Have you noticed the almost complete lack of video footage showing the ongoing Arab and US coalition aerial bombardment of Yemen’s key port city of Al Hudaydah?

“People are scared. The warships are terrifying and warplanes are flying overhead all the time,”university student Amina, 22, who lives near the port, told Reuters by telephone.

“People are fleeing the city to the countryside, but for those with no relatives there or money, there is no escape.”

Don’t expect a Yemeni version of the “White Helmets” to emerge with high-tech cameras, slick new gear, and professional uniforms capturing Yemen’s starvation and slow death under US, Saudi, and UAE warplanes.

And yet he numbers are staggering, as Reuters reports further:

The United Nations says 22 million Yemenis need humanitarian aid, and the number at risk of starvation could more than double to more than 18 million by year end unless access improves.

No, there won’t be rebel leaders in Yemen beamed into CNN studios via Skype to detail the suffering of civilians under the brutal siege, because this isn’t Syria… it’s Yemen, where the US and its allies have not only imposed a full military blockade of land, air, and sea on an urban population of half a million people, but have also ensured a complete media blackout of on the ground footage and reporting. 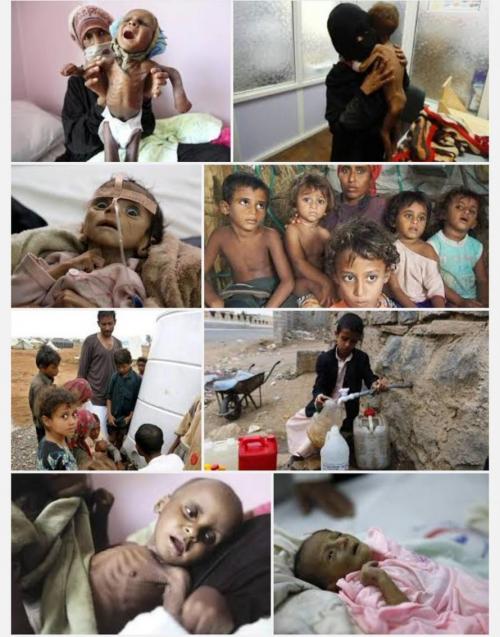 As we noted in our initial coverage the complete media and humanitarian blockade on the contested port city of Al Hudaydah means confirmation of the rapidly unfolding events have been hard to come by, though we featured what’s purported to be some of the earliest social media footage of the assault, now in its second day.

But what is firmly established concerning the conflict?

First, the Wall Street Journal has characterized the US role in the new operation as actually “deepening” as US intelligence will provide “information to fine-tune the list of targets”. The US has long been a lead and integral part of the coalition (also including Bahrain, Kuwait, UAE, Egypt, Sudan, and with the UK as a huge supplier of weapons) fighting Shia Houthi rebels, which overran the Yemen’s north in 2014.

Saudi airstrikes on the impoverished country have involved the direct assistance of US intelligence and use of American and British military hardware. Cholera has also made a comeback amidst the appalling war-time conditions, and civilian infrastructure such as hospitals have been bombed by the Saudi-UAE-US coalition. The coalition claims to ultimately be thwarting Iranian ambitions inside Yemen.

Second, the ongoing Arab and US coalition siege of Yemen’s major port city through which 80% of all humanitarian aid for the war-torn country flows could result in the greatest humanitarian disaster and mass starvation in all of recent history according to the United Nations.

The city of half a million is one of the sole lifelines of support for Yemen’s over 27 million people from the outside world, thus analysts are predicting this to be a catastrophe for the country’s civilian population in a war The New York Times notes is already “classified as the world’s worst humanitarian disaster”with “more than 75 percent of the population… dependent on food aid”.

A new Reuters report estimates that “8.4 million people are on the verge of starvation, potentially the world’s worst famine for generations.”

And yet on Thursday the US State Department announced it would resume funding for the controversial Syrian NGO state-funded group, the White Helmets, to the tune of $6.6, with presumably more American taxpayer funds to come. The group has long been exposed as essentially playing rescue squad for al-Qaeda and is a creation of international PR firms pushing for regime change in Syria.

But again, might Yemen get its own US-funded version of the White Helmets to rescue civilians?

Why is there no video or photographic media coverage of US, Saudi, and UAE bombs raining down on masses of civilians in Al Hudaydah? Of course, the answer is obvious.

Early in the Yemeni war the prestigious Columbia Journalism Review produced a short study which attempted to explain, according to its title, Why almost no one’s covering the war in Yemen (in short genocide is OK when US allies do it, according to the actions and words of Western political leaders).

Other analysts have since criticized the media and political establishment’s tendency to exaggerate Iran’s presence in Yemen and further willingness to ignore or downplay the clear war crimes of US client regimes in the gulf (the US-Saudi coalition claims it must liberate Al Hudayda to cut off Iranian weapons flowing to Houthi rebels). While Iran-aligned states and militias are framed as the region’s terrorizers, the Saudi-aligned coalition’s motives are constantly cast as praise-worthy and noble.

Meanwhile, the Pentagon has long reiterated its official (Orwellian) line that the US military’s deep level of assistance to the Saudi bombing campaign is actually geared toward reducing civilian harm. One glaring example is contained in an Al-Monitor report from earlier this year: “Speaking to reporters at the Defense Department on the heels of a meeting with Saudi Arabia’s Crown Prince Mohammed bin Salman last week, Mattis said a contingent of US advisers deployed to help with intelligence sharing are engaged in a ‘dynamic’ role to help ensure a reduction in civilian harm.”

But Al Monitor also noted that civilian deaths had continued unabated, while further quoting Mattis as saying, “This is the trigonometry level of warfare.”

So the official Pentagon line on Yemen seems to be (confirmed repeatedly this week) that as it directly assists the Saudis in dropping bombs on civilians, it is actually “helping” those very civilians.

As more people begin to wake up, they are starting to learn that the government has been putting Fluoride in the public water for years. They are also learning that despite what “experts” say, Fluoride might not be so healthy for exposure or human consumption. There is tons of information swirling around on the topic, so I Read More…

Big media attacks “fake news.” Independent reporters rightly point the finger at big media as the predominant purveyor of fake news. Oops. Here I want to comment on one of the most devious forms of MSM fake news: the limited hangout. When necessary, news outlets will do a PARTIAL EXPOSURE of a hidden crime. The Read More…

U.S.-Backed Rebels Enter Raqqa, Division Of Syria To Be Pushed After Victory

As U.S.-backed forces enter the ISIS stronghold of Raqqa, a plan to divide Syria along sectarian lines is coming to fruition. The plan is not unlike those previously used by the U.S. to divide and conquer other countries in order to exploit their natural resources and strategic value. In what some speculate may be the Read More…