With the next United States Presidential election just around the corner, another tough decision is upon the American People. Does one choose Republican or a Democrat? As those are the only choices based in reality, one must choose the lesser of two evils rather than the best candidate. With some luck it will be a toss-up between Hillary Clinton and Jeb Bush. The potential is almost too much to bear. (insert sarcasm here)

However, the truth is that Americans don’t actually have to choose either one of them. One could simply not vote, but that would do little in changing the course of the country’s current path. It would only reinforce the current power structure, and judging by the currently high inequality, corrupted bureaucracies, and utter disrespect for the

environment, that’s not a direction anyone wants to be heading.

It is extremely rare for a third party candidate to be elected into any government office, let alone the presidency. Since 1990, only two Senators and six Governors have been elected to office who were third party options. To put that in perspective, that’s only 1.2% of the time in the last 25 years. That doesn’t even take into account the zero presidential elections won by a third party.  In fact, Ross Perot accumulated the highest percentage of the popular vote for a third-party presidential candidate in over 100 years; when in 1992 he received 18.91% of the vote. That still amounted to zero electoral votes.

There are many reasons to blame for the lack of success amongst third party candidates, such as the current winner take all system as opposed to a proportional system where each party is represented by the percentage of votes it receives. There is also limited-to-no access to national debates for third party candidates. Often times they will even have trouble fulfilling all the ballot access requirements to be on all state ballots. Still the greatest obstacle for those outside the normal Democrat-Republican cycle of ineffectiveness, is money; the candidate with more money wins 91% of the time according to the Washington Post. As written in the article, “Don’t Act Surprised,” money is the driving force behind this country’s political system. One would think it would be the desire for change or even the country’s prosperity, but history has shown without a doubt that the primary motivation for politicians is personal financial gain. Everyone wants to make money, but those in an official office have an obligation to put the people’s needs above their individual success. Money being the deciding factor in the presidential election only perpetuates that cycle of profit driven politics.

However, this is not the time to panic, but instead become creative. History is there to teach. There are also many current trends that point to the fact that this could be one of ripest times in over 100 years for a third political party to emerge.

First, according to the United States Elections Project, only 36.4% of eligible voters turned out in the 2014 Midterm elections, the lowest total since 1942; a year in which most didn’t vote because they were preoccupied by a world war. Not only is voter turnout low, but Congress’ approval rating hasn’t exceeded 20% in over five years. 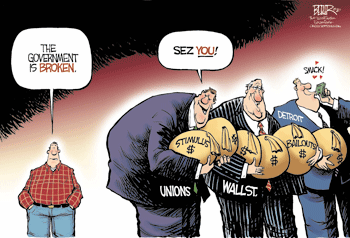 Unsurprisingly, 2014 was its lowest annual average, at a measly 14%.

At the same time, Americans are losing confidence in all mainstream media. According to a Gallup poll, Americans’ confidence in the media’s ability to report “the news fully, accurately, and fairly” is at 40%; tied with 2012 for an all time low. This is a trend that has gradually been regressing for the last 10-15 years. This is evident as the major television networks see viewership fall and newspaper circulation continues to plummet.

Undoubtedly some of this can be attributed to technology, but it seems to go with a larger trend, especially amongst people 18-29.  People are ditching the mainstream world of news and politics.

Filling the vacuum left behind by mainstream news and its biased reporting, alternative online news sites have been on the rise. With lower barriers for entry, online news grew 44% from 2012 to 2013 according to Pew Research Center. One in every six Americans now get their news from online sites as opposed to mainstream publications. One has to think with technology access growing rapidly, this will only continue to increase. So with online news taking the place of mainstream news, what is taking the place of mainstream politics?

Well nothing yet, but this is where a third party has its opening. It’s been done before. Jesse Ventura ran for Governor of Minnesota in 1998 on the Reform Party ticket. He ran on a low-budget grassroots movement and narrowly edged both the Democratic and Republican candidates. There is also current Vermont Senator Bernie Sanders, an Independent but self-described democratic socialist, who has long been a vocal proponent of media reform and public disclosure on campaign donations. He’s the longest-serving independent member in Congressional history.

There are many benefits to running outside the two parties. A new party has the advantage of creating a whole new voice without having to appease out of date ideologies and policies. While it may lack experience, it also lacks the weight of bad habits that the other parties often cling to. At the same time, this party can take ideas from both sides that have proven successful in the past and are applicable to today’s world. It is essentially a free and open platform.

If progressive democrats, environmentalists, scientists and millions of regular fed up citizens seeking truth (especially from the middle and lower classes) decided enough was enough and came together, they would soon realize they have enough power and support to change the game. A progressive democratic environmental party could arise and be a force to be reckoned with; a party linking together many of the issues their current politicians are ignoring; a party able to put minor differences in ideology aside in sacrifice for the bigger picture. This is only accomplished through massive awareness and large-scale coordination efforts. The likes of which have never been seen before.

Never in history have people been able to coordinate and spread information as they can now. If Americans can unite with the help of the Internet, there is no reason third party candidates cannot hold government offices and even one day win the presidency. Ideas and unity are stronger than any amount of money; and what can truly be lost? Americans should be striving to shape and alter the debate going forward; a crucial step in the essential process of change.

Everyone – except Jeff Sessions, it seems – knows that the War on Drugs has been a failure of massive proportions, but the Attorney General is escalating it anyway. This week, Sessions ordered federal prosecutors to seek the maximum punishment for drug offenses, reversing policy made under former president Barack Obama that was designed to reduce Read More…

Syrian state YouTube channels have been shut down this morning just as the Syrian Army’s ground offensive has officially begun. This includes the following now terminated Syrian state and pro-government channels: Syrian Presidency, Syria MoD (Ministry of Defense), and SANA. This follows YouTube reportedly closing Syria’s Ortas News last week.  It is unclear whether or not the action is part Read More…

Mike Flynn Tells FBI He Will Testify In Exchange For Immunity

In a dramatic development involving Mike Flynn, President Trump’s former national security adviser who resigned just a few weeks into his tenure over allegations surrounding his Russian connections, the WSJ reports that he has told the FBI and congressional officials investigating the Trump campaign’s potential ties to Russia that he is willing to testify and be Read More…