In the past year, nineteen states raised their minimum wage. The discussion that surrounds the topic of minimum wage tends to divide Americans into two distinct camps: the ones that think raising minimum wage is an obvious answer to boosting the economy, and those that claim it would be economic suicide. There doesn’t seem to be much middle ground, though the middle ground seems to be where one should be looking for answers. To be literal, that means somewhere in between offering every worker a minimum of $15 per hour (an idea which seemed to originate 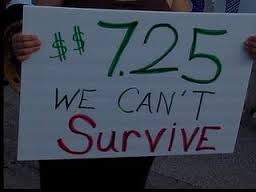 after Seattle, San Francisco, and Los Angeles proposed a plan to gradually reach that number) and basing wages off of the federal minimum wage of $7.25. The other place where one may find an answer is outside of the grounds of the minimum wage conversation altogether, and falls directly on the topic of how today’s CEO makes over 200 times more than the average employee.

Proponents of the theory that raising minimum wage would cause an economic disaster, typically subscribe to the argument that raising minimum wage without an increase in production would only further inflate the value of the dollar. They believe that this choice would cause businesses to lose money, ultimately laying off workers, which would then contribute to even more unemployment. In fact, they would venture to say that if one does not see the logic in this perspective, that one most likely does not understand economics. Well, in this case, pure economics fall short of providing a solution, and the reality is that when workers receive enough compensation to live without government assistance, as many full-time workers aren’t able to do, production naturally increases.

It seems quite apparent that when a worker’s quality of life improves, productivity does increase. A job that respects its employee’s basic needs produces workers that respect the job’s basic needs. This seems like an honest trade. Take, for example, the experiment that The Container Store did by significantly raising every worker’s pay, which resulted in a huge boost in productivity and in sales. Their CEO Kip Tindell is quoted as saying, “A funny thing happens when you take the time to educate your employees, pay them well and treat them as equals… You end up with extremely motivated and enthusiastic people” (Jennifer Koch, “Thinking Outside the Box at the Container Store”). Some people who subscribe to the idea that minimum wage shouldn’t be raised will also say that it’s a worker’s choice to stay at a job that doesn’t pay them well. Really? With so many people out of work, many of whom were laid off from well-paying jobs, there are too many people taking the menial jobs that were once meant for the average 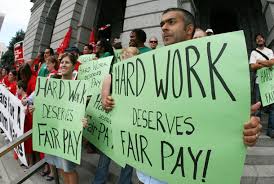 high school or college student. Even the argument that if workers aren’t happy with these menial jobs that they should simply go back to school falls short of a solution, considering how big of a risk student loan debt can be with tuition prices higher than ever.

This doesn’t mean that minimum wage should be bumped up to $15. This does mean, however, that wages need to be better tailored to the different costs of living throughout the country. Maybe one can just scrape by in largely rural states on $7.25 an hour, but even $8.23 an hour in a state like Colorado, which seems to have an average cost of living, won’t get anyoneF very far. It will definitely still qualify an individual for food stamps, even while working 40 hours per week. It would seem counterproductive to have workers handling the rigors of an entry-level job, fresh from the line at the food stamp office, exhausted from a night shift at their second job, while struggling to pay bills and feed a family. Would a minimum of $10 an hour put proprietors out of business if a fairly decent product was being produced or service offered? Most likely not.

A large part of turning out quality business and goods is having and retaining quality workers. Recently, the economy has seen more turnover than ever before, something that the older generation (who are coincidentally mostly Right Wingers) blindly attribute to “millennials.” It’s said that millennials can’t focus on one job, or even one task at a time because, well, smartphones. In reality, millennials haven’t had a reason to stay at one job for very long because pay is generally so low, especially for workers without degrees. Why continue to beat a dead horse? This turnover contributes to constantly having to train new workers, who soon find out that they’re not being paid enough to live in a safe neighborhood, buy food, pay for gas, etc. They quit, and the cycle perpetuates. Quality workers are made when employees have a reason to stay at a business; to care about the business, and become an expert on the related field. As a result, customers get better quality care, and business thrives. From that perspective, aren’t employees the most important investment?

The excuse that there isn’t enough money to go around is just that: an excuse. According to the Economic Policy Institute, CEOs currently make, on average, 273 times more than their workers. In the 1960’s, that number was 20. The idea that these higher-ups need the money more than the middle class because they are “job creators” is a huge misconception. The former US Secretary of Labor, Robert Reich, explains in his documentary Inequality for All, that the 1% are more likely to sit on their money than create opportunities for others with it. A cut anywhere under $40-50k per year from their inflated salaries would enable most business owners and CEOS to give their existing workers a dollar or two more per hour, without even noticing the cut. To blame the looming, omnipotent “Board” of these companies for high CEO salaries is to say that CEOs have no reason or responsibility to fight for living wages for their workers, who are essentially the backbone of their businesses. These types of businesses are contributing nothing to society other than malnourished, unhappy, indebted, exhausted people, and likely a cheap and poor-quality product or service that society is probably better off without.

People are the bread and butter of this economy, and it fares employers well to treat them as such. Continuing to widen the gap between the haves and the have-nots does nothing but make a few greedy people feel happy for a moment, until they need to take some more. The difference between $8 an hour and $10 an hour can be the difference between employees needing government assistance or having total autonomy; having sufficient amounts of food to put on the table or skipping meals; or even deciding to stay at a company or leaving for one that might pay just a few cents more. What works for Seattle, San Francisco, and Los Angeles (which happen to be cities with very high costs of living) might not be practical for the rest of the country. By no means should every city aim to immediately give all workers $15 an hour, (although, considering the excess that gets doled out to CEOs, it does seem doable) however, leveling the playing field and making sure that full-time workers aren’t lining up at their local food stamp office seems to be something that America, a self-proclaimed “global superpower”, should be capable of.

Andrea Alexander
Andrea is a native of Southern California and has been living in Colorado since 2012. She is a huge fan of Free Speech TV, Pacifica Radio, and Thom Hartmann. Andrea’s focus is primarily to cover issues regarding education, living wages, health, and while she does not use marijuana, she is an advocate of its legalization and cracking open the guise of the “War On Drugs” to reveal the real war on poverty and equality.

Welcome to The Daily Wrap Up, a concise show dedicated to bringing you the most relevant independent news, as we see it, from the last 24 hours (5/23/18). From a federal judge ruling that Trump can no longer block people from his Twitter account, to the NFL officially banning players from kneeling during the National Read More…

The Choose-Your-Own-Reality Theory Of Terror, Mass Shootings And Spiritual Warfare

By now, every possible angle of the Las Vegas shooting has been expounded upon by anyone with a website or a YouTube channel. Without a doubt, something doesn’t add up, but, we’ve gone through this before, many times now, and it never adds up. And it won’t ever add up, because the self-proclaimed authorities will never Read More…