This piece will continue our look into Bill Gates and the Bill and Melinda Gates Foundation. Please see part 1 before reading. In part 2,  we will focus on the role the Foundation has played in the response to COVID-19, as well as the influence the organization has on global health institutions.

Before we dive into the current COVID-19 crisis, a bit more background on Gates is needed. In the last piece we discussed the history of the Gates Foundation’s investments. What is important to note is that by using the Foundation as the front organization, Gates can donate and influence hospitals, universities, media, governments, and health organizations. The Foundation clearly has the ability to shape the decisions made by some of the institutions they fund, including when these decisions go against the desires of the masses they claim to be helping.

For example, in 2017 Independent Science News released a report detailing how the Bill and Melinda Gates Foundation paid PR firm Emerging Ag $1.6 million to “recruit a covert coalition of academics to manipulate a UN decision-making process over gene drives.” Emails released by Freedom of Information Act Request reveal that the Gates’ recruitment effort was part of a plan to “fight back against gene drive moratorium proponents.” Gene drives are a controversial genetic extinction technology promoted as a way to eliminate mosquitoes with malaria, agricultural pests, and invasive species.

At the 2016 United Nations Convention on Biological Diversity, 179 international organizations called for a UN moratorium on gene drives. The opponents of this technology also circulated a letter, “A Call for Conservation with a Conscience: No Place for Gene Drives in Conservation,” signed by 30 environmental leaders who called for a “halt to all proposals for the use of gene drive technologies, but especially in conservation.” The Gates Foundation is heavily invested in gene driving technology and was not happy to see a diverse and unified push-back against gene driving. The Foundation hired Emerging Ag — who have their own web of connections to Big Pharma and Big Ag — to shut down the opponents of gene driving. Emerging Ag was successful and the moratorium was shot down.

Coincidentally, in 2016, the US National Academy of Sciences released a report on gene driving which was co-funded by the Defense Advanced Research Projects Agency (DARPA) and the Bill and Melinda Gates Foundation. DARPA is also invested in gene drive research. As The Guardian noted after the release of the NAS report:

Moreover, Jim Thomas of the ETC Group, which monitors the impact of emerging technologies and corporate strategies on biodiversity, agriculture and human rights, told ISN that he believes gene drives are potential biological weapons that could have a “disastrous” impact on human life and food security. “The fact that gene drive development is now being primarily funded and structured by the US military raises alarming questions about this entire field,” he stated.

“This is also not the first time that the Gates Foundation has used academics to influence public and private opinion on genetic engineering technologies, as witnessed by its funding of the Cornell Alliance for Science.”

The private emails obtained by Independent Science News add to the mountains of evidence detailing how Gates is able to pressure organizations to carry out his interests, and that of his foundation. 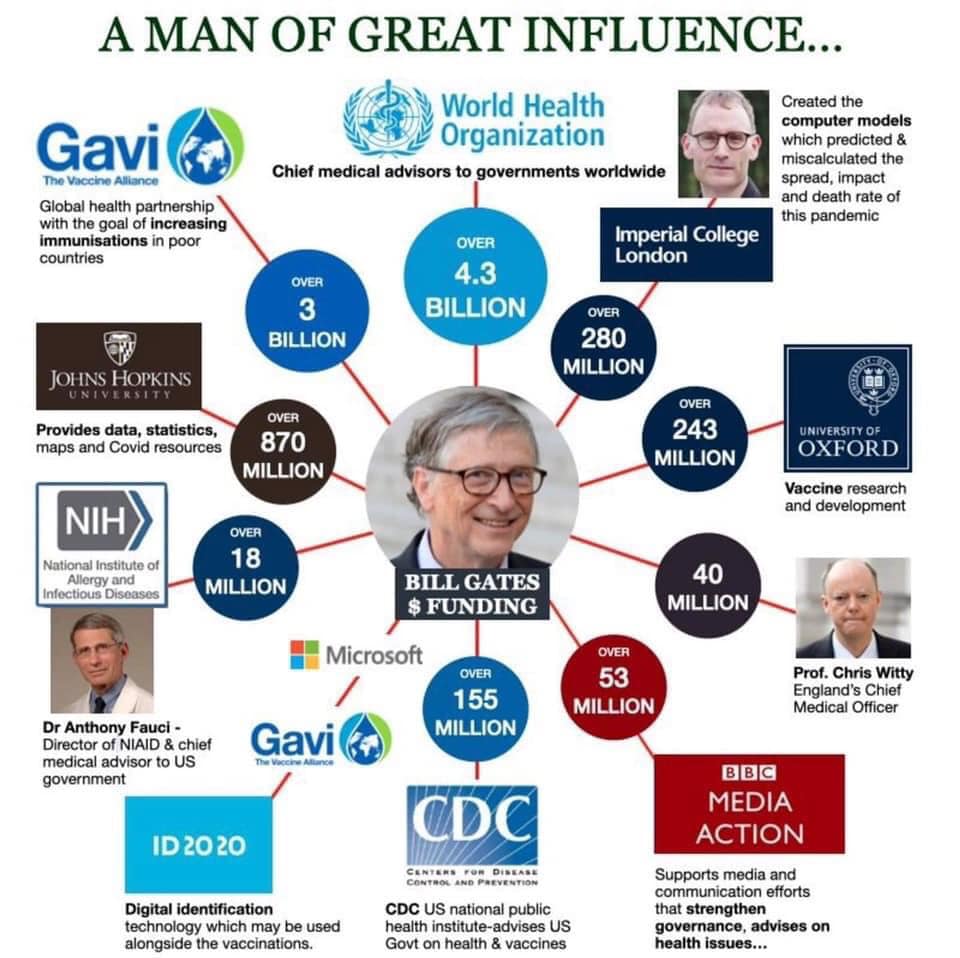 Considering these alarming reports of Gates’ influence on public health policy, it is important to take a moment to examine the current response to COVID-19. When we look at the players and institutions involved, do we see Gates’ influence and money? If so, what does this mean for public health? Will Gates’ mammoth influence and finances allow him to personally direct the course of the COVID-19 recovery?

Let’s start by looking at Dr. Anthony S. Fauci, Director of National Institute of Allergy and Infectious Diseases (NIAID), part of the National Institutes of Health, and a leader in the fight against COVID-19. Unfortunately, when it comes to Fauci and NIAID we clearly see the influence of Bill Gates. In 2010, NIAID and the Bill and Melinda Gates Foundation announced their “Decade of Vaccines Collaboration,” calling for coordination across the “international vaccine community” and the creation of a “Global Vaccine Action Plan.” Dr. Fauci was appointed to the Leadership Council of the partnership. Similarly, Bill Gates has been partnering with the NIH for several years. 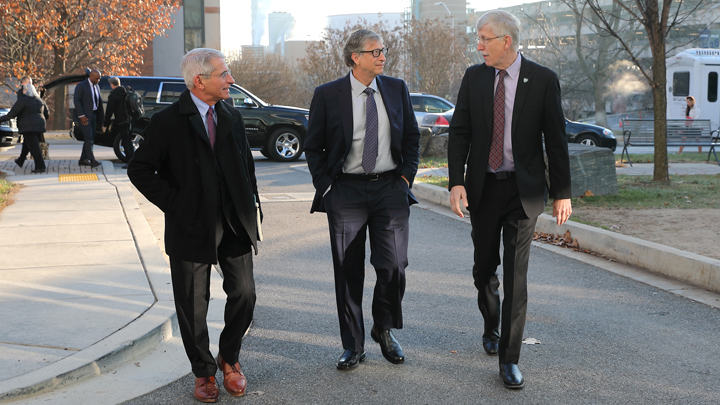 In late April, the news broke that Fauci’s NIAID donated a total of $7.4 million to research involving bat coronaviruses. The investments added fuel to the theory that COVID-19 might be a bioengineered virus which was purposefully or accidentally released from the Wuhan Institute of Virology in Wuhan, China. The news of the funding begs the obvious question; did Gates’ money influence or fund the NIAID’s coronavirus research? Time will tell.

Another important player with connections to Gates is Dr. Deborah Birx, an American physician and diplomat serving as the United States Global AIDS Coordinator for Presidents Barack Obama and Donald Trump since 2014. She is currently the Coronavirus Response Coordinator for the Trump Administration’s White House Task Force. Birx also sits on the Board of The Global Fund, an organization which was promised a $750 million investment by the Bill and Melinda Gates Foundation in 2012. The Global Fund also features board member Kieran Daly, the Deputy Director of Global Policy and Advocacy for the Gates Foundation.

“The Bill & Melinda Gates Foundation is a key partner of the Global Fund, providing cash contributions, actively participating on its board and committees, and supporting the Global Fund’s advocacy, communications and fundraising efforts,” the Global Fund states.

The Johns Hopkins University has been an equally important member of the global response to COVID-19. The university’s calculations of global infection and death rates are commonly cited in mainstream media. Yet, once again, we find the Bill and Melinda Gates Foundation has been investing in Johns Hopkins for two decades.

Finally, it was recently reported that the organization known as the Wellcome Trust has partnered with the Bill and Melinda Gates Foundation and MasterCard to “catalyze the initial work” of the COVID-19 Therapeutics Accelerator. The Accelerator is supposed to accelerate and evaluate “new and repurposed drugs and biologics to treat patients with COVID-19 in the immediate term.” What was not mentioned is that the Gates Foundation has been a “Trustee” of the Wellcome Trust for several years. Interestingly, in 2017, Mark Henderson, Director of Communications for Wellcome Trust participated in a panel called “Deep Dive: Preventing Pandemics.” Dr. Anthony Fauci also participated in the panel discussion.

One could chalk up Fauci and Wellcome Trust’s involvement with a panel about pandemics as perfectly reasonable — after all, these are professionals who are focused on global health. However, to ignore that Bill Gates’ fingerprints are all over the global health industry would be a mistake.

Based on The Gates Foundation’s track record of hiring PR firms to shut down detractors or using their money to influence institutions, one could be forgiven for assuming that the foundation would not be high on the list of potential leaders for a public health crisis. Unfortunately, as of May 2020, Bill Gates and his Foundation are still being promoted as heroes in the fight against COVID-19.

Who Is Running the WHO?

Since the outbreak of COVID-19, both Bill Gates and the World Health Organization have stepped onto the center stage as the world looks to them for answers. By now, it is common knowledge that the Bill and Melinda Gates Foundation is the number one non-state donor to the WHO. The United States has been the top state donor but that may change under the Trump administration. Gates was also the first non-state individual to give a keynote address to the WHO general assembly.

According to a report by Politico, Bill Gates’ opinion (and money) has so much influence on the WHO that officials privately call it “the Bill Chill.” Sixteen officials speaking on the condition of anonymity told Politico that Gates has an out-sized influence on the politics of the WHO and few dare challenge him. “He is treated liked a head of state, not only at the WHO, but also at the G20,” a Geneva-based NGO representative stated.

The accusations of Gates’ influence were seconded by Foreign Affairs when they reported that “few policy initiatives or normative standards set by the World Health Organization are announced before they have been casually, unofficially vetted by Gates Foundation staff.”

The WHO’s current Director General is Tedros Adhanom, a former Health Minister of Ethiopia. During his tenure as Minister of Health of Ethiopia, Tedros collaborated with the Clinton Foundation and the Bill and Melinda Gates Foundation to work on vaccines, among other health measures. Politico reported that prior to Tedros being selected for the WHO position in 2017 Gates was accused of supporting Tedros and using his influence to help win the nomination.

While most of the member country delegates expressed their belief that Gates is well intentioned, some feared that the Gates Foundation’s money comes from “big business” and could “serve as a Trojan horse for corporate interests to undermine WHO’s role in setting standards and shaping health policies.”

The most important takeaway is that the fees paid by WHO member countries account for less than a quarter of the $4.5 billion biennial budget — leaving Gates, governments, and other foundations to fill the gap. These donations are allocated for specific projects and the WHO cannot decide how to use them. In the case of the Bill and Melinda Gates Foundation, those funds typically go towards vaccine programs.

No matter which way you approach the solutions being presented as the answer to the COVID-19 pandemic you will find Bill Gates’ fingerprints. Repeatedly he has used his money and influence to profit and steadily gain power without ever being elected to political office.

In part 3 of this investigation we will examine the strategies Bill Gates has called for in response to COVID-19. We will also see how Bill Gates and the Rockefeller family have both been predicting a situation like the one we are currently witnessing unfold. Finally, we will show how this crisis presents the perfect opportunity for Gates and his cohorts to reap massive profits and position themselves at the head of an emerging Technocratic State.

Derrick Broze, a staff writer for The Last American Vagabond, is a journalist, author, public speaker, and activist. He is the co-host of Free Thinker Radio on 90.1 Houston, as well as the founder of The Conscious Resistance Network & The Houston Free Thinkers.


This was a very good report. Currently, I’m in Facebook jail (again) after spreading “misinformation” about guess who? BILL GATES, so Im unable to comment on your timeline.
I also highly recommend The Corbett Report and James Corbett brilliant 4part documentary series on Gates.. It’s honestly the best doc out there. Too bad it will never make it to Netflix!


One correction is needed: Tedros Adhanom is NOT a physician.