“Political language is designed to make lies sound truthful and murder respectable, and to give an appearance of solidity to pure wind.” George Orwell

Americans shared a combination of shock and exuberance when President Obama made his statement to The New Yorker in regard to alcohol being more dangerous than marijuana. This raised many questions as well as a call to action that was clearly heard by those waiting for the right moment. 18 members of Congress went 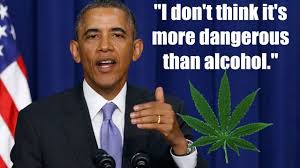 as far as to send Obama a formal letter indicating their strong desire to reevaluate how the federal government regulates marijuana. One would think this statement was the herald of change. However, the Obama administration set out to dance around the issue while continuing to drag their feet.

This statement was made by Attorney General Eric Holder, and clearly, 18 members of Congress sending formal requests for action in the previous months, represents just the proposal that this statement suggests has yet to be made. Under the federal Controlled Substances Act, the attorney general has the authority to “remove any 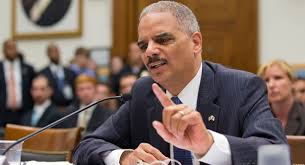 It has become commonplace to see politicians give statements they know to be false; relying on the fact that the average American doesn’t know the inner workings of Congress. This is exactly the type of political misrepresentation that is holding this country back from once again representing what it set out to be. There are more lies, slander and outright criminal activity in the American political process than is healthy for a society. It goes against everything this culture preaches to its youth, to the world and to itself. So one must ask themselves: Why is this allowed to continue?

There are many reasons a politician or law enforcement agency would purposely avoid the truth when discussing marijuana regulation. Many might have a misguided need to fight for the unknown lie they were charged with enforcing, however most have an ingrained fear of being seen as soft on drug enforcement. This fear drives most politicians to ignore the obvious facts, and one can only imagine how many must be sadly aware that they are slowly finding themselves on the wrong side of history.

Former Drug Enforcement Administration Chief Michele Lionhart said that shifting public opinion would only drive her to “fight harder” against the acceptance of marijuana in America. The majority of Americans agree with marijuana legalization, yet both law enforcement and political officials blatantly disregard the will of the people. When one considers the fact that these are the very officials charged with defending and enforcing the American democratic process, which is dictated by the majority vote, these statements and actions border on un-American. It leaves a resinating taste in one’s mouth that screams, “Despite your opinion, we know what is best for you.” For a government official to state outright that public opinion will only make her fight harder against it, one must assume that this country has found itself in a very dangerous and precarious place.

It should be clear to most that this country stands on a precipice. It walks the blade of a knife, where it has become unclear as to which side will be the end destination. The Marijuana Movement has brought many issues to light that were previously glossed over. By allowing the public to see, in live time, that the majority’s will is no longer being represented by its elected officials, many other unnoticed steps in the wrong direction are rising to the surface. The responsibility of guiding this country away from the proverbial rocky shore rests squarely on the shoulders of its citizens. If the United States finds itself unrecognizable when compared to the true republic it was founded as, it will be due to the lack of action of its people. It is the duty, no, the right of the American people to designate the true north of democracy.

Welcome to The Daily Wrap Up, a concise show dedicated to bringing you the most relevant independent news, as we see it, from the last 24 hours (11/03/18). As always, take the information discussed in the video below and research it for yourself, and come to your own conclusions. Anyone telling you what the truth Read More…

Welcome to The Daily Wrap Up, a concise show dedicated to bringing you the most relevant independent news, as we see it, from the last 24 hours (10/4/19). As always, take the information discussed in the video below and research it for yourself, and come to your own conclusions. Anyone telling you what the truth Read More…

Welcome to The Daily Wrap Up, a concise show dedicated to bringing you the most relevant independent news, as we see it, from the last 24 hours (9/7/20). As always, take the information discussed in the video below and research it for yourself, and come to your own conclusions. Anyone telling you what the truth Read More…

One Reply to “Obama Administration Dances Around Marijuana Legalization”