There will never, ever be another Adolf Hitler.

Consumers of mainstream culture have been trained to watch out for the next Hitler the way evangelical Christians are trained to watch for the second coming of Jesus. References to Hitler are ubiquitous in movies, television, literature, and of course in political discourse, and understandably so; he is the clearest, purest example of evil in living memory. A genocidal dictator leading humanity into world war with the explicit agenda of totalitarian global domination is indeed as stark an example of an evil human being as you could possibly imagine, and serves as a philosophically unassailable “NOT THIS WAY” sign for our species. The saturation of our culture with that sign is why Godwin’s law (“As an online discussion grows longer, the probability of a comparison involving Hitler approaches 1”) is a thing; any time you want to tell a stranger that their ideas could lead in an undesirable direction, it becomes increasingly tempting to throw up the “NOT THIS WAY” symbol that Adolf Hitler has come to represent.

But history doesn’t repeat itself. No one will ever show up acting like the thing we’ve all been taught all our lives to never, ever act like and saying the things we’ve all been taught to never, ever say and be elevated by the masses the way Hitler was. It will not happen. The next enemy of humanity would have the good sense to present as completely different from the way Adolf Hitler presented in order to seize power, and, since we’ve all been trained to bristle at anything resembling him, would actually do well to present as his diametric opposite.

If you are watching out for the next powerful enemy of humanity who presents the way Adolf Hitler presented, you will be waiting the rest of your life. And you will have missed the fact that we already let the next enemy of humanity in through the front door.

The small, politically impotent group saying “We’re fascists! Look what evil scary fascists we are!” will always be far less dangerous than the lackeys of plutocrats and secretive government agencies advancing totalitarian oppression while saying “We love freedom and democracy!”

Despite all the warnings that we were given in the lead-up to the 2016 election about the Nazi dystopian future America would quickly find itself in should Queen Hillary fail to be properly coronated, what we have actually seen since Trump’s election is a foreign policy that is in practice almost indistinguishable from that of his globalist predecessors, and a domestic policy which sees George W Bush campaigning for Trump’s virulently pro-establishment Supreme Court nominee. When you strip away the blind, fawning hero worship of his supporters and the shrieking, garment-rending hysteria of his opponents, instead examining the actual behavior of this administration, the sitting president looks an awful lot like a fairly conventional Republican scumbag with about as many differences from Obama as Obama had from Bush.

And, to be clear, that is a bad thing. Both Trump supporters and Trump haters get upset whenever I say that this president is not significantly different from his predecessors in any meaningful way outside of rhetoric and narrative, Trump supporters because they believe he is a populist hero and Democrats because I’m disputing the narrative that he’s Literally Hitler. But I don’t say this because I like upsetting everyone, I say it because it’s extremely important to be absolutely clear about what is happening here if we ever want to turn things around for the fate of our species. Trump’s election did not represent the arrival of a new Hitler-like monster, the monster was already here. The call is coming from inside the house. 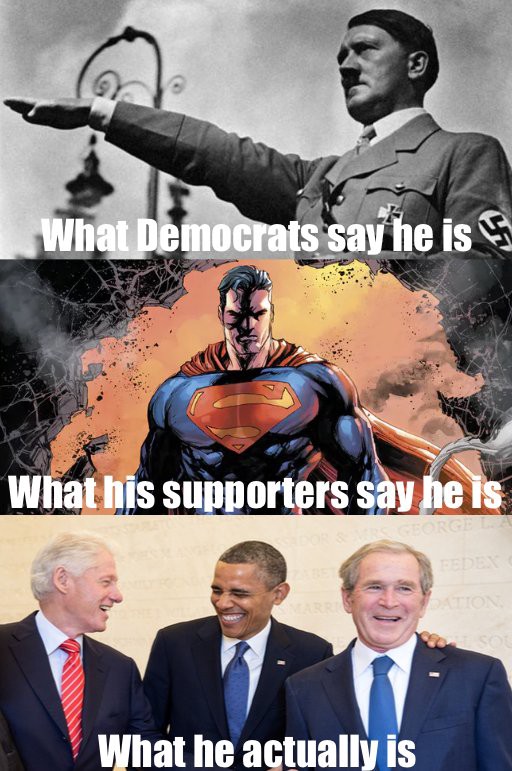 Trump, like all US presidents, is entirely beholden to an alliance of plutocrats and secretive government agencies which comprises the “steady state” and ensures the continuation of policies and agendas throughout the coming and going of America’s official elected government. This alliance spans far outside America’s borders to any government, agency, oligarch or faction it can absorb into its blob, and the agendas and policies it protects and advances are not geared toward the interests of any nation or its people. It is an alliance of the powerful geared exclusively toward amassing more power for the powerful.

While so-called antifascists run around punching impotent racists to prevent the rise of fascism, this extremely powerful alliance of plutocrats and secretive government agencies is advancing totalitarian oppression and global domination on a scale Mussolini only dreamed of. While Democrats scream “Orange Hitler” at the top of their lungs at a passing deep state lackey, Hitler’s sitting in the driver’s seat dressed in drag.

The monster who looks like a monster is always far less dangerous than the monster who looks like a nice guy. If this isn’t obvious to you then you simply haven’t lived enough. There is an ecocidal, omnicidal Orwellian power establishment which is driving our species toward extinction via climate chaos or nuclear holocaust, which will lock us down into a pasteurized, homogenized mind control dystopia of servitude even if we manage to survive those threats. While everyone’s flailing their weapons around attacking anything that looks like it might maybe be the next Hitler, these bastards are tightening the noose further and further every day. Wake up.

All Data Points To COVID-19 Starting In The US & Numerous Agendas Kick Off; UBI, Forced Vaccination

Welcome to The Daily Wrap Up, a concise show dedicated to bringing you the most relevant independent news, as we see it, from the last 24 hours (3/17/19). As always, take the information discussed in the video below and research it for yourself, and come to your own conclusions. Anyone telling you what the truth Read More…

In April 2015 the National Institute of Drug Abuse acknowledged that cannabis kills cancer cells and dramatically reduces the growth of new brain cancer cells. This was a startling admission, considering that federal government’s position on cannabis retains it as a Schedule 1 drug with “no medical benefit.” Research has continued despite this roadblock, and now the Read More…