On Friday the State Department announced it is evacuating all non-essential personnel from the US consulate in Basra, Iraq.

The drastic move comes after a month of heavy anti-Iran and anti-Iraqi government protests that have gripped the southern city, which has led to sectarian rioting and the burning of Shia militia buildings, as well as the torching of the Iranian consulate early this month. During the first week of September the US embassy in Baghdad’s green zone also came under attack by mortar fire, which US officials and military analysts blamed on Iran-backed militias.

Secretary of State Mike Pompeo cited threats from Iran as the reason for ordering the Basra consulate evacuation, and in a separate statement a senior US official confirmed to CNN that the “ordered departure” was due to “security threats from Iran.”

“US Embassy Baghdad will continue to provide consular services to US citizens in Basra,” the State Department said in its statement referencing the massive and highly fortified US compound in Iraq’s capital, which the Basra consul staff will evacuate to. It also issued an updated travel advisory for Iraq noting the removal of non-essential personnel from Basra.

Pompeo explained the evacuation order further as, “Threats to our personnel and facilities in Iraq from the Government of Iran, the Islamic Revolutionary Guard Corps Quds Force, and from militias facilitated by and under the control and direction of the Quds Force leader Qasem Soleimani have increased over the past several weeks.”

Pompeo further noted that “there have been repeated incidents of indirect fire from elements of those militias directed at our Consulate General in Basrah and our Embassy in Baghdad, including within the past twenty-four hours.”

The US Consulate in Basra, view from within the security perimeter: 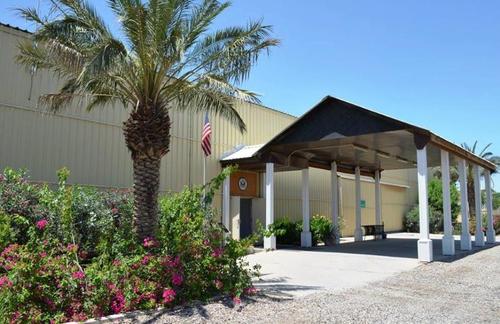 “I have advised the Government of Iran that the United States will hold Iran directly responsible for any harm to Americans or to our diplomatic facilities in Iraq or elsewhere and whether perpetrated by Iranian forces directly or by associated proxy militias,” the Secretary of State said.

A number of Iraqi cities exploded in anti-government protests in the first week of September, which had strong sectarian element as largely Sunni demonstrations demanded the end of Iranian influence on the Baghdad government and the retreat of Shia Iran-backed militias.

But also amidst the early September protests ten pro-Iran Shia militias in the country had published a statement vowing to expel foreign troops and advisers by force if they didn’t immediately leave Iraq.

“We will deal with them [foreign troops in Iraq] as occupying forces, and we will use our legitimate rights by employing all possible means to force them out of the country,” the Iraqi factions warned, adding that foreign troops were “in their sights”. The statement also alleged an “Anglo-American-led dirty and dangerous conspiracy to impose a devilish coalition” on the people of Iraq which seeks to weaken the government and make Baghdad a puppet of Brett McGurk, who is the White House appointed special envoy for the anti-ISIL coalition.

Meanwhile in a speech given before Friday worshipers in Tehran Iranian officials issued threats against the United States military, and laid down “red lines” against US allies Saudi Arabia and the United Arab Emirates. Iran has blamed the US and its Gulf allies for sponsoring a terrorist attack on a military parade in the southwest city of Ahvaz last Saturday which killed 25, including IRGC personnel among the victims.

“If America does anything wrong, their bases around Iran would not remain secure,” Ayatollah Mohammadali Movahedi Kermani was quoted as saying by Mizan news agency while leading Friday prayers in Tehran.

And simultaneously the Fars news agency quoted Brigadier General Hossein Salami, deputy head of the IRGC, as saying in reference to the Saudis and Emirates: “If you cross our red lines, we will surely cross yours. You know the storm the Iranian nation can create.”

After Venezuela’s Election, U.S. And Allies Turn Up Heat – A Coup Could Be Ahead

The Trump administration has described Sunday’s constituent assembly election in Venezuela as “another step toward dictatorship,” despite high voter turnout and little evidence that the assembly will dissolve the country’s legislature. Will Venezuela be the CIA’s next regime change target? CARACAS — According to the U.S., its allies, and an ever-obedient mainstream media, Venezuela’s election this Read More…

Congresswoman Says US Is Arming ISIS, Introduces Bill to Stop It

Democratic Congresswoman Tulsi Gabbard has broken free of the corporate media’s narrative by accusing the United States of funding and arming terror groups al-Qaeda and ISIS. “If you or I gave money, weapons or support to al-Qaeda or ISIS, we would be thrown in jail,” Gabbard tweeted on Saturday. If you or I gave money, Read More…

Welcome to The Daily Wrap Up, a concise show dedicated to bringing you the most relevant independent news, as we see it, from the last 24 hours (12/14/21). As always, take the information discussed in the video below and research it for yourself, and come to your own conclusions. Anyone telling you what the truth Read More…