It is commonly known that when a ship is sinking, the crew does not board the lifeboats before the passengers. Most noble of all is when the captain and crew go down with the ship. Then with what level of ignobility should we assess the so-called “Syrian Civil Defense” more commonly referred to as the White Helmets?

We are told that Syrian forces backed by Russian airpower are brutalizing the remnants of “rebels” in southern Syria near the Jordanian border and the Israeli-occupied Golan Heights. Surely now more than ever do the people of southern Syria need the “bravest of the brave” – as UK Foreign Secretary Jeremy Hunt described them on social media.

Yet instead of rushing to where the cannons sound loudest, the White Helmets slunk across Syria’s borders with the aid of the Israeli Defense Forces, onward to Jordan, where the UN is working to relocate them – allegedly to Europe and North America.

It is a final act laying to rest once and for all a monumental lie – that the White Helmets were anything more than an extension of the foreign-funded proxy war aimed at overthrowing Damascus.

And now that overthrowing Damascus is no longer a possibility, the White Helmets are being evacuated to lie another day.

The White Helmets were never “rescuers,” but a public relations wing of Al Qaeda and its various affiliates. The US did not arm and funded terrorists for years to ravage Syria only to “also” fund groups to help save lives. Instead, the White Helmets’ only real mandate was to augment the proxy war, exploiting humanitarian themes similar to how the US and NATO justified and executed the destruction of Libya.

Videos of clearly uninjured individuals – showered in dust and red paint – rushed to awaiting ambulances often feature more cameramen in the frame than supposed rescue workers. Absent from the vast majority of the White Helmets’ videos is the actual gore, horror, and misery of real war – gaping wounds, dangling or missing limbs, burnt flesh and hair – all the horrors real Syrians faced daily since 2011 when the US-backed proxy war began. 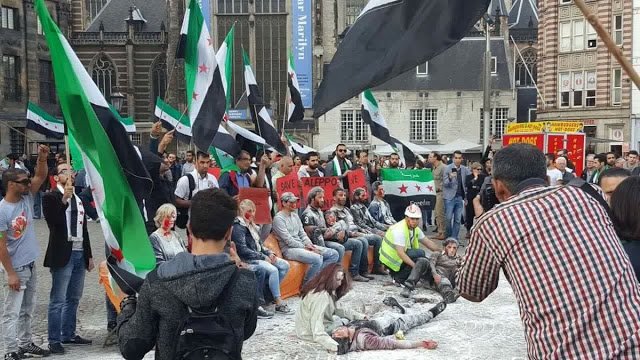 During the 2016 “Save Aleppo” protests held by the Syrian opposition across Europe, actors were dressed up, dusted and painted up with artificial blood, then posed in scenes indistinguishable from their Syrian-based counterparts’ videos. What was supposed to be another emotional gimmick aimed at manipulating the Western public to back wider Western military intervention, instead served as an indictment of precisely the game the White Helmets had been funded by the US and British governments to play amid Syria’s ongoing war.

The Guardian in a hastily written rebuttal to avalanches of evidence exposing the White Helmets of not only producing war propaganda, but doing so on behalf of Al Qaeda and its affiliates, would claim:

The White Helmets, officially known as the Syria Civil Defence, is a humanitarian organisation made up of 3,400 volunteers – former teachers, engineers, tailors and firefighters – who rush to pull people from the rubble when bombs rain down on Syrian civilians.

They’ve been credited with saving thousands of civilians during the country’s continuing civil war.  They have also exposed, through first-hand video footage, war crimes including a chemical attack in April. Their work was the subject of an Oscar-winning Netflix documentary and the recipient of two Nobel peace prize nominations.

Indeed, the White Helmets have provided evidence of chemical weapons attacks – as noted by multiple OPCW (Organisation for the Prohibition of Chemical Weapons) reports – but it is evidence the OPCW has never been able to verify.

The reason why the OPCW was never able to verify the evidence was because the White Helmets who allegedly collected and transferred it over to OPCW investigators operate exclusively in territory held by terrorists fronts – most notably Al Qaeda’s various affiliates. 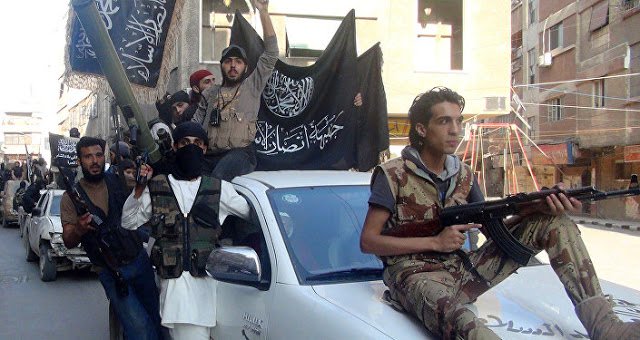 The OPCW would report regarding the April 2017 alleged chemical weapons attack in Khan Sheikhun that (emphasis added):

…it was determined that the risk of a visit to the incident area would be prohibitive for the team. Therefore, the team could not visit the site shortly after the allegation to observe, assess, or record the location of the alleged incident, could not canvass directly for other witnesses, and could not collect environmental samples and/or remnants of the alleged munitions.

This meant that all evidence and witness testimony considered by the OPCW was handed to them. The OPCW admits (emphasis added):

Through liaison with representatives of several NGOs, including Same Justice/Chemical Violations Documentation Centre Syria (CVDCS), the Syrian Civil Defence (also known as White Helmets, and hereinafter “SCD”), the Syrian American Medical Society (SAMS), and the Syrian Institute for Justice (SIJ), the FFM identified a number of witnesses to be interviewed. These witnesses were expected to provide testimony and potentially relevant evidence.

The report admits it was the White Helmets who allegedly were first to arrive at the scene of the attack and repeatedly cites them throughout the report as the primary source of accusations regarding the attack. The report would note (emphasis added):

As to what risks prevented the OPCW team from collecting the evidence itself instead, a Deutsche Welle article titled,”Death toll rises in Syria ‘gas attack’,” would provide a clue:

Idlib province, where Khan Sheikhun is located, is mostly controlled by the Tahrir al-Sham alliance, which is dominated by the Fateh al-Sham Front, formerly known as the al-Qaeda affiliated al-Nusra Front.

Thus, the OPCW was not able to visit the site because it resided in territory occupied by Al Qaeda’s Syrian branch, Al Nusra. This fact is also why we do not see Western media personalities on the ground embedded with their supposed “moderate rebels,” because none exist.

The White Helmets – however – are wherever Al Qaeda is – and it was Al Qaeda’s “cameramen-corpsmen” who supposedly responded to the Khan Sheikhun chemical weapons attack, allegedly collected samples, and passed them to the OPCW.

Because there was no onsite investigation and the samples the White Helmets handed to the OPCW could have originated anywhere, no conclusion regarding what attack if any took place could be made, let alone any blame be assigned for the attack. Yet the Khan Sheikhun incident prompted the United States to carry out an assault on Syrian targets with 59 cruise missiles.

It was a clear case of US-funded provocateurs staging an incident, the US rushing through justification to strike Syria by sidestepping evidence or lack thereof, and then the West collectively weathering the fallout as the June 2017 OPCW report was published, revealing the absolute lack of evidence linking the Syrian government to the attack.

It is a pattern that has repeatedly played out – each time the OPCW being unable to access sites of alleged chemical weapon attacks because they reside in territory occupied by dangerous terrorists, the White Helmets’ “chemical sample units” handing over evidence impossible to verify, and the US rushing through military strikes on Syria before investigations can be conducted and reports are published and analyzed.

Thus the White Helmets serve verifiably as a war propaganda tool – enabling the US to pressure Syria and carry out military strikes any time the Syrian government makes significant advances toward positions admittedly occupied by Al Qaeda. As to claims of the White Helmets “saving thousands of civilians,” this remains impossible to verify specifically because just as the OPCW has no access to territory the White Helmets and their Al Qaeda associates occupy, neither do independent organizations tasked with verifying anything else the White Helmets have claimed.

Rescue workers don’t abandon the people they have sworn to protect. The White Helmets clearly never honestly swore to protect anyone. As Al Qaeda’s propagandists, they are being evacuated alongside militants and other support personnel cornered by the Syrian government’s advances.

The Guardian would report in its article, “UK agrees to take in some White Helmets evacuated from Syria by Israel,” that:

The UK is willing to offer asylum to some of the 500 members or relatives of the Syrian volunteer civil defence forces known as the White Helmets who have been rescued from Syria and evacuated to Jordan, the Guardian has learned.

The White Helmets and their families were evacuated by Israeli defence forces on Saturday night, crossing from northern Israel into Jordan at three points. The Israelis had initially put the numbers evacuated at 800, but later the figure was revised downwards by James Le Mesurier, a former MI5 officer who is considered to have founded the group in Turkey in 2013.

Thus, allegedly, hundreds of White Helmets – who worked with and for Al Qaeda – will now be scattered across Europe and North America. However, this in itself is not the White Helmet’s final performance.

The northern province of Idlib still remains occupied by foreign-backed militants. What terrorists have not slipped over the borders and into Israel and Jordan are consolidating their positions in northern Syria. Some say it is not a matter of if, but when Syrian forces turn their attention north and begin seizing back Idlib.

When they do, the White Helmets will be there, side-by-side Al Qaeda’s numerous affiliates, once again taking on the role of war propagandists – fabricating evidence and staging provocations to justify whatever their foreign sponsors’ desired role is amid the unfolding conflict.

And even when the last White Helmet flees Syria or melts back into the Syrian population leaving real heroes to restore order, rescue the vulnerable, and rebuild the nation – the cynical gimmick the White Helmets represent will be repeated in other proxy conflicts, in other nations targeted by Western hybrid warfare.

Nations should consider themselves warned – citing Syria as an example – that the West has used this tactic, and will use it again. The lessons Syria learned the hard way regarding all aspects of Western hybrid warfare must be shared and learned from to prevent the tragedy and misery the White Helmets claimed to rescue people from, but in fact sowed among the Syrian people.

Tony Cartalucci is Bangkok-based geopolitical researcher and writer, especially for the online magazine “New Eastern Outlook” where this article was originally published. He is a frequent contributor to Global Research.

All images in this article are from the author.

Alaska has received some strange weather lately. It’s been weird for the last couple decades or so, but there seems to have been some sort of correlative spike in these enigmatic weather patterns to two possible scenarios that have unfolded within the last couple decades in Alaska: global climate change or the insidious grand-daddy of Read More…

In this video, Aaron Dykes covers a shocking news clip from 1971 about vaccines. Today the corporate media doesn’t dare report anything like this. Yet, even back then, it was laced with propaganda.

Has The US And Its Allies Used Covert Airdrops, Drones To Supply The Islamic State?

When asking these questions, they must first be understood in the context that: (A.) According to WikiLeaks, within the e-mails of former US Secretary of State Hillary Clinton it was acknowledged that the governments of two of America’s closest allies in the Middle East, Saudi Arabia and Qatar, were providing material support to the Islamic State Read More…