Time and time again I’ve heard people complain about their iPhones or Mac laptops getting slower and slower, forcing them to purchase entirely new products. However, many people who have experienced this technological lull also noticed that the deterioration of their Apple products coincided with the launch of Apple’s new products.

To be honest, if Apple was doing this, it would be a pretty smart business move. They launch new products periodically, and all of them are really just slightly fancier versions of their older models. People don’t often need these products, they simply want them. They only become a “need” when their older models break or malfunction.

Personally, I love these products! But every 2-4 years, my iPhones all of a sudden malfunction and my MacBook will randomly get slower. The question is: Are these products simply malfunctioning thanks to “old age” and natural wear and tear, or are they breaking because Apple purposefully slows down its older models prior to releasing new ones?

A study performed by student Laura Trucco at Harvard University aimed at determining whether or not there was any truth behind the claims that Apple sabotages its own products prior to releasing new models.

The study reviewed worldwide searches for “iPhone slow” and discovered that this particular phrase was searched for significantly more whenever a new iPhone was about to be launched. Trucco then compared those results to the findings of other searches for Apple’s competitors’ phones, such as “Samsung Galaxy slow,” and found that the phrase was not searched for more around the time that a new Samsung phone model was released.

As you can see, the number of Google searches for “iPhone slow” spiked every time a new phone model was launched and made available to the public: 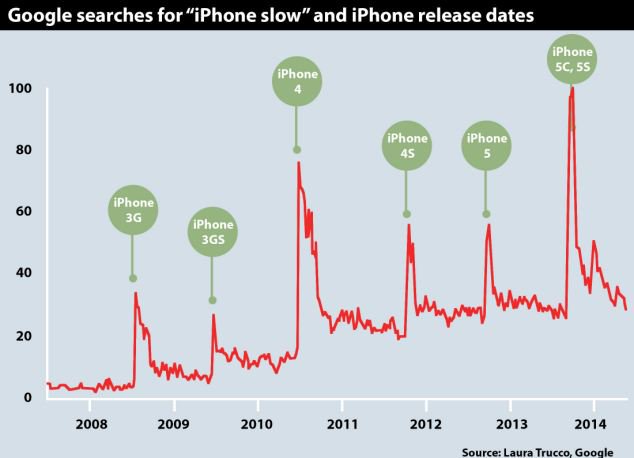 You can then review the number of searches for “Samsung Galaxy slow” in comparison to the release dates for their new phone models: 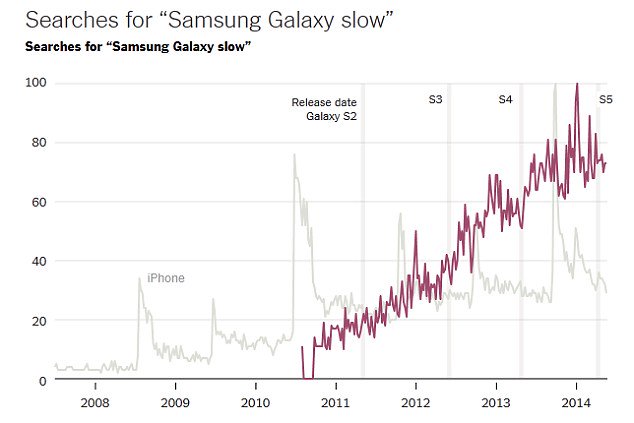 This isn’t the first time anyone has publicly discussed these claims, suggesting that Apple does in fact sabotage its old products prior to releasing new ones. For example, Catherine Rampell of the New York Times suggested that Apple could design its new operating systems so that they only properly work on their newer devices.

Rampell even stated that her own iPhone 4 got slower when she downloaded the new operating system at the time, and that the only solution to fix it would be to purchase the newer version of the iPhone.

Rampell explained, “When major innovations remain out of reach, and degrading durability threatens to tick off loyal customers, companies like Apple can still take a cue from the fashion industry.”

Apple doesn’t necessarily need to make its products more advanced in regard to technology in the same way that many other tech companies need to. Apple can simply make slight technological advancements in addition to more appealing aesthetic changes and still convince customers that they need to buy their newest products, even if they operate extremely similarly.

Even if their older models are still functioning, they continue to perpetuate this consumer mindset that “we need to follow the latest trends,” similar to the fashion industry. It’s largely about aesthetics. 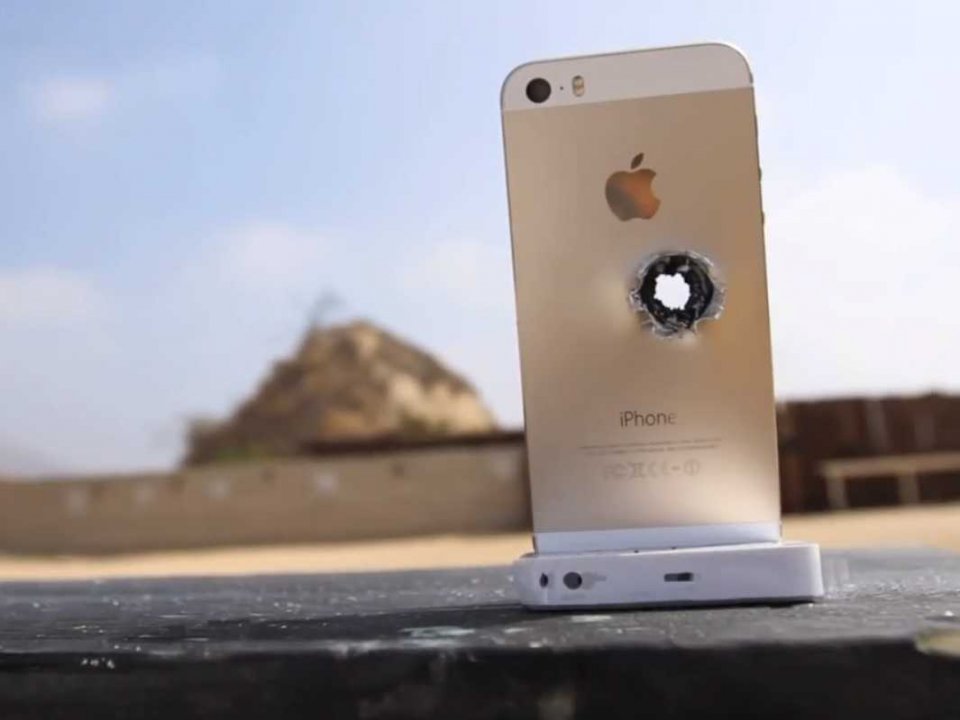 It’s important to keep in mind that, although Apple could be purposefully slowing down older models in order to convince you to purchase their newer ones, this is not a hard fact. Smartphones and laptops naturally slow down over time, especially when you’re updating your software and apps constantly as well as filling them steadily with more digital debris.

So, although your phones may seem slower after updating them, this may not actually be proof of this “conspiracy theory.” Plus, if Apple is actually sabotaging their own products, is there anything really “wrong” with that? They’re a business, and ultimately their number one goal is to profit. By selling you more phones, they will obviously make more money, which is their end goal anyways. Sure, it may seem unethical to the consumer, but it’s not necessarily “wrong.”

Either way, there’s no way of knowing 100% whether or not Apple purposefully slows down its products prior to launching its new ones. However, if you do notice that your phone or laptop is slow and you need a new one, do not just throw them out. Either give them or sell them to someone who could actually use it, return it to Apple so they can reuse it for parts, or get it fixed so you don’t need to purchase an entirely new product.

These electronics are by no means “good for the environment,” there are parts that need to be mined for and they require a lot of energy to produce. When you can prevent having to purchase something new or save something from ending up in a landfill, do it.

Editor’s Note: While I can appreciate the author’s optimism, “planned obsolescence” is very real, and in many cases, verified. And there is indeed nothing legally wrong with sabotaging one’s own products in order to incentivize consumers to purchase new ones, yet this is next-level sinister in terms of good business practice. The important take away here is that your consumer power is a very important tool today that is given very little attention in terms of dictating the country’s direction, and for obvious reason. In fact, it is the only power left to the individual that actually garners a response from our leaders in their ivory towers, if not grudgingly and reluctantly, but a real-world response nonetheless. So as we enter into a time when such practices are becoming public knowledge, opt for a product or company that does not violate your privacy while simultaneously systematically weakening your now thousand dollar product, so as to be effectively downgraded and hindered just in time for their next product installment. Opt for a company that does not put the government’s needs and that of its shareholders, over the success of its very product, and those who mindless still choose to buy it.

The Destructiveness of America’s Alliances

Alliances between nations are military. Without being military, they would be nothing at all. Trade agreements don’t require alliances. World War I wouldn’t have occurred if there had not been alliances — it was built upon alliances. It was not built on trade agreements. It wasn’t even built on trading-blocs.  In fact, as the WTO (World Trade Read More…

Tariffs, counter-tariffs and headlines about trade wars are flowing like wine as the long-anticipated Trump campaign against China is finally shaping up. Given that futures are tumbling, the US trade deficit has just hit a decade low, and, oh yeah, we haven’t seen market volatility like this since the crash of ’87 you might think we have enough ominous financial storm clouds to Read More…

“Former CIA director John Brennan has become the latest member of the NBC News and MSNBC family, officially signing with the network as a contributor,” chirps a recent article by The Wrap, as though that’s a perfectly normal thing to have to write and not a ghastly symptom of an Orwellian dystopia. NBC reports that the former head of Read More…