The U.S. military budget dwarfs every other country on the planet combined.

Do you know how much the Pentagon spent between 1998 and 2015 that is “unaccounted for”?

Where did it go?

No one knows…it’s “unaccounted for”.

The role of government must SERIOUSLY be reconsidered in America.

Without being technically at war with anyone in particular, the U.S. is dropping a bomb somewhere in the world every 12 minutes, around the clock.

The U.S. has 1,000 military bases scattered across the planet.

Congress, not only doesn’t declare war, as they’re required to by the U.S. Constitution, but they’re surprised to find out that American troops are peppered throughout Africa too.

The role of government must SERIOUSLY be reconsidered in America.

These principles have long been gone.

It’s time to revive them.

Just in case you were unclear on the details of the missing $21 trillion… here is Lee Camp, via TruthDig.com…

The Pentagon’s own numbers show that it can’t account for $21 trillion. Yes, I mean trillion with a “T.” And this could change everything.

But I’ll get back to that in a moment.

There are certain things the human mind is not meant to do. Our complex brains cannot view the world in infrared, cannot spell words backward during orgasm and cannot really grasp numbers over a few thousand. A few thousand, we can feel and conceptualize. We’ve all been in stadiums with several thousand people. We have an idea of what that looks like (and how sticky the floor gets).

But when we get into the millions, we lose it. It becomes a fog of nonsense. Visualizing it feels like trying to hug a memory. We may know what $1 million can buy (and we may want that thing), but you probably don’t know how tall a stack of a million $1 bills is. You probably don’t know how long it takes a minimum-wage employee to make $1 million.

That’s why trying to understand—truly understand—that the Pentagon spent 21 trillion unaccounted-for dollars between 1998 and 2015 washes over us like your mother telling you that your third cousin you met twice is getting divorced. It seems vaguely upsetting, but you forget about it 15 seconds later because … what else is there to do?

But let’s get back to the beginning. A couple of years ago, Mark Skidmore, an economics professor, heard Catherine Austin Fitts, former assistant secretary in the Department of Housing and Urban Development, say that the Department of Defense Office of Inspector General had found $6.5 trillion worth of unaccounted-for spending in 2015. Skidmore, being an economics professor, thought something like, “She means $6.5 billion. Not trillion. Because trillion would mean the Pentagon couldn’t account for more money than the gross domestic product of the whole United Kingdom. But still, $6.5 billion of unaccounted-for money is a crazy amount.”

So he went and looked at the inspector general’s report, and he found something interesting: It was trillion! It was fucking $6.5 trillion in 2015 of unaccounted-for spending! And I’m sorry for the cursing, but the word “trillion” is legally obligated to be prefaced with “fucking.” It is indeed way more than the U.K.’s GDP.

Skidmore did a little more digging. As Forbes reported in December 2017, “[He] and Catherine Austin Fitts … conducted a search of government websites and found similar reports dating back to 1998. While the documents are incomplete, original government sources indicate $21 trillion in unsupported adjustments have been reported for the Department of Defense and the Department of Housing and Urban Development for the years 1998-2015.”

Let’s stop and take a second to conceive how much $21 trillion is (which you can’t because our brains short-circuit, but we’ll try anyway).

1. The amount of money supposedly in the stock market is $30 trillion.

4. Imagine you make $40,000 a year. How long would it take you to make $1 trillion? Well, don’t sign up for this task, because it would take you 25 million years (which sounds like a long time, but I hear that the last 10 million really fly by because you already know your way around the office, where the coffee machine is, etc.).

The human brain is not meant to think about a trillion dollars.

And it’s definitely not meant to think about the $21 trillion our Department of Defense can’t account for. These numbers sound bananas. They sound like something Alex Jones found tattooed on his backside by extraterrestrials.

But the 21 trillion number comes from the Department of Defense Office of Inspector General—the OIG. Although, as Forbes pointed out, “after Mark Skidmore began inquiring about OIG-reported unsubstantiated adjustments, the OIG’s webpage, which documented, albeit in a highly incomplete manner, these unsupported “accounting adjustments,” was mysteriously taken down.”

Here’s something else important from that Forbes article—which is one of the only mainstream media articles you can find on the largest theft in American history:

Given that the entire Army budget in fiscal year 2015 was $120 billion, unsupported adjustments were 54 times the level of spending authorized by Congress.

That’s right. The expenses with no explanation were 54 times the actual budget allotted by Congress. Well, it’s good to see Congress is doing 1/54th of its job of overseeing military spending (that’s actually more than I thought Congress was doing). This would seem to mean that 98 percent of every dollar spent by the Army in 2015 was unconstitutional.

So, pray tell, what did the OIG say caused all this unaccounted-for spending that makes Jeff Bezos’ net worth look like that of a guy jingling a tin can on the street corner?

“[The July 2016 inspector general] report indicates that unsupported adjustments are the result of the Defense Department’s ‘failure to correct system deficiencies.’ ”

They blame trillions of dollars of mysterious spending on a “failure to correct system deficiencies”? That’s like me saying I had sex with 100,000 wild hairless aardvarks because I wasn’t looking where I was walking.

Say it slowly to yourself.

At the end of the day, there are no justifiable explanations for this amount of unaccounted-for, unconstitutional spending. Right now, the Pentagon is being audited for the first time ever, and it’s taking 2,400 auditors to do it. I’m not holding my breath that they’ll actually be allowed to get to the bottom of this.

But if the American people truly understood this number, it would change both the country and the world. It means that the dollar is sprinting down a path toward worthless. If the Pentagon is hiding spending that dwarfs the amount of tax dollars coming in to the federal government, then it’s clear the government is printing however much it wants and thinking there are no consequences. Once these trillions are considered, our fiat currency has even less meaning than it already does, and it’s only a matter of time before inflation runs wild.

It also means that any time our government says it “doesn’t have money” for a project, it’s laughable. It can clearly “create” as much as it wants for bombing and death. This would explain how Donald Trump’s military can drop well over 100 bombs a day that cost well north of $1 million each.

So why can’t our government also “create” endless money for health care, education, the homeless, veterans benefits and the elderly, to make all parking free and to pay the Rolling Stones to play stoop-front shows in my neighborhood? (I’m sure the Rolling Stones are expensive, but surely a trillion dollars could cover a couple of songs.)

Obviously, our government could do those things, but it chooses not to. Earlier this month, Louisiana sent eviction notices to 30,000 elderly people on Medicaid to kick them out of their nursing homes. Yes, a country that can vomit trillions of dollars down a black hole marked “Military” can’t find the money to take care of our poor elderly. It’s a repulsive joke.

Former Secretary of Defense Robert Gates spoke about how no one knows where the money is flying in the Pentagon. In a barely reported speech in 2011, he said, “My staff and I learned that it was nearly impossible to get accurate information and answers to questions such as, ‘How much money did you spend?’ and ‘How many people do you have?’ ” 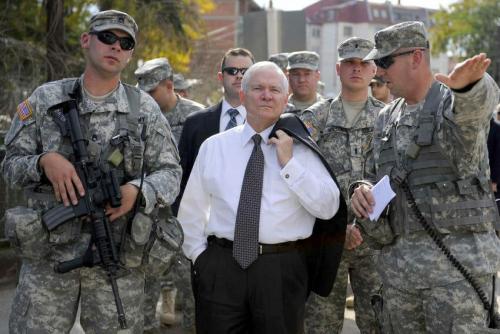 They can’t even find out how many people work for a specific department?

Note for anyone looking for a job: Just show up at the Pentagon and tell them you work there. It doesn’t seem like they’d have much luck proving you don’t.

For more on this story, check out David DeGraw’s excellent reporting at ChangeMaker.media, because the mainstream corporate media are mouthpieces for the weapons industry. They are friends with benefits of the military-industrial complex. I have seen basically nothing from the mainstream corporate media concerning this mysterious $21 trillion. I missed the time when CNN’s Wolf Blitzer said that the money we dump into war and death—either the accounted-for money or the secretive trillions—could end world hunger and poverty many times over. There’s no reason anybody needs to be starving or hungry or unsheltered on this planet, but our government seems hellbent on proving that it stands for nothing but profiting off death and misery. And our media desperately want to show they stand for nothing but propping up our morally bankrupt empire.

When the media aren’t actively promoting war, they’re filling the airwaves with shit, so the entire country can’t even hear itself think. Our whole mindscape is filled to the brim with nonsense and vacant celebrity idiocy. Then, while no one is looking, the largest theft humankind has ever seen is going on behind our backs—covered up under the guise of “national security.”

Sick of the same old, same old boring list of predictable, safe New Year’s predictions that are so vague they can’t possibly come true? (Weaponized narratives, indeed!) Yeah. So am I. So in the spirit of spicing things up for this post-holiday hangover season, let’s kick the year off with a bunch of outrageous predictions Read More…

Yet Another Senseless Mass Killing: Women And Children Among 25 Dead

This week, 25 people were slaughtered in yet another mass killing, and half of those deaths were women and children. But you won’t see these murders broadcast relentlessly on CNN, Fox News, MSNBC, nor discussed at length in social media threads. That’s because the U.S. military committed them in their crusade against the Islamic State’s “last enclave Read More…

‘The cover-up has allowed the industry to dig in for years of delay in cutting emissions—at the worst possible time’ Why has the Environmental Protection Agency (EPA) failed to take adequate action against dangerous methane emissions from the fracking industry? An environmental watchdog alleges that the answer may be a years-long, systematic cover-up of the true data Read More…

One Reply to “Ron Paul: Here’s 21 Trillion Reasons To Question The Role Of Government In America”