A Reuters headline early Monday sparked fears that Iran could be in control of the Strait of Hormuz, a key narrow waterway in the Persian Gulf through which about one-third of the global supply of oil passes.

Reuters reported in its story headline, Iran says it has full control of Gulf and U.S. navy does not belong there, while citing the head of the navy of Iran’s Revolutionary Guards (IRGC), General Alireza Tangsiri.

According to the report, “Tangsiri said Iran had full control of both the Gulf itself and the Strait of Hormuz that leads into it,” and further cited the general as saying, “Closing off the strait would be the most direct way of blocking shipping”.

“We can ensure the security of the Persian Gulf and there is no need for the presence of aliens like the U.S. and the countries whose home is not in here,” General Alireza Tangsiri said in the quote, which appeared in English translation via Iranian state media.

This sparked subsequent reporting that Iran had effectively blocked the strait; however, a FOX story noted, “A check of conditions on MaritimeTraffic.com on Monday showed that conditions appeared to be normal, with heavy maritime traffic through the strait.”

But the elite IRGC naval commander’s words are likely to raise tensions with Washington further, after prior remarks from both President Rouhani as well as other IRGC generals in early July suggesting that should White House sanctions seek to devastate Iranian oil exports, then no oil at all should pass through the area.

The Monday statement from General Tangsiri appears to be a reaffirmation Iran’s prior position of possessing sole “rights” over the strait. The United States for its part, has maintained a fleet in the Gulf seeking to protect oil shipping lanes even as Iran has ratcheted up military “show of force” exercises of late.

Previously in the summer, the spokesman for the US military’s Central Command, Captain Bill Urban, told the Associated Press that US sailors and its regional allies “stand ready to ensure the freedom of navigation and the free flow of commerce wherever international law allows”. 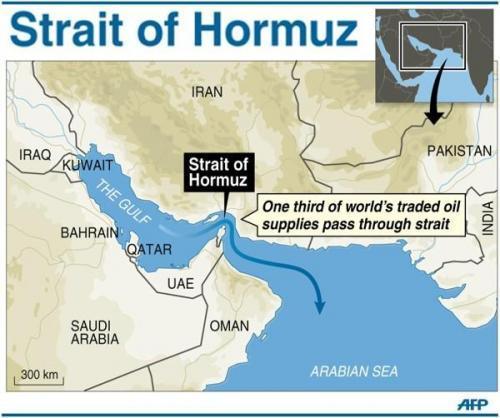 Washington has issued an ultimatum to countries dealing with Iran: halt all imports of Iranian oil from Nov. 4 or face punitive US economic measures with no exemptions. Rouhani has called these threats “crime and aggression” and an act of “self-harm” as the unwavering stance is “against U.S. national interests and the interests of other countries.”

The Strait of Hormuz at its narrowest is about 31 miles wide and approximately 30% of the world’s seaborne oil passes through it, and the IRGC has in the past threatened the passageway by conducting war games, such as during a period of heightened tensions with the West over the straight in 2011 and 2012, and most recently in early August.

US-Saudi Relationship Unraveling At The Seams

Making headlines in both mainstream media and alternative media, has been the sudden rise in political tensions between Saudi Arabia and the United States. Having a vastly interconnected relationship on a variety of fronts, this apparent rift in relations sparks a number of questions regarding what’s really happening behind the scenes. While there may not Read More…

The United States Is The Only Remaining Colonial Power

The United States government has never allowed independent governments in Latin America. Every time people elect a government that represents them instead of US economic interests, Washington overthrows the elected government. Marine General Smedley Butler told us this as have many others. There is no doubt about it. Currently Washington is trying to overthrow the governments of Read More…

(AntiWar) Pass-Fail results of Pentagon inspections of America’s nuclear weapons facilities have historically been a matter of public record, and one which has proven a repeated embarrassment, as those inspections have repeatedly shown substandard performance and disastrously bad security. Officials seem to have figured a way around that, as they have begun withholding inspection results, including Read More…