A restaurant owner who called out St. Louis police for tear-gassing his customers is now receiving death threats from “Blue Lives Matter” supporters.

(TFTP) A business owner in St. Louis was quick to condemn police for tear-gassing his customers and indiscriminately firing rubber bullets into his restaurant, which endangered his patrons and ultimately forced him to close his business, costing him valuable revenue. In response, the owner has received both condemnations from the police union, and even death threats from supporters who “back the blue.”

Chris Sommers of Pi Pizzeria is not backing down, and according to a statement published by Riverfront Times, he is adamant about holding the St. Louis Metro Police Department accountable for its officers’ actions—no matter what smear campaigns or death threats they throw at him. 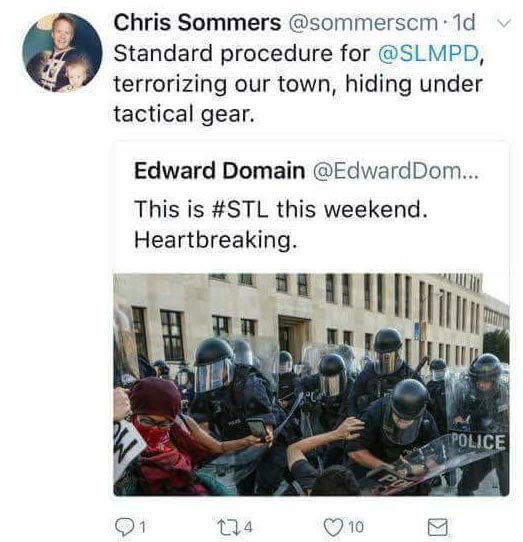 “On Friday night, at approximately 11:15pm, the SLMPD shot at me and gassed me,” Sommers wrote. “They did this, ostensibly, because I was screaming at them from across an empty street to stop terrorizing my dinner guests and team who were dining peacefully on a corner devoid of protestors or agitators.”

Sommers noted that he was first alerted to the protests while monitoring Twitter. When he saw reports of protests after it was announced that Police Officer Jason Stockley was acquitted of the killing of Anthony Smith—despite evidence that Stockley initiated a dangerous police chase and then planted a gun in Smith’s car—Sommers said he attempted to help calm the tension.

“I immediately jumped in my car and called our manager, asking him to get waters ready to hand out to all police and protestors as they walked by, in an attempt to calm nerves and prevent damage to my building,” he wrote, noting that the protests were peaceful and they lasted for about an hour.

After Sommers determined that the scene had calmed down, he said he left the restaurant and started his drive home, where he encountered a wall of militarized police officers “marching by themselves with gas masks, guns and shields,” despite the fact that there were no protesters in sight.

“When they reached the corner, at least one of them began shooting indiscriminately, at absolutely no one,” Sommers wrote. “Some of the shots (pepper pellets, I later learned) were directed towards the air, so it appears they were just trying to intimidate. But whom? The only people around were guests and neighbors and a few people with cameras. I had previously pulled out my phone and got all of this on tape.”

While the video of this scene does not appear to have been released publicly, its existence holds substantial weight. Sommers claimed he is now working with the American Civil Liberties Union, and plans to testify before a federal judge.

“I used lots of expletives at these little men and women hiding behind shields with guns, terrorizing my guests who pay their salaries. The ACLU told me their aggression against my language makes their crime even more egregious. After they threw a tear gas canister at me (again, on video), a guy next to me picked it up and threw it back at them, either to get it away from him and others at Pi, or because he felt violated and wanted to return the poison. They certainly didn’t like that, and finally crossed the street, rushing at me as I ran into my restaurant and barely got the door closed before they could break in. Yes, I had to lock down my restaurant for the first time from the St. Louis Metropolitan Police Department. I then had to close the restaurant, buy dinner for remaining guests and ensure that my team, who were now all terrified from the gas and rush by the police, had a safe ride home.”

“I repeat, we only closed our restaurant this weekend out of fear of police, not protestors or the shitheads vandalizing,” Sommers emphasized, noting that as soon as he began sharing his experience on social media and “calling out the insane, illegal behavior by the police,” he became “public enemy No. 1 to every ‘Blue Lives Matter’ fanboy.”

Sure enough, the Blue Lives Matter website criticized Sommers in an article claiming he was “supporting the rioters even as they tried to set his restaurant’s plants on fire.” However, it failed to mention that Sommers and his staff offered water to everyone—protesters and police—and the report of someone trying to set his plants on fire was based on the actions of one man, not an entire group of protesters.

“Let’s get the word out that if you bash the police, you won’t be getting our business,” Blue Lives Matter concluded.

Sommers claimed the union representing the St. Louis Metro Police Department also posted his and his employees’ phone numbers on its Facebook page, and as a result, they have been threatened and harassed.

“It was my team and I who kept our business safe that night, though only barely from the police department itself,” Sommers wrote. “These people are now calling for our windows to be broken, and based on their words, I don’t doubt they will do it themselves.”

Sommers noted that he has had a history of supporting police through his business, including letting officers eat for free of for 50 percent off every time they dine in uniform, and he has also donated to their non-profits and events anytime he is asked.

“The Blue Lives Matter (Only) people who are threatening me and my business use phrases like “Black Lives Don’t Matter” in their messages. They all have Trump and “Make America Great Again” tags in their profiles. Oh, and they generally seem to love Jesus. It just doesn’t compute. But then again, it all makes sense for these authoritarian types. Despite the SLMPD catching none of the criminals who have assaulted and robbed me, my businesses and employees, or home, I have continued to support them. They have NOT protected me and often never showed up when I’ve called them, but I’ve continue to serve them, with free meals and cash. No longer. And I’ll lose less money on every meal I don’t give away to them.”

Sommers also claimed that the “systematic racism and corruption in our SLMPD and beyond is well-known and documented.” He said that when one of his coworkers was dining in St. Louis during the protests, “six cops came in bragging about killing Smith, saying ‘so what, we killed him, St. Louis needs to move on.’ No one at that table questioned that officer.”

As he deals with a barrage death threats, Sommers is responding by asking the public to support him by attempting to combat some of the negative reviews hundreds of “Blue Lives Matter” supporters have left on Yelp, Google and Facebook, attacking his business.

However, just as police officers were marching through the streets of St. Louis, chanting “Whose streets? Our streets!” it appears that there are far too many people who believe them.

If an individual sincerely believes that when a business owner defends his restaurant by calling out to police to stop indiscriminately targeting his customers, he is automatically someone who hates police, and should receive death threats, that individual should seriously reconsider his or her line of thinking. If one claims to “support” police officers, the best thing they can do is to hold those officers accountable for these actions, instead of following them blindly with no oversight.

Thursday evening, Sommers summarized this week of hell brought directly to him by those sworn to protect.

In a 4-3 decision, the Wisconsin Supreme Court just killed the rights of citizens outlined in the Fourth Amendment by stating that police officers may enter a home, or parts of the home, without a warrant and can seize evidence to use in the arrest and prosecution of citizens. The Fourth Amendment states that unreasonable Read More…

92% Of CNN’s Programming Dedicated To Trump-Bashing

(RT) A team of analysts from Newsbusters.org studied a 20-hour period of programming on CNN (from 4am until 11pm on Friday, May 12, 2017). They discovered that 92% of the news network’s entire airtime was filled with discussion of the Trump administration, the vast majority of which was cast in a negative light.

Big Pharma And The Creation Of A Painkiller Addiction Epidemic

Many people would naturally associate drug addiction with illegal street drugs. However, there’s a different type of drug addiction. Growing exponentially and out of control Big Pharma has created an opioid painkiller addiction epidemic that’s causing more suffering and death than illegal street drugs. In the USA the opioid painkiller prescription rate has increased by Read More…