Saudi Arabia has spent more than three years bombing Yemen into oblivion and creating a humanitarian crisis. But is what’s happening in Yemen genocide?

What Qualifies as Genocide?

There isn’t a concrete definition of the word “genocide” and, unfortunately, the word gets thrown around a lot when it doesn’t actually apply.

Google defines the term very generally as “the deliberate killing of a large group of people, especially those of a particular ethnic group or nation.”

Wow, with that definition, what’s happening in Yemen is certainly genocide — not so fast.

The United Nations’ definition, however, contains precise factors for determining whether or not something qualifies as genocide:

1) A mental element: the “intent to destroy, in whole or in part, a national, ethnical, racial or religious group, as such”; and

So, is what’s happening in Yemen genocide?

Is the Saudi War Against Yemen Genocide?

It isn’t easy to keep track of the numerous war crimes in Yemen. Saudi royals, diplomats, and other elites own shares of many mainstream media outlets which has a significant impact on coverage — both in terms of quantity and quality.

If you read an article about the war in Yemen from the Washington Post, Reuters, CNN, or Fox, chances are that the information came from Saudi media, diplomats, or military members.

To top it off, Riyadh has a history of bribing the UN to stop independent inquiries, keep itself off child maiming blacklists, and avoid charges in the ICC.

Here is a detailed look at the U.S.-backed Saudi war against this tiny impoverished country to determine if what’s happening in Yemen is genocide.

Killing Civilians for the Crime of Simply Being Yemeni

It seems their goal is to create as many civilian casualties as possible.

Over the past three-plus years, U.S.-backed Saudi airstrikes have produced over 35,000 civilian casualties: over 13,000 killed and over 21,000 injured — many of which are women and children. This figure, recorded by Yemeni monitoring group Legal Center for Rights and Development, only includes stats from the 1,000-day mark of the war in December of 2017. Countless others have lost their lives since then.

It’s difficult to summarize some of the most notable attacks due to the sheer number, but here are a few.

Those are just a handful of the worst attacks I could come up with off the top of my head but there are several more.

Not to mention, the Saudi coalition has also made a habit of performing “double tap” airstrikes. After the first set of airstrikes, the warplanes return to target ambulance crews, rescuers, and media personnel entering the scene.

Although we can’t read minds and the Saudi-coalition would never admit this, it’s very clear that their goal isn’t to kill resistance fighters: Riyadh’s goal is to kill Yemenis simply for being Yemeni.

This would indicate that what’s happening in Yemen is genocide.

Famine and Disease as a Weapon

Famine and disease isn’t just an unintentional byproduct of the blockade — it’s a weapon of war.

Saudi Arabia imposed its blockade over Yemen shortly after revolutionary forces took control of the country’s capital, Sana’a, in 2015. This land, air, and sea blockade severely restricts imports, exports, and the flow of movement.

Yemen imports nearly 80 percent of food so the blockade has devastated the country: over two-thirds of the population face famine or food insecurity. Riyadh and Abu Dhabi are the gatekeepers of anything entering or leaving the country — including people.

This embargo combined with a shortage of medical and sanitation equipment eventually triggered a cholera epidemic. From April 2017 until the end of the year, over 1 million people became infected with this very preventable, very treatable, and very fatal disease. Thousands died because they were not able to receive medical care in time. This created the largest cholera outbreak in the world.The blockade also limits government salaries for public employees. In Yemen, doctors, nurses, sanitation workers, teachers, engineers, and several other vital positions qualify as public employees. Many have sought work from private sector jobs due to the embargo.

Although the outbreak has slowed down, Yemen now prepares to enter its rainy seasons so local health officials expect the epidemic to pick up again. To top it off, hundreds reported diphtheria symptoms or diagnoses: another preventable yet fatal illness. 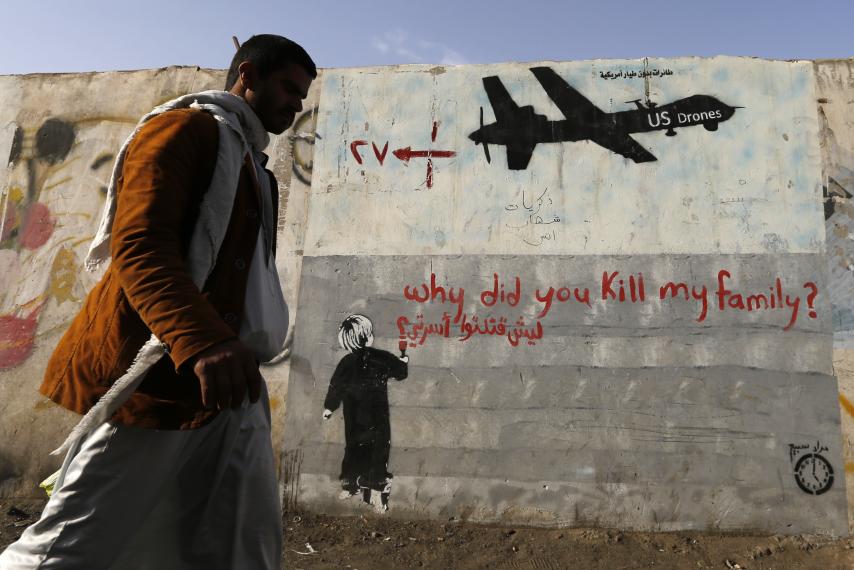 The airstrike targets and blockade provide evidence that the Saudi-led coalition intends to cause Yemeni civilians psychological harm.

Sometimes drones and warplanes will simply hover over civilian neighborhoods without dropping bombs — just to create a heightened state of fear.

The blockade and embargo serve as additional tools for manipulating the mental state of Yemenis through disease, famine, and despair.

Many people may not realize that the Saudi coalition has used this war to destroy most of Yemen’s culture and ancient sites.

“After 3 years of assessing the damage, I believe the bombing is being done with a purpose since many of these sites are not suitable or useful for military use,” said Mohanad Ahmad al-Sayani, chair of Yemen’s General Organization of Antiquities and Museums in Sana’a.

The Saudi royal family adheres to an intolerant ideology known as Wahhabism. They force this ideology onto their civilian population as well and punish anyone (sometimes with death) who does not follow this specific sect of Islam. Jews and Christians are not allowed to have places of worship inside the kingdom while Jews can’t even enter the country.

Yemen, on the other hand, is historically pluralist: multiple sects live side by side in peace. Although Saudi Arabia uses tactics to create sectarianism in Yemen, the populace remains more unified than ever.

It’s important to point this religious aspect known as “takfirism” out before mentioning that Saudi warplanes frequently target mosques and cemeteries. They punish all non-Wahhabis at home, why wouldn’t they punish abroad?

Besides mosques, Saudi airstrikes have also destroyed many of Yemen’s prized archaeological sites. Yemen is one of the oldest centers of civilization: people have inhabited cities like Sana’a for thousands of years. As a result, Yemen is home to several incredible ancient sites.

In 2015, Saudi jets damaged the historic Marib Dam — the construction of which dates back to the eighth century BCE. Its walls contained scripture detailing ancient laws and customs and this site as a whole is specifically mentioned in the Quran — it’s that old.

Saudi warplanes also destroyed the Regional Museum of Dhamar along with thousands of ancient artifacts from the 280 CE Himyarite Kingdom inside. Additional archaeological targets include Aden’s medieval Sira Fortress along with over 60 other key historical sites.

“The strange thing is that the rate of fetal abnormalities is growing and doctors cannot explain the causes, meaning that the phenomenon could be attributed to war and ordinances, given the fact that a great proportion of women with deformed fetuses hailed from bombarded areas in the provinces of Sa’adah, Sana’a, Ta’izz, and Hudaydah,” Yemeni Doctor Abdulkarim al-Najjar said.

The blockade also makes adequate medical care difficult to come by and pregnant women are the most vulnerable. This certainly can’t be a coincidence. Disease and famine have dire effects on developing fetuses.

Rape as a Weapon of War

In one notable instance, a Sudanese mercenary in Hodeidah province raped a Yemeni woman. When she told the local authorities, Emirati troops apprehended her and forced her to sign a document promising she would deny the event ever happened.

Saudi Arabia’s current — and historical — oppression of Yemen has devastating effects on the well-being of children in several ways.

Human trafficking is an epidemic in Yemen. In many cases, young boys are the main victims. These young boys are often transported across the northern border into Saudi Arabia where they work as unskilled labor or whatever else the abductors want.

Last year, Saudi mercenaries kidnapped a young girl named Buthaina. A week or two prior to the kidnapping, Riyadh’s warplanes destroyed her home using U.S. bombs — Buthaina was the only survivor. According to her uncle, Saudi forces kidnapped them both in Aden and forced them to relocate to Riyadh. From there, Saudi Arabia used Buthaina to start a propaganda war against Yemen’s resistance. They claimed the bomb that destroyed Buthaina’s home came from Ansarullah (aka. Houthi) fighters as opposed to Saudi warplanes despite international organizations stating otherwise.

It’s also common for the Saudi coalition to kidnap families and children while they attempt to reach airports to flee the country for medical care or any other reason.

By Saudi Arabia’s Own Justification, Their War in Yemen is Genocide

Riyadh’s own justification for waging war proves that what’s happening in Yemen is genocide.

Saudi Arabia portrays the conflict as a war against rebels to reinstate the so-called legitimate government. You can read more about this in my detailed report of the war’s origins as well as here and here.

People consuming news about Yemen from mainstream sources are bombarded with matter-of-fact accusations concerning Iran’s involvement. These outlets directly name Yemen’s resistance forces — the Ansarullah (aka. “Houthi”) movement — as “Iranian-backed” militias. This couldn’t be further from the truth and again, you can read more about that in my detailed report.

The Saudi accusation of Iran’s involvement in Yemen goes much deeper than what Western readers may realize. Rather than just accusing Ansarullah of receiving Iranian military support, Saudi military officials and clerics call members of Ansarullah “crypto-Persians.”

Ansarullah (aka. “the Houthis”) is a broad political movement. Contrary to what the mainstream media says with terms such as “Shiite militias,” this movement contains several Islamic sects and political groups united under one banner of resistance to foreign interference.

However, if we use the official Saudi narrative about crypto-Persians, then what’s happening in Yemen is genocide against Persians.

What’s Happening in Yemen is Genocide

No, this is a Saudi war against Yemenis.

For over the past three years, Saudi Arabia and their coalition have deliberately killed, starved, raped, inflicted physical and psychological torture, and forced disease upon Yemeni civilians.

Why? Simply for being Yemeni.

Riyadh’s U.S.-backed airstrikes and blockade do not discriminate against religious sects or political leanings.

What’s happening in Yemen is genocide.

In response to last week’s shooting at a Florida high school, the state’s governor recently released his plans to make schools safer. Many of his proposals will indisputably serve to further turn schools into prisons, a trend that has been on the rise for years. According to the Tampa Bay Times, Governor Rick Scott’s proposals include: “— $450 Read More…

Deutsche Bank Admits To Rigging Both Gold and Silver Markets; Agrees To Expose Others

As many investors have been alluding too for some time, price-fixing seems to be rampant all over the precious metals markets, particularly in Gold and Silver. Just in the past two days, this “crazy” speculation has finally been confirmed, as Deutsche Bank has admitted to fixing the price of both silver and gold on the Read More…

As Millions Pulled From WHO, Trump Admin Commits Billions To Gates-Founded Vaccine Alliance

Welcome to The Daily Wrap Up, a concise show dedicated to bringing you the most relevant independent news, as we see it, from the last 24 hours (7/8/20). As always, take the information discussed in the video below and research it for yourself, and come to your own conclusions. Anyone telling you what the truth Read More…