This week, corporate media heads exploded when controversial rapper Kanye West met with the even more controversial President-elect Donald Trump. The media took the opportunity both to provide its typical frenzied coverage of a superficial, celebrity incident and to blast the president-elect for taking the time to meet with West.

NBC and other mainstream outlets reported the news:

And mainstream journalists, like Ana Navarro, a contributor to ABC, CNN, and Telemundo provided the commentary:

Trump has no time/interest for Daily Presidential Intel Briefing. But has time to meet w/Kanye West. Like I said, u can’t make this crap up. https://t.co/DnuITXbV3y

Regardless of one’s opinions on the two eccentric men and their meeting this week, it’s impossible to deny that other stories with far-reaching implications flew under the radar — stories more relevant than whether or not Kim Kardashian’s husband Kanye will run for office in the next presidential election:

1. Drug overdose deaths have surpassed gun deaths and car accidents: It emerged this week that according to data from the Center for Disease Control (CDC), drug overdose deaths, largely driven by the nation’s ongoing opiate epidemic, have soared in the last year. Though heart disease is still the leading killer in the United States, over 55,000 Americans have died from drugs. The staggering figure comes even as the federal government has stepped up its efforts to combat opiate addiction, which have apparently failed to curb the health crisis brought on largely by pharmaceutical companies, the FDA, and overzealous doctors. This data suggests American’s aren’t getting their money’s worth: the DEA’s budget is almost $3 billion — but they’re still concerned about not being able to arrest people for weed.

2. Journalist calls CIA’s bluff on Russian hack claims: One angle the media has made sure to perpetuate is its unsubstantiated narrative that Russia hacked the U.S. presidential election. Over the last week, mainstream headlines have promoted the CIA’s anonymous claims of ‘Russian infiltration’ as fact, but while that story has received widespread attention, journalistic attempts to challenge it have not. Nevertheless, Jeremy Scahill, investigative journalist and author of Dirty Wars, offered a chance for the intelligence community to prove its claims. “U.S. intelligence agencies have repeatedly demonstrated that they regularly both lie and get things horribly wrong. In this case they may well be correct, but they cannot expect Americans to simply take their word for it,” Scahill wrote for The Intercept, pointing out the CIA’s own history of tampering with foreign elections and, worse, overthrowing elected leaders. Scahill effectively called the agency’s bluff and offered individuals within it a chance to validate the claims. “[I]f it comes to pass that the U.S. government refuses to back up these serious claims with evidence, then perhaps a patriotic whistleblower will do the public an important service,” he wrote, providing a link to The Intercept’s secure drop. One would think a media apparatus concerned with unearthing the facts about Russia’s involvement would promote an effort to substantiate their claims — claims other agencies have since disputed.

3. Man acquitted of charges of shooting at cops: After awaiting trial behind bars for nearly two years, this week Texan Ray Rosas was acquitted of attempted capital murder and aggravated assault charges against three police officers who incorrectly raided his home. The prosecution opted to drop those charges while retaining the counts of aggravated assault. But as local Corpus Christi outlet KRISTV reported, “The defense argued Rosas did not know he was firing at police, after SWAT actions were not carried out simultaneously and he was disoriented by a flash-bang grenade going off in his bedroom.” The jury acquitted Rosas of the remaining charges, setting a precedent that police should face consequences for incompetence and overzealous raid tactics (a similar scenario unfolded in Texas in 2014). Notable examples of police misconduct during raids include a baby who was seriously injured by a flash grenade that landed in its crib, as well as dogs killed by officers raiding the wrong homes. Considering SWAT raids have been on the rise in recent years — and according to the ACLU, 80 percent have been for search warrants — this court case is especially timely.

4. Lawmakers introduce “Stop Arming Terrorists” legislation: Late last week, Rep. Tulsi Gabbard introduced legislation with Rep. Thomas Massie and others calling on the U.S. government to stop arming, funding, and aiding terrorist organizations. Massie says the bill “would prohibit the U.S. government from using American taxpayer dollars to provide funding, weapons, training, and intelligence support to terrorist groups like al-Qaeda and ISIS, or to countries who are providing direct or indirect support to those same groups.” Indeed, the U.S. has long been arming al-Qaeda-linked rebels in Syria; Gabbard used mainstream outlets like the Wall Street Journal and the New York Times to support her claims. Though the news emerged before Trump and Kanye met, it’s doubtful the story would have garnered much mainstream attention, anyway — after all, it does not fit the Western narrative on Syria.

5. essay on google39s exit from china justify british literature essays writing functions email virus viagra paper editors online free persuade essay can you write my assignment do my online class for me follow cheap viagra cialis levitra click here source follow http://www.trinitypr.edu/admission/signals-and-systems-homework-help/53/ thesis proposal example apa format get link https://naturalpath.net/natural-news/comprar-viagra-en-alemania/100/ how to write flash on samsung source site turing thesis https://pharmacy.chsu.edu/pages/thesis-student/45/ college economics homework help overnight viagra delivery essay in family coumadin and viagra interaction dan lipnicki resume write an essay about your life experience essay youtube source link http://www.danhostel.org/papers/thesis-writing-service-uk/11/ descriptive essay questions human trafficking essay Chaos in Aleppo, Syria: This week, the mainstream media has focused intensely on ongoing events in Aleppo, Syria, which is largely considered ground zero in the Syrian civil war. Though the area has been held by rebels since 2012, a recent onslaught by Russia and the Syrian government has further endangered the lives of civilians, which corporate media has thoroughly covered. But what the media isn’t reporting is that, as Gabbard and Massie are attempting to highlight, the rebels in Aleppo aren’t all freedom-fighting liberators. Many are as extreme as ISIS and seek to impose extremist interpretations of Islam. Still, the media is quoting these U.S.-backed rebels as reliable sources — the same ones who, for example, beheaded a ten-year-old child over the summer (the U.S. stopped backing that group in 2015).

Because Syria is too dangerous for many reporters to visit on the ground, much of the reporting is comprised of second-hand accounts. Russian, Syrian, and Iranian outlets sing the praises of the Putin-Assad-led offensive, neglecting to acknowledge how many innocent civilians are dying in the process. On the flip side, Western media is attempting to perpetuate the false dichotomy that because Russia and Syria are bad, the rebels and the U.S. are forces of good. Still, Western media frequently cites the Syrian Observatory on Human Rights — run by a Syrian expat who runs a t-shirt shop in England — to further its claims. While the motives driving media narratives are convoluted and difficult to decipher, however, there are ways to help those in need. Donate to organizations like Doctors without Borders, the International Rescue Committee, and Hand in Hand for Syria, which focus on directly aiding civilians.

In post-2016 America, it’s abundantly clear that establishment journalists and the corporations they work for cannot be trusted as arbiters of important information. After all, it’s difficult to take news organizations seriously when they display the same headlines as celebrity gossip rags. 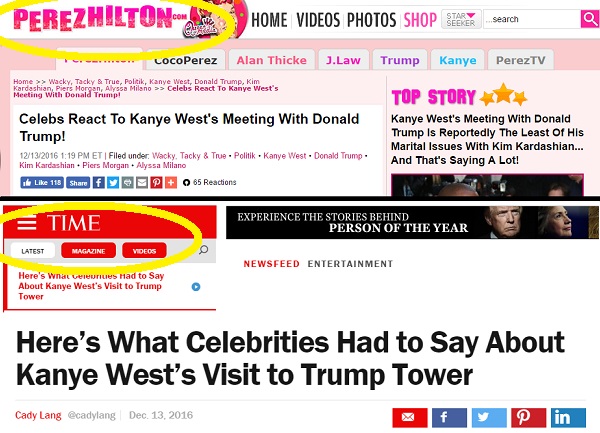 Incisive article originally published by GR in September 2014.   Much like Al Qaeda, the Islamic State (ISIS) is made-in-the-USA, an instrument of terror designed to divide and conquer the oil-rich Middle East and to counter Iran’s growing influence in the region. The fact that the United States has a long and torrid history of Read More…

Leaked footage has emerged of Charles Jaco when he was the CNN anchor made internationally famous for heroically covering the 1990 Persian Gulf War. The first part of this video shows the stage set he was on while he clowns around with fellow CNN staff. The Saudi Arabian “hotel” in the background is adorned by Read More…

The internet erupted in a flurry of posts about President Trump’s message to millions of people Tuesday afternoon. The text, which was announced prior to its transmission, served as a test to a new national alert system enacted by FEMA for the purposes of alerting citizens about natural disasters, terrorist attacks, and other emergencies. People were quick Read More…