I love Americans. I get friendly flak from some of my more jaded lefty readers whenever I say that, because having to deal with the flaws of one’s own countrymen is a very different experience than appreciating them from afar, but I do. I insist that Americans are generally good-hearted human beings, who just happen to also have a lot of ideas swimming around in their heads which benefit their government’s war machine and ruling oligarchs.

Indeed, America itself could be described as one gigantic ongoing psyop infecting 323 million otherwise healthy homo sapiens. Propaganda is one of the most under-appreciated and overlooked aspects of human experience; the way those in power use media to manipulate how people think and vote affects every significant issue in a truly massive way, yet it rarely even comes up in conversation. Americans are some of the most aggressively propagandized people on our planet, and their mass media machine keeps acting stranger and stranger.

Take today, for instance. The Pentagon has announced that it has approved the sale of 210 Javelin anti-tank missiles and 37 Javelin Command Launch Units to Ukraine, yet another step taken against Russia in what’s beginning to feel like almost daily escalations between the two nuclear superpowers. In response to these relentless increases in aggression from the US, Putin has announced the addition of new weapons of nuclear war to the Russian Federation’s arsenal, including nuclear-armed submarine drones and what he claims is a “low-flying low-visibility cruise missile armed with a nuclear warhead and possessing a practically unlimited range, unpredictable flight path and the capability to impregnate practically all interception lines is invulnerable to all existing and future anti-missile and air defense weapons.”

The fact that these announcements are happening in the same universe as the ongoing mainstream Trump-Russia collusion narrative is mind boggling. Just yesterday Hillary Clinton jumped on Twitter to help advance the narrative being relentlessly promulgated by Trump’s political opponents that the current administration is still far too soft on Russia, asking if the president will “continue to ignore & surrender” to Russia by not authorizing preemptive cyberattacks on Russian cyber-operations. 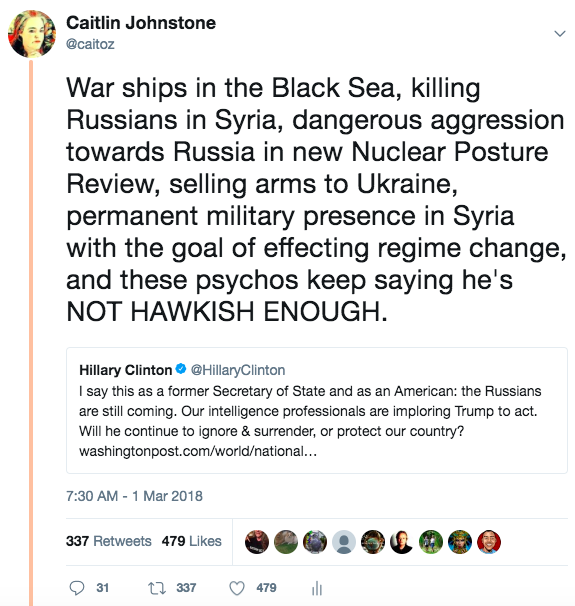 The notion that the “collusion” between Trump and the Russian government is manifesting as consistently mounting aggressiveness directly against one another’s interests is laughable. Obama himself refused to authorize the sale of arms to Ukraine for fear of dangerous escalations against Moscow, the idea that Trump also opposed arming Ukraine was one of the original bases for the collusion accusation outlined in the infamous Steele dossier that started this all, and yet here Trump is acting far more aggressively toward Russia than his predecessor ever dreamed of doing. He is the worst Putin puppet of all time.

This is obvious on its face. Understanding how little actual substance underlies the rest of the establishment Russia narrative can take a lot of research, but the notion that two parties are “colluding” by acting in direct hostility and opposition to one another’s interests is inherently, obviously absurd. And yet this absurdity is still being relentlessly rammed down Americans’ throats, day after day after day.

Why is that? Why are the propagandists taking such bold gambles with their power to retain credibility in the eyes of their audience? Why are they overreaching with inherently absurd narratives about Russia and brazen lies about Syria instead of staying calm and playing more subtle? Why are they acting like desperate, cornered animals instead of like relaxed rulers of the planet holding all the cards?

Because desperate, cornered animals is exactly what they are. 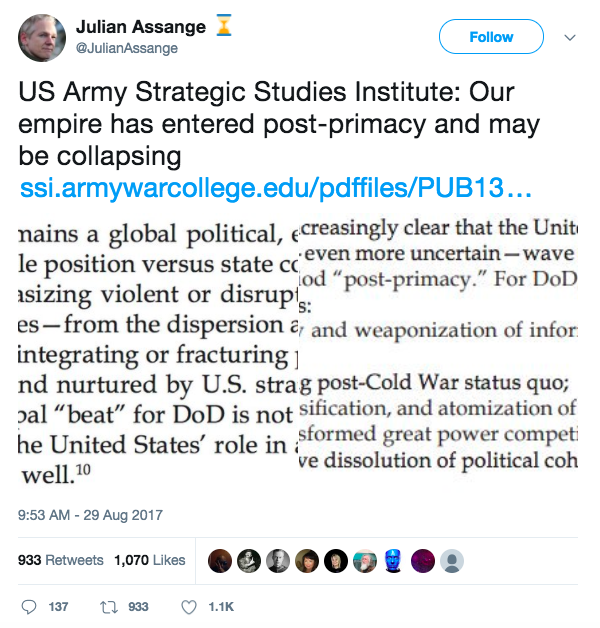 A 2017 Department of Defense Risk Assessment by the US Army Strategic Studies Institute says that the US empire is in what it calls “post-primacy” and may currently be on its way out the door.

“In brief,” the assessment reads, “the status quo that was hatched and nurtured by U.S. strategists after World War II and has for decades been the principal ‘beat’ for DoD is not merely fraying but may, in fact, be collapsing. Consequently, the United States’ role in and approach to the world may be fundamentally changing as well.”

Many, many powerful people have built their kingdoms upon this vast empire, and now that empire is approaching post-primacy. Staying on top of the world and preventing the rise of any rival superpower has been a mainstream tenet of the US-centralized establishment for a long time now, and that appears to be the goal behind all the moves that they are taking to disrupt the Russia-China tandem as well. But they are fighting backed into a corner, and they are getting desperate, and they are overextending themselves. Which is why they look so ridiculous and obvious to anyone who is paying attention.

This is both good news and potentially very bad news. The good news is that once America is no longer the seat of a depraved dominant plutocracy that is trying to rule the world, there will no longer be a vested interest in keeping Americans poor, impotent, and blinded by propaganda in order to ensure that the populace of their home base doesn’t rise up and seize political power. All the resources that now go toward endless war and global domination could then be used by the American people, for the American people, while still maintaining a military to protect the nation’s easily-defended shores. A real economy that isn’t propped up with the barrel of a gun could emerge, and the good qualities of a decent citizenry could enable them to thrive like a real, normal nation.

The bad news is that cornered animals are dangerous, and desperate times call for desperate measures. There is indeed the very real possibility that America’s oligarchs will plunge the nation and its allies into a humanity-threatening world war rather than acquiesce to the emergence of a multipolar world and lose their empire. The more of our fellow humans we can awaken to what is going on, the greater the likelihood of the former future rather than the latter. I really hope we win.

On December 11, 2017, in a serious miscarriage of justice, a jury in West Palm Beach, Florida, ruled unanimously in favor of Florida Atlantic University and against former Media Studies Professor James Tracy, who was suing for reinstatement after his firing in 2016. The jury found that Tracy’s “controversial” articles on Memory Hole Blog were Read More…

For such an ugly and bizarre international fistfight to spring full-blown from a single critical tweet strains credulity. Underlying the Saudis hostile anti-Canadian actions may be a desire to signal the world to stay blind to the kingdom’s internal repressions. Or it may be an economic play with Canadian oil. TORONTO — In a near repeat Read More…

Welcome to The Daily Wrap Up, a concise show dedicated to bringing you the most relevant independent news, as we see it, from the last 24 hours (6/23/19). As always, take the information discussed in the video below and research it for yourself, and come to your own conclusions. Anyone telling you what the truth Read More…