One day after Trump escalated his war of words with the UN, threatening to cut off foreign financial aid over today’s UN vote on the president’s decision to recognize Jerusalem the capital of Israel, the United Nations on Thursday delivered what has been dubbed a “stunning rebuke” of the US President’s Jerusalem decision, voting overwhelmingly to condemn the move and calling on the U.S. to withdraw the decision.

The final vote was a landslide against Israel, with some 128 nations voting in favor of the resolution. Nine countries opposed the resolution while 35 abstained.

While the resolution – a formal statement of a U.N. opinion – is not legally binding, it is represents a symbolic and diplomatic condemnation of Trump’s decision and exerts political pressure on him to reverse the move… which Trump of course won’t do.

As reported yesterday, in the runup to the General Assembly vote, Trump and US Ambassador to the UN, Nikki Haley, warned countries against opposing the Trump administration’s Jerusalem decision. Haley went so far as sending a letter to members of the international body this week, warning that Trump had instructed her to take names, i.e., list the countries that voted in favor of the resolution.The president followed up on that warning on Wednesday, suggesting at a Cabinet meeting that the U.S. could cut off foreign aid for countries that opposed the U.S. in the vote.

The threat did little to stop the countries from voting to blast Trump’s decision. 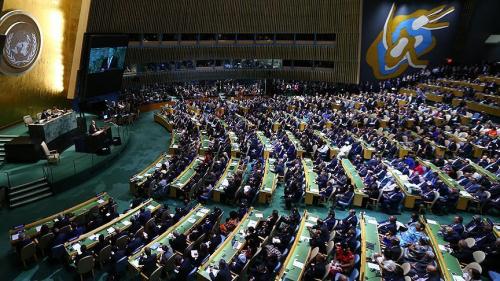 The General Assembly vote came days after the U.S. vetoed a similar resolution in the U.N. Security Council. The panel’s other 14 members voted in favor of that measure – a move that Haley called an “insult” to the U.S. Shortly after the Security Council vote, Arab and Muslim leaders at U.N. called for an emergency special session of the General Assembly to discuss the U.S.’s Jerusalem decision.

In a defiant speech ahead of the General Assembly vote on Thursday, Riyad Al Maliki, the Palestinian foreign affairs minister, cast the Trump administration’s Jerusalem decision as an affront on regional peace and security that has isolated the U.S. from the international community. “Does the United States not wonder why it stands isolated in this position?” he asked.

Turkey, which has led the Muslim opposition to the US Jerusalem declaration, was among the first to speak at the meeting. Turkish Foreign Minister Mevlut Cavusoglu stressed that only a two-state solution and sticking to the 1967 borders can be a foundation for a lasting peace between Israel and Palestine. The minister said that since Jerusalem is the cradle for the “three monotheistic religions,” all of humanity should come together to preserve the status quo.

“The recent decision of a UN member state to recognize Jerusalem as the capital of Israel violates the international law, including all relevant UN resolutions. This decision is an outrageous assault on all universal values,” Cavusoglu said.

The US threats were also condemned by Turkey, with the country’s President Recep Tayyip Erdogan stating that Trump “cannot buy Turkey’s democratic will.” “I hope and expect the United States won’t get the result it expects from there (the UN General Assembly) and the world will give a very good lesson to the United States,” Erdogan said during a speech in Ankara on Thursday ahead of the meeting.

A spokesman for Palestine president Mahmud Abbas triumphantly declared that the “UN Vote is a victory for Palestine.”

Despite being isolated by virtually the entire international community, in her blunt response, Haley warned the international body that the U.S. would remember the vote as a betrayal by the U.N., and that the vote would do nothing to affect the Trump administration’s decision to recognize Jerusalem as Israel’s capital and move its embassy there.

“America will put our embassy in Jerusalem. That is what the American people want us to do, and it is the right thing to do,” she said ahead of the vote. “No vote in the United Nations will make any difference on that. But this vote will make a difference in how Americans view the U.N.”

Haley reminded UN members of the US’ generous contributions to the organization and said that the United States expects its will to be respected in return.

“When we make a generous contributions to the UN, we also have a legitimate expectation that our goodwill is recognized and respected,” Haley said, adding that the vote will be “remembered” by the US and “make a difference on how the Americans look at the UN.”

Ahead of the vote, Israeli PM Netanyahu called the UN a “house of lies.”

“The State of Israel rejects outright this vote, even before it passes,” he said at a ceremony in southern Israel. “The attitude to Israel of many nations in the world, in all the continents, is changing outside of the UN walls, and will eventually filter into the UN as well — the house of lies,” he said.

“Jerusalem is our capital, we will continue to build in it and embassies of countries, led by the US, will move to Jerusalem,” Netanyahu said, thanking Trump and US ambassador to the UN Nikki Haley for “standing by Israel and the truth.”

Israeli envoy to the UN Danny Danon stated that Israel considers Jerusalem its capital, dating back to Biblical times, and the US decision only outlines the obvious. Danon went further and accused the UN of “double standards” and an “unbreakable bond of hypocrisy” with Palestine and prejudice against Israel.

“Those who support today’s resolution are like puppets. You’re puppets pulled by the strings of your Palestinian puppet masters. You’re like marionettes forced to dance, while the Palestinian leadership looks on with glee,” Danon told the gathering.

There is a growing consensus among many observers in Washington that the national security agencies have become completely politicized over the past seventeen years and are now pursuing selfish agendas that actually endanger what remains of American democracy. As Philip Giraldi notes, up until recently it has been habitual to refer to such activity as the Deep Read More…

With the rapidly rising cost of prescriptions and the long list of side effects of most drugs, it should come as no surprise that it is not exactly big pharma’s top priority to consider what is in the patient’s best interest. What you might not realize, though, is that the government plays a large role in helping big Read More…

UPDATE: John Bolton just officially threatened International Criminal Court judges with sanctions. Reinforcing the worldwide perception of the U.S. as “a bully and a hegemon” that will not tolerate attempts by the global community to hold it accountable for its deadly actions overseas, President Donald Trump’s national security adviser John Bolton is set to deliver a speech on Monday that Read More…