The voting machines have decided who will be the next puppet figurehead of the Pax Americana deep state for the next four years. The circus is over and the peanut shells are being swept out of the stands. So what do we have to show for all of it?

Well, I have some good news, some bad news, and some not-so-good news for you. Let’s start with the bad news.

Apparently some people voted for Trump in the belief that he was some sort of anti-establishment truth-telling hero of the working class. I hate to be the one to disabuse you of this notion, so let’s just look at his transition team, his campaign team, the people who have already been tapped to be part of the new administration and the people who are being contacted for potential cabinet appointments. Warning: It’s not a pretty picture.

So who’s leading this transition team that’s helping to sort out the cabinet and move Team Trump into the White House? Oh, just the usual assortment of bankster-connected corporate lobbyists we would expect to be hanging around any president-elect. This time is no exception. From former Goldman Sachs lobbyist Eric Ueland to Koch Industries lobbyist Michael Catanzaro to Aetna / Verizon lobbyist William Palatucci, the gaggle of corporate cronies manning Trump for America Inc. (the actual nonprofit group set up to oversee the transition) are as establishment as they come. And the whole kit-and-caboodle is being run by Chris Christie. Yes, that Chris Christie.

And who are they reaching out to for potential positions in the Trump White House?

Steven Mnuchin – The chief fundraiser for the Trump campaign was not featured in a lot of alt-right cheerleading for the Trump train, and for good reason: He is a 17-year Goldman Sachs veteran who went on to work for Soros Fund Management. Yes, that Soros. Oh, and he donated to Hillary Clinton. But other than that, I’m sure he’s a great fundraiser. Which is why he is apparently a frontrunner to be Secretary of the Treasury in the Trump White House. That’s right folks, yet another Goldman Sachs vampire squid alumni is within a hair’s breadth of taking over the Treasury, just like Hank Paulson and Robert Rubin before him. But don’t worry, because another person in consideration for the Treasury Secretary position is…

Jamie Dimon – I’m going to assume you know who Jamie Dimon is, but just to make sure everyone is aware, let me spell it out in black and white: Jamie Dimon is chairman, president and chief executive officer of JPMorgan Chase, the monstrous banking offspring of JP Morgan & Co. and the Rockefellers’ own Chase Manhattan. Other than Lloyd “God’s work” Blankfein, it would be hard to find a more bankster-y bankster in the world of banksterism. To list Dimon’s entire rap sheet would be an editorial unto itself, but let’s just remind ourselves of his role in the 2008 bailout fiasco via my Federal Reserve documentary, Century of Enslavement: 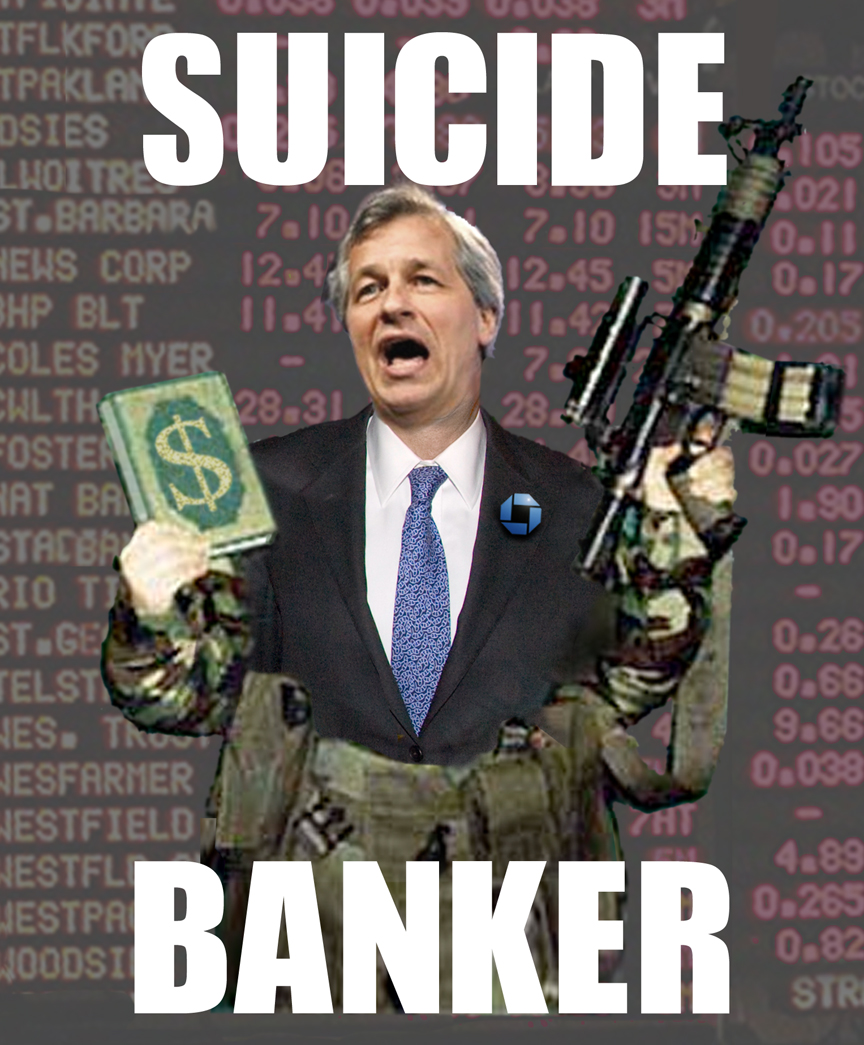 A stunning 2011 Government Accountability Office report examined $16 trillion of bailout facilities extended by the Fed in the wake of the crisis and exposed numerous examples of blatant conflicts of interest. Jeffrey Immelt, chief executive of General Electric served as a director on the board of the Federal Reserve Bank of New York at the same time the Fed provided $16 billion in financing to General Electric. JPMorgan Chase chief executive Jamie Dimon, meanwhile, was also a member of the board of the New York Fed during the period that saw $391 billion in Fed emergency lending directed to his own bank. In all, Federal Reserve board members were tied to $4 trillion in loans to their own banks. These funds were not simply used to keep these banks afloat, but actually to return these Fed-connected banks to a period of record profits in the same period that the average worker saw their real wages actually decrease and the economy on Main Street slow to a standstill.

If there’s any ray of hope here, it’s that (as I discussed with James Evan Pilato on a recent edition of New World Next Week), Dimon recently said he wouldn’t want to become Treasury Secretary due to “Democrat-Republican bullshit.” As Pearse Redmond points out, the Trump team may be floating Dimon’s name right now to make it seem not so bad when they “only” appoint Goldman/Soros insider Mnuchin to the position.

John Bolton – John Bolton is a career Republican insider who served roles in both Bush White Houses, including most recently as UN Ambassador in 2005-2006. He’s also the worst kind of crazed, bloodthirsty neocon who has literally never heard of a foreign invasion he didn’t lust after. Don’t take my word for it; listen to him explain Trump’s foreign policy imperatives…for as many seconds as you can stomach it. And yes, he’s commenting on Trump’s foreign policy because he has been advising the Trump campaign and has been name-dropped for months as a possible Secretary of State in the Trump cabinet. So are all of those who voted Trump over Hillary because they didn’t like her warmongering suitably upset now? Well, if not, there’s always his picks for Secretary of Defense, like:

Stephen Hadley – Hadley is the man who, acting as Bush Jr.’s Deputy National Security Advisor, served as the conduit for the ridiculously fake yellowcake uranium forgeries that were used to help drum up the war in Iraq. He was also the guy who kept the bogus yellowcake story in Bush’s October 2002 speech in Cincinnati, laying out the case for the illegal bloody war of aggression in Iraq. A share of the million dead Iraqis’ blood is on his hands. And he’s in the running to be Trump’s Secretary of Defense.

Reince Priebus – Nothing says “anti-establishment party outsider” like the current chairman of the Republican National Committee, right? Well, guess what: Reince Priebus is under consideration for Trump’s chief of staff. You know, the highest ranking employee of the White House? Priebus is apparently competing against the likes of Stephen Bannon (Trump campaign C.E.O. and former head of Breitbart News) and Jared Kushner (The Donald’s own son-in-law who the Times of Israel takes great pains to point out is an Orthodox Jew, as is Ivanka Trump). Regardless of who gets the spot, the very fact that Priebus is in the running shows that Trump’s feud with the Republican Party was about as real as Hulk Hogan and Andre the Giant at Wrestlemania.

Rudy Giuliani – Rudy Giuliani is an unconvicted 9/11 criminal who illegally cleared the 9/11 crime scene, and who failed to pass on the prior warning that he received about the towers’ destruction. He is also hated by the New York Fire Department for having kicked the firemen off the pile as soon as the gold was discovered. As Associate Attorney General in the US Department of Justice in 1981, he was involved in the PROMIS software octopus. He oversaw New York’s unconstitutional stop-and-frisk policing policy. He is a ghoul in every sense. So naturally the only question is: Which spot will he fill in the Trump cabinet—Attorney General, DHS chief, cybersecurity czar, or something else entirely?

Getting nauseated yet? You should be, but if not, there are many many many more contemptible establishment insiders who are being vetted for potential cabinet positions at this very moment. But don’t worry, this is why I saved the good news for last.

But first, the not-so-bad news: None of these positions have been filled yet. We don’t know who is going to actually make it into the Trump cabinet at this point. Who knows, maybe it will be a bunch of swell, upstanding Beltway outsiders, non-banksters and populists who are committed to the principles of human freedom. Trump and Change 2016! 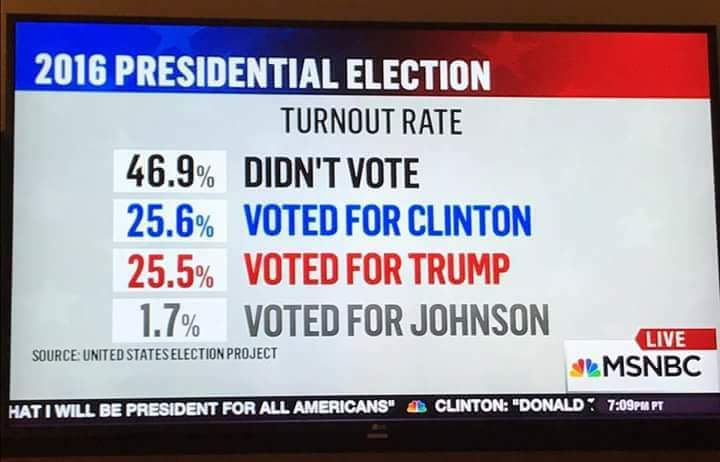 That’s right, the electorate favored nobody at all by an almost 2-to-1 margin over either fake, controlled political puppet. Turnout was down from previous elections. Things are looking good.

For those who stayed home out of principle: I salute you.

For those who stayed home out of apathy: Can I interest you in some reading?

For those who voted for Clinton: Why are you on this website?

And for those who voted for Trump: Will you commit to standing by the principles you thought you were voting for when you cast your ballot, or will you rally around the party flag as a new crew of neocons and banksters and establishment insiders step into their pre-ordained roles? And if so, will you re-examine what your vote actually did, or will you simply say “I’ll show them! I’ll vote them out next time!” Because if it’s the latter, then you haven’t learned anything at all.

MSNBC’s Rachel Maddow detonated an explosive social media backlash upon the release of two of President Trump’s sought-after IRS documents from 2005 on Tuesday evening which had been predicted by many to evince fraud or corruption — but, instead, proved the billionaire business mogul paid a higher percentage in taxes than Mitt Romney or even socialist-leaning, Bernie Sanders. With Read More…

(TFTP) As YouTube cracks down on peaceful channels, censors alternative media, and allows child exploitation videos to flourish, a coalition of 23 child advocacy group has come forward with damning claims against Google’s behemoth video hosting site. Citing multiple violations of child protection laws, the coalition has filed a complaint with the US Federal Trade Commission to expose them. Read More…