Damascus, Syria – In a story that Western corporate media has steadfastly refused to report on for over two weeks, shortly after the liberation of Aleppo by the Syrian Arab Army (SAA), Nusra fighters contaminated the water supply to Damascus. On December 22, by dumping diesel fuel into the water supply at Wadi Barada, Nusra fighters made the water unfit for human consumption.

The intentional blockade of water from Barada, to over 5 million people in Damascus, is further exacerbating the massive humanitarian disaster in Syria.

According to a report by Moon of Alabama:

There is a humanitarian catastrophe unfolding in Syria and the “western” media ignore it.

On December 22 al-Qaeda aligned Takfiris in the Wadi Barada valley shut down the main water supply for the Syrian capital Damascus. Since then the city and some 5-6 million living in and around it have to survive on emergency water distributions by the Syrian government. That is barely enough for people to drink – no washing, no showers and no water dependent production is possible.

This shut down is part of a wider, seemingly coordinated strategy to deprive all government held areas of utility supplies. Two days ago the Islamic State shut down a major water intake for Aleppo from the Euphrates. High voltage electricity masts on lines feeding Damascus have been destroyed and repair teams, unlike before, denied access. Gas supplies to parts of Damascus are also cut.

The campaign is designed to block utilities to government-held areas as revenge for the liberation of east Aleppo, and to sow additional chaos as to stifle the Syrian government’s consolidation of control in war-torn Syria.

Adding credibility to the idea that this water blockade is part of a coordinated effort to further destabilize Syria, the U.S. and U.K. -funded White Helmets are apparently now directly involved in the water blockade. Although often portrayed in the “western” corporate media as heroes, and recently nominated for a Nobel Prize, many Aleppo residents claim that the group is actually the civil defense for the Nusra Front – al-Qaeda’s affiliate in Syria.

Over 60 dead and 100 injured in rebel-stronghold Azaz North Aleppo after huge car bomb. No white helmets here due to low propaganda value pic.twitter.com/XylqjJ9ecn

Moon of Alabama went on to note:

On December 22 the water supply to Damascus was suddenly contaminated with diesel fuel and no longer consumable. A day later Syrian government forces started an operation to regain the area and to reconstitute the water supplies.

Photos and a video on social media (since inaccessible but I saw them when they appeared) showed the water treatment facility rigged with explosives. On Dec 27th the facility was blown up and partly destroyed.

The Syrian government attempted to send repair teams to restore the flow of clean water to the millions of civilians in Damascus, but access to the site was denied by anti-government forces that tainted the water supply — and they are currently still in control of the area. The White Helmets then attempted to claim that it was SAA forces that destroyed the facility, a claimed denied by the Syrian government.

Interestingly, pictures posted by insurgents revealed them to be proudly standing within the destroyed facility — making the victory sign — on top of the rubble of a collapse. This would be considered odd behavior if it were actually SAA that did the damage, but which makes perfect sense if they intentionally damaged the facility themselves after poisoning the Damascus water supply. 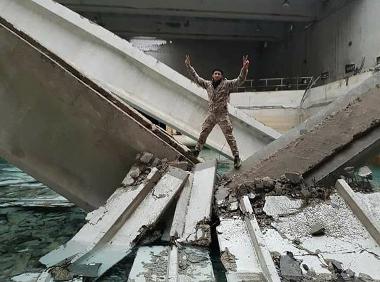 Interestingly, some “civil” groups, including the White Helmets, offered access to the facilities, which starkly exposed collusion between the White Helmets and the terrorist forces in control of the area:

Essentially, the terrorist forces that poisoned the water to millions of people are now offering to allow teams in to fix the water facilities if the SAA and Hezbollah stop their attack to reclaim the area.

Here is the attachment to the tweet. Note the logo of the White Helmets as a signatory to the letter.

You will likely recognize the White Helmets logo in the middle of the second row. Here is a magnified view for closer inspection: 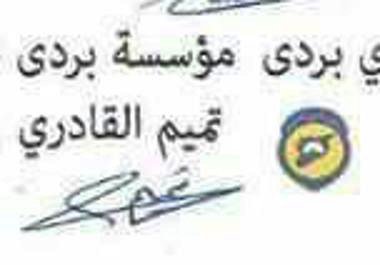 For comparison, here is the Syrian Civil Defense aka White Helmets’ logo as taken directly from their website.

There is no mistake that the White Helmets’ are signatories to this document, which raises some serious questions about why this group is working with an al-Qaeda affiliate that poisoned the water supply to over 5 million people. For a group that is purported by Western powers to be “impartial” and for “all Syrians,” the act of being signatory to this document, that in essence is an attempt to blackmail the Syrian government, reeks of strategic collusion with the West against the Assad government.

According to Consortium News:

Not only do they only operate in rebel-controlled areas but they are a source of propaganda about the war, indeed their very existence is an element in the larger propaganda campaign to rally international support for a “regime change” war in Syria. The “White Helmets” brand was conceived and directed by a New York-based marketing company named “The Syria Campaign,” which itself was “incubated” by a larger politically oriented marketing company called Purpose.

Along with managing the online and social media promotion of the White Helmets, the Syria Campaign has parallel efforts in support of “regime change” in Syria. One of these efforts has been to criticize United Nations and humanitarian relief organizations that supply aid to displaced persons living in areas protected by the Syrian government.

“The allegations made by the Syria Campaign and others were written by people who know nothing about the UN and how it must work,” according to an NGO worker operating in Damascus.

The confluence of activities exponentially increases the possibility that the illegal blockade of water to civilians in Damascus is part of an organized campaign under Western command that uses the White Helmets in a proxy public relations capacity for the ongoing Syrian regime change operation.

The fact that the White Helmets signed onto a document that essentially tells the Syrian government that the water supply of over 5 million people will be held hostage until they cease attempting to regain territory from terrorist forces is nothing less than criminal. It also seriously calls into question the nature of all the White Helmets’ activities in Syria.

A seven-year-old Israeli firm founded by three veterans of Israel’s military intelligence unit is raking in millions selling CIA-tier hacking software to governments around the world. With over 200 employees, a sales arm in Bethesda, Maryland, and a long list of clients identified by watchdogs which have dubious civil rights records, the NSO Group – Read More…

Welcome to The Daily Wrap Up, a concise show dedicated to bringing you the most relevant independent news, as we see it, from the last 24 hours (12/28/19). As always, take the information discussed in the video below and research it for yourself, and come to your own conclusions. Anyone telling you what the truth Read More…