This idea of “regime change,” which has seemingly gone mainstream today, is one that was, up until quite recently, dismissed as some conspiracy theory, or other such irrational rantings of those who do not have the requisite and uncompromising jingoistic mindset. Today, the topic of regime change — the term having been given a facelift in an effort to distort its true historical meaning — is now being put forward as a solution-based policy of the US, despite its war-tattered history of leaving absolutely broken countries in its wake, after being bestowed with the US “gift” of “liberation.”

As I have often said — mostly to appease those who cling to the hope that these actions, as horrendous as their results may be, are done with the best of intentions — the US has an unblemished record when it comes to delivering the exact opposite of what is promised in this regard, so even if these effort were carried out with true intent, it is painfully clear that this policy does not work.

Every single country that has become the focus of forceful US regime change, has been left in utter ruin, leaving the very people whom the US claimed to be fighting to protect, free or otherwise liberate, in not only a very dangerous and precarious situation, but one far worse than they previously endured. More to the point, in many cases, their lives prior to the US-led intervention were not as dire as was being painted by the western media, and even prosperous and peaceful to a large degree. Of course the most obvious and now widely acknowledged example of this distortion of reality is that of Libya.

Despite the western media’s unyielding resolve to maintain the lie to this day, the world at large has come to understand that quite literally everything that was propagated by the governments seeking to take control at the time of Libya’s downfall, was misrepresented, manipulated or completely fabricated.

In 1967 when Gaddafi came to power, Libya was one of the poorest countries in all of Africa. However, by the time he was assassinated by the West in 2011, Libya had the highest GDP and life expectancy on the continent. In fact, fewer people lived below the poverty line than in the Netherlands. Gaddafi practiced the redistribution stage of liberation by nationalizing oil wealth to sustain progressive social welfare programs for all Libyans. Money from oil proceeds was deposited directly into every Libyan citizen’s bank account. Under Gaddafi’s rule, Libyans enjoyed not only free healthcare and free education, but also free electricity and interest-free loans — not really the image of the maniacal dictator killing his own people that was unquestioningly put forward by the corporate media. Gaddafi was not entirely innocent however, and he should not be presented as some infallible angel of peace, yet the narrative being forced by the US to justify his execution, could not have been further from the truth. 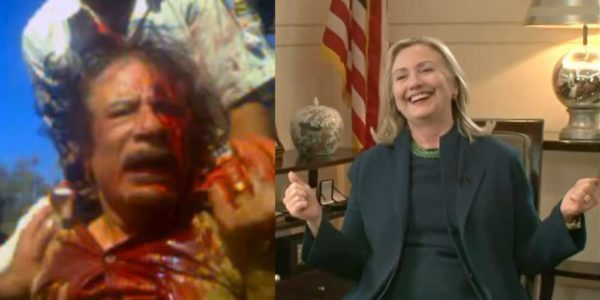 Most importantly, Gaddafi sought to create a gold-backed currency which would have further liberated his nation from outside rule, yet which directly threatened US control in the region; and just like we have seen in the past, every time a nation seeks to move away from the almighty dollar, suddenly, a dire need to “liberate” that very country’s people arises, and regime change is pushed forward. Yet, as I said earlier, up until recently, that plan of regime change was only quietly discussed in back rooms away from the discerning eyes of the American people, and they were instead fed a barrage of misinformation designed to create moral outrage and justification for rescuing a struggling people from an evil dictator — a tired story line that we have seen on repeat for decades.

Today however, likely due to the efforts of those like ourselves to call out the reality of these events, they can no longer hide their true intentions of toppling nations in order to exert their dominance. Yet they nonetheless continue to push the same moral justification, only now, instead of hiding behind the facade of coming to the rescue, and subsequently coming to a conclusion of regime change as a last resort, regime change is the starting point, the plan from the beginning, and the American people are along for the ride.

The point being, these efforts have very little, if anything at all, to do with helping an oppressed people. As we can see clearly in Libya today where there is now an open slave trade taking place and those “oppressed people” are now under the authoritarian rule of the very extremist factions the US funded and armed in order to take out Gaddafi; and all the liberties that Gaddafi had carved out for his people vanished the moment he was removed from power and horrendously murdered on live television. Even if there was a genuine desire to help the Libyan people, after such a result, how can anyone support the US in pursuing such a venture in yet another country?

I do however think most are beginning to understand that the US, and those pulling its strings, indeed got precisely the result they wanted, not just in Libya, but in Iraq, Afghanistan, any number of African nations, and many, many others — destabilization and control.

The ongoing crises in Syria and Venezuela have been described by mainstream media as the result of failed leadership. In truth, their troubles are the result of U.S.-led regime change efforts masquerading as humanitarian aid to control both nations’ lucrative oil and gas industries. Separated by thousands of miles and embroiled in ostensibly unique conflicts Read More…

WikiLeaks Emails And Their Contradicting Origin Stories: Ex-British Ambassador Claims He Received The Emails In a D.C. Park

By now, most have probably heard of the infamous batch of emails that were released by WikiLeaks during the election, which influenced the narrative and, whether or not by design, certainly affected the result. The two leaks that have been at the center of attention are the Democratic National Convention (DNC) emails and the emails of Read More…

3 Replies to “The True Face Of American Regime Change”