On an ominous June day in 1971, President Richard Nixon declared to the public that drug abuse was now “public enemy number one.” With this one statement he would irrevocably change the course of the nation by laying the foundation for a reign of unprecedented political misappropriation and corruption all in the name of the “War on Drugs” or more accurately the “War on Marijuana.”

The War on Drugs began as corrupt as it is currently today; a war with no possible end that promotes profiteering on the backs of those who desperately need the help of the very men profiting on their demise. This “war” was declared on all drugs, yet one in particular had caught the attention of some prominent American families and businessmen due to its ability to render their products obsolete. Marijuana’s versatility in the medical and industrial field played a major role in the creation of this policy. Whether or not the Nixon administration fully understood what they were creating with this declaration, there can be no doubt that the group had a clear understanding of the policy’s political and societal ramifications and what that would mean for current and future politicians in the United States. By effectively criminalizing addiction, addicts became potential profit in the eyes of the system.

“Attorney General Kleindienst for Nixon, was quoted after Nixon declared Drugs ‘public enemy number one’ as saying that they knew in the Nixon administration that drug treatment worked and incarceration did not, but the enormous political benefit by declaring a war on drugs, that can’t really fight back, he said they chose the incarceration route for political reasons, and then were absolutely overwhelmed by the positive political benefits that they received after the declaration.” -Judge Jim Gray – Former Orange County Supreme Court Judge 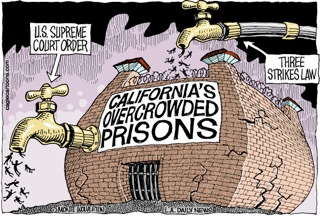 Once you make it profitable to incarcerate people; once you give people a profit motive to put others in prison, you change the fundamental process of the justice system into a process of profit and loss. These are people’s lives, and shouldn’t be a company’s bottom line. This dynamic incentivizes those in charge to incarcerate or maintain incarceration, whether or not it’s justified, solely to maintain profitability. These prisons have a contract to maintain 80% capacity at a minimum, crime could go down and it wouldn’t matter, their quota must be met. In California since 1980, 20 prisons were built, 14,000 prison guards were hired and 5000 teachers were fired. Prisons have become a billion dollar industry that are largely fueled by this nation’s fight against marijuana.

Over 2 million adults are currently incarcerated in the United States, that’s the highest incarceration rate in the world, and over 30% of that is for marijuana possession. In the 1.5 million arrests on drug related offenses in 2011, about 50% were for marijuana use. In 1965, police were solving about 90% of the murders in this country. Today that’s under 65%, and that’s considering all the tremendous advances in technology,

DNA evidence, etc. The focus has clearly shifted. Without the ever-increasing conviction for petty marijuana related crimes, these prisons would fail to meet their quotas and their entire business model would collapse. For this reason amongst many, this industry is on the forefront of maintaining the war on marijuana.

Americans have begun awakening to the massive collusion that surrounds the legality of this plant. This corruption has bled into every aspect of government that deals with marijuana for the sole purpose of maintaining its schedule I status, at all costs. The group that stands to perceivably lose the most with the legalization of marijuana would be the pharmaceutical industry. One would think that the discovery of a new ground-breaking medicine that heals everything would be exactly what those in the business of medicine would want. Unfortunately, Big Pharma got out of the curing business a long time ago. All of its efforts have gone into creating a perpetual cycle of treatment, because there is no money in curing.

Most of the major groups fighting to keep marijuana perceived as the most deadly drug known to man, just so happen to be funded by companies that stand to lose money with the rise of an all-natural medicine that can be grown in one’s back yard. These groups preach from on high about the moral and compassionate reasons for opposing legalization when in reality the greedy Big Pharma is pulling all the strings. The Community Anti-Drug Coalition of America (CADCA) and the other groups leading the fight against relaxing marijuana laws, including the Partnership for Drug-Free Kids (formerly the Partnership for a Drug-Free America), derive a significant portion of their budget from opioid manufacturers and other pharmaceutical companies.

The Nation obtained a confidential financial disclosure from the Partnership for Drug-Free Kids showing that the group’s largest donors include Purdue Pharma, the manufacturer of OxyContin, and Abbott

Laboratories, maker of the opioid Vicodin. CADCA also counts Purdue Pharma as a major supporter, as well as Alkermes, the maker of a powerful and extremely controversial new painkiller called Zohydro. The drug, which was released to the public in March, has sparked a nationwide protest, since Zohydro is reportedly ten times stronger than OxyContin. Janssen Pharmaceutical, a Johnson & Johnson subsidiary that produces the painkiller Nucynta, and Pfizer, which manufactures several opioid products, are also CADCA sponsors. With primary financial backing that stand to lose billions, it is clear where the motivation comes from.

There are many who undoubtedly believe wholeheartedly that marijuana is the worst substance on the planet. This most definitely derives from the 70 year smear campaign designed to instill just that type of fear. It is unfortunate that many have yet to see the light in regards to marijuana’s curing properties; even more so unfortunate that those very same individuals are being manipulated into fighting a war for an elite group with no one’s interest in mind except their own.

From the prison industry, to the pharmaceutical industry, to the timber industry, billions of dollars are being thrown at the failing marijuana war in an attempt to maintain the facade of a evil drug that will corrupt your children and ruin your life. This however is a remanent of a time before the internet; a time when the government could be caught in a lie and there was time to secretly hide the evidence. That time has come to an end. When one hears, many hear. When one sees, we all see.

6 Years Ago Today, The US Helped Murder Gaddafi To Stop The Creation Of Gold-Backed Currency

Six years ago today, the West took it upon itself to use NATO to overthrow Libyan leader Muammar al-Gaddafi — not for any humanitarian threat to civilians as had been repeatedly claimed — but because his planned roll-out of a new currency to be used across Africa posed a palpable existential threat to central banks Read More…

Visionary inventor and entrepreneur Elon Musk revealed in a recent interview that his thoughts on society are at least somewhat aligned with anarchism. On September 24th, 2015, at an event by the German Federal Ministry for Economic Affairs and Energy in Berlin, Musk was asked about his perspectives Musk, is of course, the CEO and CTO Read More…

In a blow to victims of human trafficking worldwide, a massive child sex ring was exposed in Haiti — involving international ‘peacekeepers’ with the United Nations as well as other high-level officials from around the world — and no one is going to jail. For years, UN peacekeepers, their high-level commanders, and other ‘personnel’ from around Read More…

One Reply to “Ten Myths About Marijuana That No One Should Believe – Part 10: Opposition to marijuana legalization is driven entirely by cautious prudence”