These two orphans were best friends in Africa, so imagine their surprise (and happiness) when they happened to be adopted by neighboring American families.

“Best Friends Forever” is a term used lightly in the U.S., but not for Kelvin and Alfonso, two orphans from Mozambique who have been through more than most people at the age of 18—and they’ve been by each other’s side the whole time.

The two became friends at a young age at first because their mothers were friends, but both of their worlds changed at the age of 4. After both of their parents died from AIDS, Kelvin and Alfonso leaned on each other for support at the orphanage they were in. Experiencing the same hardship of losing a parent to a terrible disease allowed them to understand each other in a way that others didn’t.

At the age of 10, just six months apart, both children were adopted separately by American families. Though they were happy to have new, loving families, it was difficult for the boys to part from each other after years of being best friends.

To their surprise, Kelvin and Alfonso happened to both be adopted by families living in Gilbert, Arizona, and the families were living just two miles away from each other. Once the two families learned of their friendship in Mozambique, they arranged a surprise reunion that secured their friendship from then on. 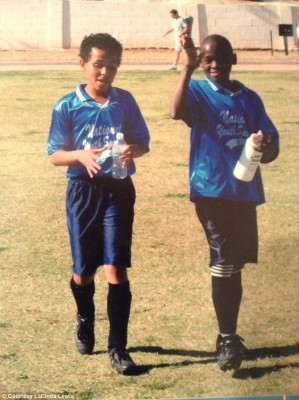 Kelvin said once they reunited, “My parents asked me if we want to be in the same class, like in elementary school, in 5th grade, and I said, ‘Heck yeah!’”

Kelvin and Alfonso have gone to the same schools since then and were even both on the varsity soccer team at their high school.

Alfonso told People, “The only way this makes sense to me is that there was a higher plan for our friendship to last. I needed Kelvin back in Mozambique, because we relied on each other for comfort. And I can’t explain it, but it just made sense that he would end up in Arizona too.”

Both men have been accepted to Brigham Young University and will be roommates when they start school in the fall.

It’s important to both of them that they stay grounded in their roots by giving aid to others in their birthplace of Mozambique. Kelvin plans to be a doctor in Mozambique and Alfonso wants to earn a degree in international studies so that he can improve adoption processes for potential parents in other countries.

As for their future beyond that, Kelvin told People, “We talk about growing old, like sitting on our porches in a rocking chair, and living next door to each other, having our kids be best friends. We’re definitely more than friends, we’re brothers.”

Yes, the blockchain is truly revolutionary. Yes, bitcoin is Tulipmania 2.0. Yes, cryptocurrency is a nail in the coffin of the bankster parasites. Yes, digital currency is a tool of the totalitarian tyrants. No, these statements are not contradictory. But don’t worry if you think they are. You’re just a victim of the bitcoin psyop. Read More…

Antidepressants commonly prescribed for children and adolescents are no more effective than a placebo for treating major depression — and in some cases, can be downright harmful, according to a landmark new study. Published in the Lancet, the research denotes the “first comprehensive comparison of commonly prescribed antidepressant drugs so far.” Medical researchers analyzed 34 pharmaceutical trials involving Read More…

Why A Harvey Weinstein Moment Is Needed For America’s Wars