The study conducted by The Institute for the Study of Labor (IZA) in Bonn, Germany, the same firm that recently found that legalizing medical marijuana was associated with fewer deaths on the highways, is titled “High on Life? Medical Marijuana Laws and Suicide,” reports Christopher Shea at the Wall Street Journal. This study is by no means new, and was completely ignored when first released. However, as more states decide to allow medical access to cannabis, more statistics become available to reinforce these findings. 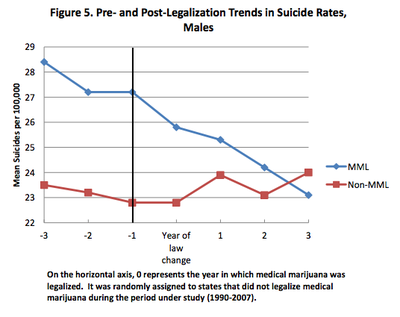 reduction in the suicide rate of 30- through 39-year-old males.”

“Estimates of the relationship between legalization and female suicides are less precise and are sensitive to functional form,” according to the study’s authors, D. Mark Anderson, Daniel I. Rees, and Joseph J. Sabia.

”Could marijuana use help individuals cope with the negative shocks to happiness that, according to Hamermesh and Soss (1974), lead to suicide?” the study’s authors ask. “Alternatively, could marijuana use magnify the impact of SLEs [stressful life events]?”

While the majority of epidemiological studies have found that cannabis use is positively associated with both the symptoms of depression and suicidal ideation, according to the study, “any association between marijuana use and outcomes such as these could be driven by difficult-to-observe factors … or simply reflect self-medication.”

A recent review of the literature, according to the study, noted that “the majority of studies for affective outcomes [such as depression and suicidal ideation] did not adequately address the problem of reverse causation as a possible alternative explanation for any association observed.”

In other words, rather than increasing the likelihood of suicide, it seems that previous studies haven’t sufficiently examined the possibility that the association between cannabis use and those who commit suicide is due to those already suicidal choosing to self-medicate with marijuana.

“The current study avoids the problems of reverse causality and unobserved heterogeneity at the individual level by examining the relationship between the legalization of medical marijuana and completed suicides,” the study’s authors note.

It is also quite possible that the reduction in alcohol use due to medical marijuana legalization, noted in IZA’s previous study, plays a major factor in the reduction of suicide in states which allow its use. Previous research shows as well that there is a strong connection between the consumption of alcohol and suicide-related outcomes. According to the study’s authors, this “raises the possibility that medical marijuana laws reduce the risk of suicide by decreasing alcohol consumption.”

“Although 16 states have passed medical marijuana laws, and others are considering legalization, very little is known about the effects of these laws,” the study’s authors conclude. “Policymakers weighing the pros and cons of legalization should consider the possibility that medical marijuana laws may lead to fewer suicides among young adult males. However, the exact mechanism through which suicides are reduced remains a topic for future study.”

If America Wasn’t America, The United States Would Be Bombing It

Editor’s Note: With this type of factually correct, yet highly controversial article, I always like to state that this article is not “anti-American” as many often label such content. It is in fact anti- the war-mongering entities that have stolen America. All of this truly took place, and if you doubt that, simply do the Read More…

Ten Myths About Marijuana That No One Should Believe – Part 7: There are over 400 chemicals in marijuana

The perception of cannabis as an evil and utterly useless drug began, as most things do, because of money and a potential loss of profit. Since the moment hemp was seen as a threat to the wrong men’s pocket books, every American has had a fabricated perception of cannabis forced into their daily lives to Read More…

In the months since the spread of COVID-19 was declared a pandemic by public health authorities a debate has raged over how dangerous the virus truly is, the effectiveness of masks and social distancing, and even whether the virus exists at all. Setting aside most of those debates for a moment, one of the driving Read More…