– The powers not delegated to the United States by the Constitution, nor prohibited by it to the states, are reserved to the states respectively, or to the people.

Five law-abiding citizens of Washington state are each currently facing 10 years imprisonment for cultivating marijuana completely within state regulations. One of whom is 70-year-old Larry Harvey. For 15 years now, marijuana has been legalized for medical and recreational purposes in the state of Washington. One citizen who wishes to remain nameless said,

“I don’t see how this family can be arrested and charged when just down the road you can walk into a store and buy a joint? That just doesn’t make sense.”

In this small town of Kettle Falls, the Harvey family choose to garden, hunt and fish for nearly all of their food. This was their American dream; to be self-sufficient and self-sustaining. Cannabis was only one of the dozens of legal herbs being grown. Despite claims to the contrary, no attempt was made to distribute this

marijuana in any way. This cannabis was grown for personal use for medical needs. A large sign with a green cross was staked by the garden to signal that its use was medical and within the law. However, in this gentle homestead only miles away from other legal marijuana sales, a Federal raid took place that shattered this tranquil dream.

Once again, the average citizen is being prosecuted due to an illegal political battle between a state’s right to self govern, and the overstepping Federal government’s infringement on that governing body. Regardless of any previous doubts or uncertainty, the majority of Americans are now in agreement that cannabis should be allowed or regulated in some capacity. One would be hard pressed to find anyone who still believes that marijuana is as harmful as the government would have you believe, let alone that it has no medical value. Currently a hearing is in deliberation that could remove cannabis from its current schedule one placement. It would seem that the Feds wish to reap as much confiscated profit as possible before that change takes place. In addition to seizing the family’s marijuana plants, the Drug Enforcement Administration confiscated the family’s 2007 Saturn Vue, $700 in cash and their legally owned firearms.

The five federal defendants are all qualified patients in compliance with Washington state law. Larry himself is a medical marijuana patient who suffers from numerous ailments including heart disease, advanced gout and severe pain caused by a lifetime of work as a commercial fisherman and a long-haul 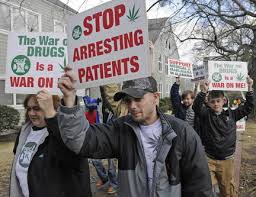 truck driver. In the Harvey home, cannabis was legally cultivated and used to treat the family’s ailments. Despite the Obama Administration’s repeated claims that it does not target seriously ill patients, Larry was jailed for several days after the raid and denied medical attention which resulted in irreversible bodily harm. Now, Larry and his family are being prosecuted to the fullest extent of the law; being charged with six felonies each: conspiracy to manufacture and distribute marijuana, manufacture of marijuana, possession with intent to distribute marijuana, distribution of marijuana, possession of a firearm (for which Harvey had a permit to own) in furtherance of a drug trafficking crime and maintaining a drug-involved premises. The firearm found is being used to compound the charges to a minimum ten-year sentence. This Federal raiding party and its spoils trample multiple constitutional rights (including the second, fourth and tenth amendments) of the family and Americans in general.

The continuing hypocrisy and contradiction that surrounds the political issue of legalization is not only a tiresome and transparent game the government is playing, it’s also costing honest hard-working Americans their very livelihood. The entire country has heard Obama claim that actions of this type were in the past. It would seem that others in the government don’t care much about the President’s statement. U.S. Attorney for the eastern district of Washington Michael Ormsby stated his intent to “vigorously” target individuals “even if such activities are permitted under state law.” There is no room in United States leadership for an official who chooses personal opinion over the very citizens that elected him to office. To hear an elected official state outright that he doesn’t care what his constituents need, but instead chooses to oppose the will of the people for personal reasons; that’s downright un-American.

The entire country is bearing witness to the revolution of the mind taking place as more states defy Federal law. This conflict of government direction is not only detrimental to its citizens and their compliance, but also harmful to the worldwide public opinion of this country.

“This case is another glaring example of what’s wrong with the federal policy on cannabis, if the Justice Department can continue to aggressively prosecute individual patients without any consequences from the White House, none of these DOJ memos are worth the paper they’re printed on.” -Kari Boiter, the Washington State Coordinator with Americans for Safe Access

If the President of the United States of America cannot see the majority will into action, or subsequently see that his directive is followed, then either there is something fundamentally broken about this country or said leader is giving out empty promises. In either case, the world is watching.

Welcome to The Daily Wrap Up, a concise show dedicated to bringing you the most relevant independent news, as we see it, from the last 24 hours (1/24/19). As always, take the information discussed in the video below and research it for yourself, and come to your own conclusions. Anyone telling you what the truth Read More…

A new law in Oregon could lead to residents having all of their guns confiscated based on a single complaint, raising concerns about the possibility of corruption if false complaints are used to strip law-abiding citizens of their right to defend themselves. Senate Bill 719, which is defined as one that “Creates process for obtaining Read More…

Welcome to The Daily Wrap Up, a concise show dedicated to bringing you the most relevant independent news, as we see it, from the last 24 hours (3/23/19). As always, take the information discussed in the video below and research it for yourself, and come to your own conclusions. Anyone telling you what the truth Read More…