A panel of three justices unanimously rejected the petitions, siding with the Israeli Defense Forces (IDF) which said that the protesters constitute a legitimate danger to Israeli soldiers and citizens, pointing to several Hamas figures which have been taken out by snipers – 50 according to Hamas leader Salah Bardawil.

Hamas leader Salah Bardawil said in a televised interview that of the “62 people martyred, 50 were Hamas.”

Gaza’s Hamas-run health ministry stated that 62 total Palestinians were killed during the riots on Monday, most by Israeli gunfire, and more than 2,700 were wounded.

“Take his word for it. This was no peaceful protest,” said Israel Defense Forces spokesman Jonathan Conricus, who tweeted out the interview. –National Review

Israel maintains that the use of live fire is in line with both domestic and international law – arguing that the demonstrations fall under the country’s rules-of-engagement in its longstanding conflict with Hamas, which governs the Gaza Strip.

Israel’s ruling is “a green light to its continued use of snipers and live fire against Palestinian protesters,” said human rights organization Adalah.

“The Israeli Supreme Court completely ignored the broad factual basis presented to it by the petitioners, which includes multiple testimonies of wounded and reports of international organisations involved in documenting the killing and wounding of unarmed protesters in Gaza”.

Sharona Weiss of Israeli NGO Yesh Din – one of the groups that signed the rejected petitions, tweeted “The High Court of Justice rejected the petitions, relying on the media rhetoric & the legal evasions of the military, thus missing the opportunity to prevent further killings and injuries on a shaky legal & moral basis.”

The High Court of Justice rejected the petitions, relying on the media rhetoric & the legal evasions of the military, thus missing the opportunity to prevent further killings and injuries on a shaky legal & moral basis. https://t.co/HPBXTn3ixi

The ruling comes amid the introduction of a controversial new bill put forth before Israel’s Ministerial Committee for Legislation in the Knesset on Sunday would ban taking videos or photos of Israeli soldiers in the process of arresting or subduing Palestinians. 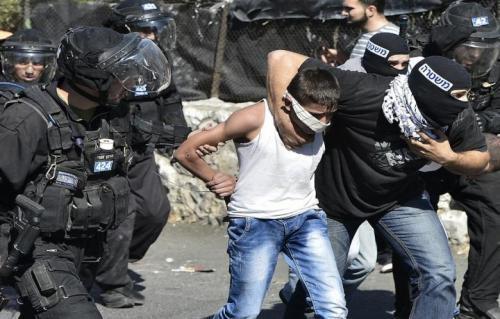 The legislation, if passed, could result in a punishment of 5 to up to 10 years in prison for merely recording encounters between Israeli soldiers and Palestinians.

The bill reads, “anyone who shoots a video or a photo, or records soldiers while they are doing their job, with the aim of disturbing the morale of soldiers and citizens, will be sentenced to five years imprisonment. In case this is done with the aim of destabilizing the state’s security, the perpetrator will be sentenced to ten years imprisonment.”

As we noted earlier, it appears those behind the bill simply don’t want people with the wrong politics to be able to film, with the further suggestion that foreign governments are fueling anti-Israeli activism.

The bill’s sponsor, MP Ilatov, claimed further that “the majority of these organizations receive support from associations and governments with anti-Israel agenda, and that they are using these contents to jeopardize Israel and its security,” according to Middle East Monitor.

He decried it as “unreasonable for an activist or leftist organization, supported by a foreign entity, to be granted the freedom to document soldiers while doing their duties. The best conditions must be provided for the soldiers to do their duty without worrying about any activist or organization publishing their photos to intimidate them.”

There’s no doubt this attempt is in response to the dozens of viral videos which show Palestinian civilians — some of them teenagers — shot in open fields by Israeli snipers, sometimes while running away from Israeli positions.

Not exactly Palestinians sending their children in to taunt the Israelis, as is currently being claimed.

Protests began on March 30 calling for the right for Palestinian refugees to return to the homes and villages they were forcible removed from in 1948. 113 Palestinians have been killed by Israel in the protests, while over 12,000 people were wounded. At least 3,569 were victims of live fire, including doctors, paramedics, journalists, women, children and the elderly – prompting UN rights experts to denounce Israel over “disproportionate use of force.”

New information released by the FBI has brought fresh scrutiny to the possibility that the “Dancing Israelis,” at least two of whom were known Mossad operatives, had prior knowledge of the attacks on the World Trade Center. For nearly two decades, one of the most overlooked and little known arrests made in the aftermath of the September Read More…

Nations are beginning to take more seriously the control of their respective information space after years of allowing US-based tech giants Google and Facebook to monopolize and exploit them. Vietnam, according to a recent GeekTime article, is the latest nation to begin encouraging local alternatives to the search engine and social media network in order Read More…

The Pot Calling The Kettle Black: The Negligent Practices of Mainstream Media

Yet again, mainstream media is revealing just how negligent and irresponsible it can be by releasing a story about President-Elect Trump planning to meet with the Republic of Congo President, Denis Sassou-Nguesso. This information comes solely from a tweet sent out by a spokesman for Sassou-Nguesso. The fact of the matter is that Trump never planned Read More…