Nearly two-thirds of the U.S. population is at risk of being subjected to random “citizen checkpoints” because they live within 100 miles of a U.S. border.

Washington, D.C. – (TFTP) The Trump administration’s immigration crackdown has brought increased attention to the little known “Constitution-Free Zone” that extends 100 miles inland around the entirety of the United States. While the practice of Border Patrol employing “citizen checkpoints” within this zone is not a new practice, it has drawn increased scrutiny from civil libertarians and they’re increasingly popping up.

Most people would be surprised to know that far away from the border between the U.S. and Mexico, on highways in Maine, New Hampshire, and numerous other states, U.S. Customs and Border Protection checkpoints are stopping vehicles without any reasonable suspicion and asking them if they are legal U.S. citizens.

Incredibly, nearly two-thirds of the U.S. population lives within the 100-mile border zone, according to the American Civil Liberties Union, and it includes many major cities and several entire states, including Florida, Michigan, Maine, and Hawaii. 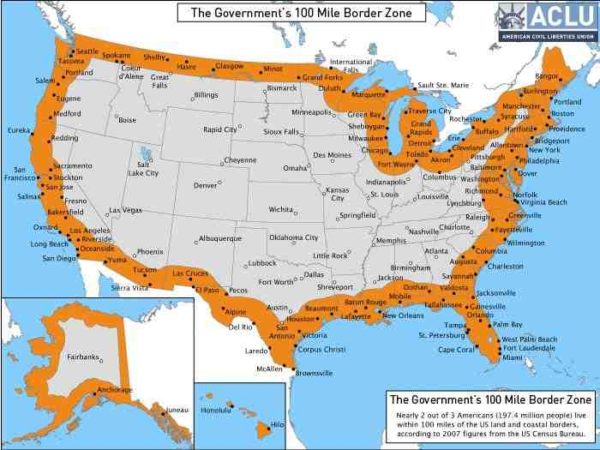 “Immigration police in this country are emboldened,” Gilles Bissonette, legal director of the ACLU of New Hampshire, said in a statement after 17 people were arrested during a Memorial Day weekend operation. “We’re seeing it not only nationally, but right here in New Hampshire.”

Government agents’ arbitrary checking of a person’s personal papers directly contradicts the entire letter and spirit of the Fourth Amendment of the United States Constitution, which guarantees that:

“The right of the people to be secure in their persons, houses, papers, and effects, against unreasonable searches and seizures, shall not be violated, and no Warrants shall issue, but upon probable cause, supported by Oath of affirmation, and particularly describing the place to be searched, and the persons or things to be seized.”

Customs and Border Protection says the U.S. Supreme Court has affirmed the agency’s ability to ask motorists’ citizenship status, even if they have no suspicion.

Here is the catch—while they are allowed to set up a checkpoint and ask questions, you are under no legal obligation to answer any of their questions.

If you should drive into one of these roadblocks, Border Patrol can ask you if you’re a citizen of the United States, but, you are not required answer the question, according to the ACLU. Nor are you required to consent to any searches.

It is important to note that while U.S. courts have generally legitimized the use of various types of random checkpoints, citizens are absolutely under no obligation to answer questions or cooperate with these “fishing expeditions.”

Effectively, Border Patrol checkpoints have become another tactic for the ever-expanding police state to stop law-abiding U.S. citizens—who are not suspected of any type of illegal activity—and question them, while simultaneously searching their vehicles for drugs using dogs.

To give you an idea of how these “citizenship checkpoints” are exploited by law enforcement, the New York Times reports:

Border Patrol agents closed off all southbound lanes of Interstate 95 north of Bangor, Me., stopping drivers, searching outside their cars with drug-sniffing dogs and refusing to let them pass until they disclosed their citizenship. At least one encounter was captured on cellphone video.

“Good afternoon, ma’am, U.S. Border Patrol immigration inspection,” an officer told two reporters with the Bangor Daily News who had heard about the checkpoint, about 80 miles from the Canadian border, and decided to drive to it and record their interaction. “What country are you a citizen of?”

The driver protested. “If you want to continue down the road, then yes, ma’am, we need to know what country you’re a citizen of,” the agent said.

The officer was blatantly lying, as an individual has no legal obligation to answer. Telling an innocent individual that unless they answer questions they cannot travel down an interstate, highway, or another type of road is clearly not in line with the principles this country was founded up—but par for the course in terms of how law enforcement operates in the real world.

Clearly, the assumption of innocence enshrined in our founding documents is no longer applicable when law-abiding drivers are being stopped at random law enforcement checkpoints and questioned—with no legitimate basis for the stop other than to inquire about a person’s citizenship status and engage in a fishing expedition to uncover possible criminal activity.

The fact that a law enforcement agency is setting up random checkpoints, over an area that contains two-thirds of all people in the country, effectively lays the groundwork for further encroachment on individuals’ civil rights and further entrenchment of an oppressive security apparatus.

Someone traveling down a highway to go to work, a friend’s house, to get groceries, etc. should never have to deal with being detained by law enforcement unless there is a reasonable suspicion of criminal activity afoot.

Two days after the House passed bipartisan legislation in a 419-3 vote codifying and imposing further sanctions against Russia, Iran and North Korea and preventing the president from acting unilaterally to remove certain sanctions on Russia, moments ago the Senate also overwhelmingly approved the measure in a 98-2 vote. Only Senators Rand Paul and Bernie Sanders Read More…

“Fortress balance sheets?”…  “It’s different this time”… “Greatest economy ever.” If all of that is true, then why are the stocks of the most systemically important banks in the world collapsing? And the banking collapse is leading global stocks lower – probably not coincidentally as global central bank balance sheets contract… As The Economic Collapse blog’s Read More…