With one week left in office, Obama’s Department of Justice has released a report effectively labeling the Chicago police department as nothing more than a bunch of racist, hate-mongering bullies who routinely resort to the use of “deadly force” in violation of the Fourth Amendment of the Constitution.

And while our characterization is probably somewhat more colorful than Attorney General Leretta Lynch would like, that Chicago Police are “racist” and “brutal” will nonetheless undoubtedly be the key takeaways from the press release and supporting documents posted earlier to the DOJ website.

The DOJ release begins by asserting that the Chicago Police Department routinely “engages in a pattern or practice of using force, including deadly force, in violation of the Fourth Amendment of the Constitution”…

The Justice Department announced today that it has found reasonable cause to believe that the Chicago Police Department (CPD) engages in a pattern or practice of using force, including deadly force, in violation of the Fourth Amendment of the Constitution.  The department found that CPD officers’ practices unnecessarily endanger themselves and result in unnecessary and avoidable uses of force.  The pattern or practice results from systemic deficiencies in training and accountability, including the failure to train officers in de-escalation and the failure to conduct meaningful investigations of uses of force.

The city of Chicago and the Justice Department have signed an agreement in principle to work together, with community input, to create a federal court-enforceable consent decree addressing the deficiencies found during the investigation.

“One of my highest priorities as Attorney General has been to ensure that every American enjoys police protection that is lawful, responsive, and transparent,” said Attorney General Loretta E. Lynch.  “Sadly, our thorough investigation into the Chicago Police Department found that far too many residents of this proud city have not received that kind of policing.  The resulting deficit in trust and accountability is not just bad for residents – it’s also bad for dedicated police officers trying to do their jobs safely and effectively.  With this announcement, we are laying the groundwork for the difficult but necessary work of building a stronger, safer, and more united Chicago for all who call it home.”

…then subsequently finds that their excessive use of force is applied in a “racially discriminatory” manner with the “pattern of unreasonable force falling heaviest on predominantly black and Latino neighborhoods.”

In addition, the department also identified serious concerns about the prevalence of racially discriminatory conduct by some CPD officers and the degree to which that conduct is tolerated and in some respects caused by deficiencies in CPD’s systems of training, supervision and accountability. The department’s findings further note that the impact of CPD’s pattern or practice of unreasonable force falls heaviest on predominantly black and Latino neighborhoods, such that restoring police-community trust will require remedies addressing both discriminatory conduct and the disproportionality of illegal and unconstitutional patterns of force on minority communities. 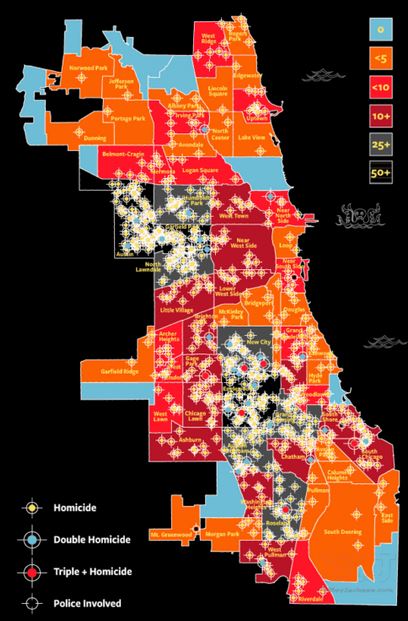 Of course, this entire exercise was undertaken by the Obama administration after a single incident involving the fatal shooting of a Chicago teen by a police officer in 2014. Per RT:

The DOJ launched the probe into the 12,000-officer force — one of the largest law enforcement agencies in the country – after a police video showing the fatal shooting of 17-year-old Laquan McDonald was released. The footage, which shows a white police officer firing 16 shots at a black teenager, caused public outcry and protests, and led to calls for an investigation.

The video contradicted the accounts given by Officer Jason Van Dyke, who was involved in shooting, and other police officers on the scene, who stated that McDonald had a small knife with its blade folded, and thus posed a threat to the officer’s life. Van Dyke was charged with first-degree murder on the same day the video came to light.

As we’ve pointed out before, efforts like this by the Attorney General of the United States to delegitimize Chicago’s Police force will ultimate only serve to exacerbate the surge in violence there.  As we pointed out back in August, many, including Thomas Abt, senior research fellow with the Harvard Kennedy School of Government, attribute Chicago’s historic rise in homicides in 2016 to criminals increasingly viewing the CPD as “illegitimate” and police officers’ reluctance to enforce the law out of fear of being the next cop to be publicly ridiculed by the mainstream media and put on trial for their efforts.

It is unclear what is driving the problem, but my own hunch – and it is still just a hunch at this point – involves a criminological phenomenon called legal cynicism. Multiple studies have demonstrated that, controlling for other factors, when communities view the police and criminal justice system as illegitimate, they become more violent. When people believe the system is unwilling or unable to help them, they are more likely to take the law into their own hands, creating the cycles of violent retribution that were chronicled so vividly last year in Jill Leovy’s Ghettoside.

In fact, just a couple of months ago we wrote about a case in which a female police officer was brutally beaten by a violent criminal but refused to pull her gun because she “didn’t want her family or the department to have to go through the scrutiny the next day on national news.”

And while this report from the Obama administration is not terribly surprising, it does beg the question of what other surprises he has in store for us in his last week in the White House.

Over the past week, Iran has been hit with series of protests, reportedly in relation to the country’s current economic climate. Where this particular narrative is headed is of major concern because of the current atmosphere in the Middle East and its deadly dynamics. Approximately two weeks ago, the truth about U.S. foreign policy was Read More…

By maintaining an ISIS pocket in the territory it occupies, the U.S. can continue to justify its illegal presence in the country for the long-term, ultimately substituting Iran for ISIS as its new regional boogeyman. NEW YORK — A recent report from the UN Security Council’s Sanctions Monitoring Team has found that many of the places in Syria Read More…

Though it probably comes as no surprise, a new report confirms the DEA systematically thwarted research into both cannabis and MDMA for medicinal use and potential rescheduling. Additionally, the Drug Policy Alliance and Multidisciplinary Association for Psychedelic Studies (MAPS) found in their report, the federal government maintains an “unjustifiable monopoly” on research-grade cannabis — preventing Read More…