After months of “smoking guns” and conspiracy theory dismissals, a Singapore-based Deutsche Bank trader (at the center of fraud allegations) finally confirmed (by admitting guilt) what many have suspected – the biggest banks in the world have conspired to rig precious metals markets.

The Deutsche Bank trader, David Liew, pleaded guilty in federal court in Chicago to conspiring to spoof gold, silver, platinum and palladium futures, according to court papers. Bloomberg notes that spoofing involves traders placing orders that they never intend to fill, in an attempt to manipulate the price.

Between in or around December 2009 and in or around February 2012 (the “Relevant Period”), in the Northern District of Illinois, Eastem Division, and elsewhere, defendant DAVID LIEW did knowingly and intentionally conspire and agree with other precious metals (gold, silver, platinum, and palladium) traders to: (a) knowingly execute, and attempt to execute, a scheme and artifice to defraud, and for obtaining money and property by means of materially false and fraudulent pretenses, representations, and promises, and in furtherance of the scheme and artifice to defraud, knowingly transmit, and cause to be transmitted, in interstate and foreign commerce, by means of wire communications, certain signs, signals and sounds, in violation of Title 18, United States Code, Section 1343,which scheme affected a financial institution; and (b) knowingly engage in trading, practice, and conduct, on and subject to the rules of the Chicago Mercantile Exchange (“CME”), that was, was of the character of, and was commonly known to the trade as, spoofing, that is, bidding or offering with the intent to cancel the bid or offer before execution, by causing to be transmitted to the CME precious metals futures contract orders that LIEW and his coconspirators intended to cancel before execution and not as part of any legitimate, good-faith attempt to execute any part of the orders, in violation of Title 7, United States Code, Sections 6c(a)(5)(C) and 13(a)(2); all in violation of Title 18, United States Code, Section 371.

Defendant LIEW’s employer, Bank A, was one of the largest global banking and financial services companies in the world. Bank A’s primary precious metals trading desks were located in the United States, the United Kingdom, and the Asia-Pacific region.

Defendant LIEW and other precious metals traders, including traders at Bank A, engaged in a conspiracy to commit wire fraud affecting a financial institution and spoofing, in the trading of precious metals futures contracts traded on the CME.

Defendant LIEW placed, and conspired to place, hundreds of orders to buy or to sell precious metals futures contracts that he intended to cancel and not to execute at the time he placed the orders (the “Spoof Orders”).

A common technique employed by defendant LIEW was to place and cancel one or more Spoof Orders on one side of the prevailing market price. The intent of these Spoof Orders was to facilitate the execution of an existing Primary Order on the opposite side of the market. By placing Spoof Orders opposite the Primary Order, LIEW intended to create a false appearance of supply or demand and induce other market participants to react to this false information in order to move the market price and/or increase the available quantity at the desired price of the relevant futures contract. During the time the Spoof Order was live in the market, or shortly after it was cancelled, LIEW’s Primary Order on the other side of the market would often execute at a more favorable price than was otherwise available before the Spoof Order had been placed.

During and in furtherance of the conspiracy, defendant LIEW engaged in solo spoofing or coordinated spoofing with traders at Bank A hundreds of times.

Prosecutors have brought very few cases against alleged spoofers but have stepped up their enforcement since the adoption of the Dodd-Frank financial law.

From a July 2012 blog post, we discover that Liew quit banking then to start a tech company…

A bit like Vinicius, I was (and still am) in my third year out of University and making a very comfortable living as a trader at Deutsche Bank. Here in Singapore (sadly), a sort of toxic culture has been brewing that your “success” is deemed by your salary. Yes, I was getting a 6 digit annual salary, yes I was in the top % of wage earners of my age group (I’m turning 27 this year). A lot of people have labelled me “crazy” to “throw all I had away”, to which I would reply “This is my life, not yours. But thanks and good luck to you too”

This is not the first time Deutsche Bank has been involved, implicated, and exposed to rigging the precious metals markets.

As we noted in December, when we first reported that Deutsche Bank had agreed to settle allegations it had rigged the silver market in exchange for $38 million, we revealed something stunning: “in a curious twist, the settlement letter revealed that the former members of the manipulation cartel have turned on each other,” and that Deutsche Bank would provide documents implicating other precious metals riggers. To wit:

“In addition to valuable monetary consideration, Deutsche Bank has also agreed to provide cooperation to plaintiffs, including the production of instant messages, and other electronic communications, as part of the settlement. In Plaintiff’s estimation, the cooperation to be provided by Deutsche Bank will substantially assist Plaintiffs in the prosecution of their claims against the non-settling defendants.”

Overnight we finally got a glimpse into what this “production” contained, and according to documents filed by the plaintiffs in the class action lawsuit, what Deutsche Bank provided as part of its settlement was nothing short of “smoking gun” proof that UBS Group AG, HSBC Holdings Plc, Bank of Nova Scotia and other firms rigged the silver market. The allegation, as Bloomberg first noted, came in a filing Wednesday in a Manhattan federal court lawsuit filed in 2014 by individuals and entities that bought or sold futures contracts.

In the document records surrendered by Deutsche Bank and presented below, traders and submitters were captured coordinating trades in advance of a daily phone call, manipulating the spot market for silver, conspiring to fix the spread on silver offered to customers and using illegal strategies to rig prices.

“Plaintiffs are now able to plead with direct, ‘smoking gun’ evidence,’ including secret electronic chats involving silver traders and submitters across a number of financial institutions, a multi-year, well-coordinated and wide-ranging conspiracy to rig the prices,” the plaintiffs said in their filing.

The latest evidence is critical because as the plaintiffs add, the new scheme “far surpasses the conspiracy alleged earlier.” As a result, the litigants are seeking permission to file a new complaint with the additional allegations, i.e., demand even more reparations from the defendants who have not yet settled, and perhaps even more evidence of ongoing market rigging. Their proposed complaint broadens the case beyond the four banks initially sued to include claims against units of Barclays Plc, BNP Paribas Fortis SA, Standard Chartered Plc and Bank of America Corp.

The Deutsche Bank documents show, among other things, how two UBS traders communicated directly with two Deutsche Bank traders and discussed ways to rig the market. The traders shared customer order-flow information, improperly triggered customer stop-loss orders, and engaged in practices such as spoofing, all meant to destabilize the price of silver ahead of the fix and result in forced selling or buying. It is also what has led on so many occasions to the infamous previous metals “slam,” when out of nowhere billions in notional contracts emerge, usually with the intent to sell, to halt any upside moment in the precious metals.

“UBS was the third-largest market maker in the silver spot market and could directly influence the prices of silver financial instruments based on the sheer volume of silver it traded,” the plaintiffs allege. “Conspiring with other large market makers, like Deutsche Bank and HSBC, only increased UBS’s ability to influence the market.”

Some examples of the chats quoted are shown below. In the first example a chart between DB and HSBC traders in which one HSBC trader says “really wanna sel sil[ver” to which the other trader says “Let’s go and smash it together.”

Another chat transcript from May 11, 2011 reveals a Deutsche Bank trader telling a UBS trader that the cartel “WERE THE SILVER MARKET”(sic) based on feedback from outside traders to which UBS replies, referring to the silver market “we smashed it good”, leading to the following lament “fking hell UBS now u make me regret not joining.” 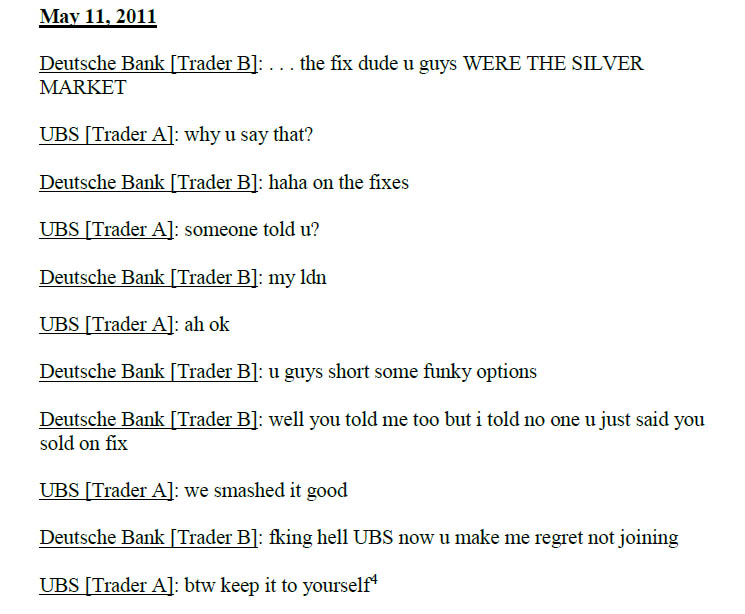 Finally, for all those traders who wonder what happened to their stops as a result of dramatic moves in the price, here is the answer: a June 2011 chat between a UBS and a DB trader comes down to the following: “if you have stops… who ya gonna call… STOP BUSTERS” 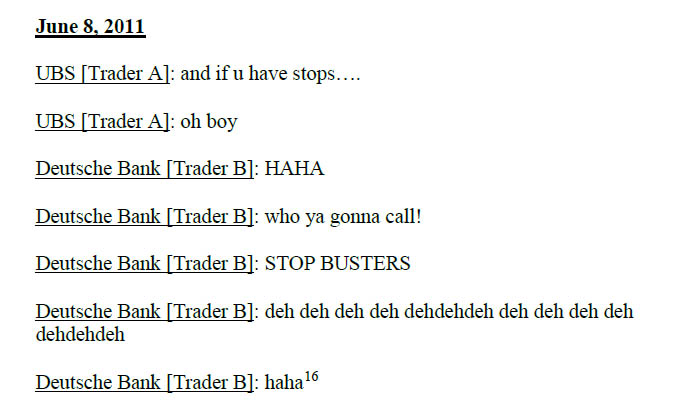 Liew’s admission of guilt to a conspiracy to spoof precious metals markets seems like the final nail in the coffin of any conspiracy theory deniers – theory is now fact once again. The question is – will the regulatory crackdown on these manipulations actually reduce rigging in the markets?

US President Donald Trump made his first weekly address to the nation on Saturday, outlining the smorgasbord of actions he has taken in his first week… As AP reports, In it, Trump said he had met the leaders of some of the country’s top manufacturing companies and labour unions and told them that he wanted Read More…

Rubio Calls For “Widespread Unrest” In Venezuela, US Pays $1B For Saudi Defense & Manning Imprisoned

Welcome to The Daily Wrap Up, a concise show dedicated to bringing you the most relevant independent news, as we see it, from the last 24 hours (3/8/19). As always, take the information discussed in the video below and research it for yourself, and come to your own conclusions. Anyone telling you what the truth Read More…

It is already legal for the mainstream media to broadcast “fake news” propaganda for the US government—how will that increase with advancements in artificial intelligence technology? (TFTP) Advancements in artificial intelligence and computer-generated imagery are creating new concerns about what the definition of “fake news” could become once mainstream media outlets get ahold of the Read More…