Three hooded figures dressed in black broke into the Madrid office of WikiLeaks lawyer Baltasar Garzon at dawn on Monday morning, in what police are describing as a “very professional” operation they are treating as an attempted robbery, according to Spain’s largest newspaper, El País. Garzon heads Assange’s legal defense, in particular working to avoid extradition to Sweden and preparing to face charges thought to be pending by U.S. authorities.

The intruders covered security cameras with tape, and there were no signs that anything was taken – however police are analyzing Garzon’s computer equipment to determine whether or not any files were taken or copied. “They have not taken what they have been looking for,” Garzon told El Periodico, and told Ser magazine that his clients’ security “has not been affected,” and that the people “acted very quickly.”

WikiLeaks tweeted the article from El País, which was followed 90 minutes later by a tweet from Assange regarding the break-in.

Hours after the break-in, and shortly before WikiLeaks tweeted the original article from El País, Julian Assange called a Jimmy Dore video “Brilliant” which prominently features Assange’s interview with a Dutch television host in which the WikiLeaks founder all but used sign language to indicate slain DNC Seth Rich was his source.  (Assange clip at 21:30)

In the video Assange calls “Brilliant,” Dore opines that the Obama administration was evil. “What we did in Libya, Iraq, Guantanamo, black ops sites,” was evil. Dore mentions the torture report, increased weapons sales to the Saudis under Clinton, chemical weapons the United States sold Iraq.”

“Those weren’t the evil days?” Dore asks, adding “We’ve created millions of refugees because Barack Obama bombed the shit out of them (and Trump continues to best even Obama in this regard) but people are mad because Trump wants to block them at the airport?”

Next Dore goes after the MSM – calling MSNBC’s Chuck Todd a “tool of the establishment,” who after suggesting Donna Brazile was a “dupe of the Russians,” Dore exclaims: “And now you know why that guy didn’t graduate college.”

Dore then goes into the DNC server hack investigation – noting that the FBI never looked at the allegedly hacked servers, and relied on a report from cybersecurity firm CrowdStrike, while subsequent forensic analysis revealed that the hacked files were transferred at 23 MB/s – about the speed a computer transfers files to a thumb drive, making makes a hack over the internet highly unlikely. Dore then segues into a Dutch TV interview with Julian Assange in which he heavily implies Seth Rich was WikiLeaks’ source. 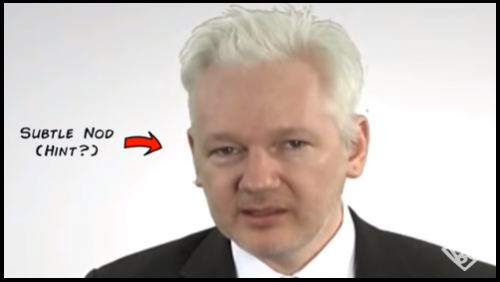 “The WikiLeaks, Julian Assange, I saw with my own eyes intimate on an interview that the person who did that download… …he intimated that their source couldn’t have been Seth Rich. ”

“My question to you on this is not whether it was Seth Rich or not, why are we not allowed to ask that question without being called a kook?”

The rest of the Dore video continues to skewer the MSM for stoking Russophobia with terrible propaganda, and destroys the Russian collusion narrative – bringing up the fact that the “Trump-Russia” dossier was paid for by Hillary Clinton and the DNC, and created by former MI6 spy Christopher Steele with the assistance of high level Russian government officials.

WikiLeaks revealed in 2015 an internal Clinton campaign poll suggested that her biggest vulnerability was the Uranium One deal (30 minutes into video), and that Robby Mook and John Podesta cooked up the Russia narrative. Dore then points out that John Podesta now works for the CIA-linked Washington Post, and how short-lived Trump campaign manager Paul Manafort funneled money to the Podesta Group, run by Tony Podesta – who Dore suspects will be charged soon.

Between WikiLeaks attorney Baltasar Garzon’s ‘professional’ office raid and Assange’s subsequent tweet, it’s clear that the cloak and dagger war over intelligence, narratives and Julian Assange is as hot as ever.

What You Need To Know About The Science Behind Food Studies

Every week, it seems like a new study throws what we know about nutrition into shambles. It only gets more confusing if these findings contradict long-held beliefs, or even if it opposes research that was just done the previous month. One day you might read about how coffee is found to be good for your health, and Read More…

Thinking About Voting? Read This First

Colin Kaepernick has been abstaining from standing for the national anthem. Self-styled patriots have been losing their minds over it. That is because they are true believers in a cult. The cult is the State. All states are cults: religions. And like all religions, states have sacraments, including holy rituals. The national anthem is one Read More…

Vote Nobody: Lead Yourself 2016

All throughout history, the masses have been programmed to think that if they want to change anything in this world, the democratic right to vote is their best solution. The premise is that people get the privilege of voting in representatives who will enact the kinds of legislation that their supporters want to see happen. Read More…