A new UN report has found that two billion people around the world do not have access to clean drinking water. However, the report covers just a small part of the global population and fails to address the impact that war and corporate profiteering have had on drinking water access.

The report, titled “Progress on Drinking Water, Sanitation and Hygiene,” found that while some countries have made significant progress in providing access to drinking water for their citizens, the quality of that water still falls short. And despite recent progress, as many as 400 million people still depend on distant water sources, while 159 million others still rely on untreated water from lakes and streams. Global sanitation issues were also addressed in the report, including open defecation, which has dropped from 20 percent in 2000 to less than 12 percent currently.

However, the data used in drafting the report only covers a fraction of the global population, suggesting that the actual number of people lacking access to clean drinking water is likely much higher. According to Al-Hassan Adam, international coordinator at End Water Poverty, the current data used in the report “only reflects 35 percent of the global population across 92 countries. Big countries like China and India have been left out.”

In addition to the massive gap in its data set, the report also fails to note several leading factors that have caused many communities throughout the world – in both developed and developing nations – to struggle to gain access to safe drinking water.

For instance, the effects of war were hardly mentioned in the report, despite the effect it has had on drinking water access in several countries. In Yemen, the Saudi-led Coalition’s repeated bombing of civilian infrastructure has made access to clean, safe drinking water difficult for a significant part of the population, helping to feed a cholera epidemic that is now believed to be the worst in recorded history. Yemen’s case is not an issue of “development,” but rather the war crimes committed against it.

The current situation in Gaza is similar, as Israel and Egypt’s illegal blockade of the coastal enclave, as well as their ongoing war efforts, have damaged infrastructure, while current reductions in electricity from Israel have made it impossible to maintain running water and keep sewage treatment facilities in operation. However, these war crimes are not mentioned in the UN report. 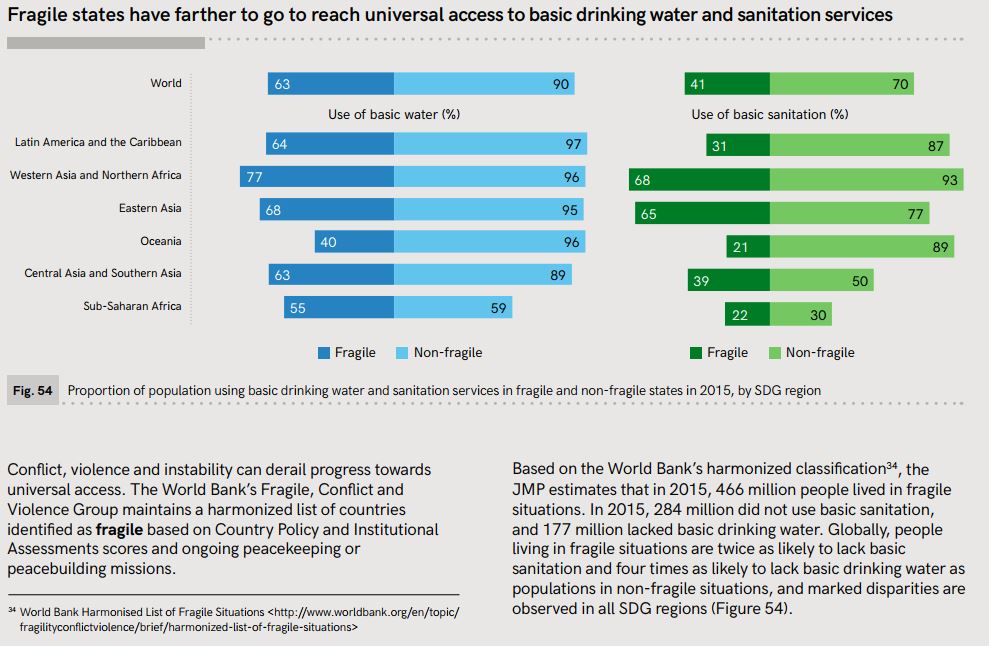 Another factor ignored in the UN report is the contamination of drinking water sources by irresponsible corporations. In some nations, a lack of corporate accountability has made access to clean water unattainable for millions. In China, factories often dispose of toxic waste directly into rivers with impunity. As a result, more than 80 percent of the entire country’s groundwater is polluted with contaminants such as heavy metals and perchlorate, a precursor to rocket fuel. Water pollution by corporations has been a major issue in India as well, with Coca-Cola being a major offender.

In other cases, corporations have stolen drinking water directly from communities. In Colombia, the government approved the construction of a massive dam in 2011 that diverted the only water source of its largest indigenous community to the continent’s largest coal mine, which consumes 17 million liters of water every day.

The tribal community has been forced to subsist on less than 0.7 liters of water per day per person. However, that water is often heavily contaminated with bacteria and salt, which has made severe diarrhea and cholera common throughout the community. As a result, some 14,000 children are believed to have died since the dam was built just five years ago.

While developing nations are the focus of the UN report, some developed nations are struggling with safe, clean drinking water as well, particularly the United States. For instance, the shale boom has led to widespread contamination of drinking water in areas where gas is extracted via hydraulic fracturing, or “fracking.”

In California, the gas industry was found to have illegally injected 3 billion gallons of fracking wastewater, known to contain carcinogens, directly into aquifers that supply drinking water and water for farm irrigation. Complaints of contaminated water elsewhere are rampant, with many families saying they are able to light their tap water on fire. But these complaints often go unrecognized at the state and federal level.

Even treated and “safe” water in the United States has been found to be contaminated. For instance, perchlorate has been found in breast and cow’s milk throughout the country, having been transmitted to both humans and cows via contaminated drinking water. Other harmful contaminants, such as lead, have been found in dangerous levels, particularly in schools, across the country – not just in Flint, Michigan. A report last year estimated that as many as 18 million Americans are drinking water with higher levels of lead than is federally permitted.

While the UN report may be a good starting point in addressing the critical issue of global access to clean drinking water, it may barely scratch the surface of a much more severe problem – one that links corporatism, imperialism and modern day colonialism to this issue.

Read the UN’s full report below:

Despite Attempts to Shut It Down, Pizzagate Is a Worldwide Citizen Investigation Now

The mainstream media is in damage control mode over this, now claiming that Pizzagate stories are “fake news” to try and further shut it down. Unfortunately for the cockroaches, this story is not going away and is only getting bigger and gaining more independent investigators around the world… it’s global now. While the NY Times Read More…

US officials don’t seem to agree on if President Trump even read his new National Security Strategy, as presented Monday, but someone definitely gave him the gist of it. Either way, China and Russia have had a look at it, and are none too happy. Both nations issued statements Tuesday decrying the new strategy as having a Read More…

The media, Congress, and the American people continue to fix to their attention on Brett Kavanaugh and today’s hearings regarding allegations of sexual assault and harassment against him. While these are serious issues and should not be taken lightly, there are numerous other developments that are falling by the wayside as the national conversation remains preoccupied Read More…