The wealth management division of Bank of America failed to report more than 68 million derivatives transactions dating all the way back to 2014. It had already been forced to pay $20 million in 2015 for an earlier offense. Despite major players throughout the financial industry paying a total of over $350 billion in fines since the 2008 crisis, those same institutions are still thriving and have amassed more than a $1 trillion in profits.

The current penalties amount to little more than a slap on the wrist for these megabanks and have become a normal part of doing business. It’s no surprise that the same reckless behavior that helped lead to the Great Recession is still rampant. The global derivatives market was reportedly as large as $1.5 quadrillion in 2016, and things haven’t improved much since then. Collusion between large financial institutions, central banks, and governments around the world has fostered an environment with almost zero accountability. Hopefully, as more people become educated about the possible dangers associated with complex financial derivatives, it will be easier to prevent wild speculation like what is seen today.

Derivatives are one of the most complex and least understood financial instruments. Instead of establishing their value through a share of a company’s profits or a future dividend, derivatives are essentially side bets made between third parties. Commodity futures contracts are an example of a simple derivative. Farmers have used them to protect themselves against price changes that could significantly impact their businesses from season to season.

However, these financial tools aren’t just limited to hard assets and can be used to speculate on every industry, asset, and currency in the world financial system. The growing attention from regulators on the derivatives market may uncover what many investors and economists previously warned about. In 2003, Warren Buffett infamously classified derivatives as ‘weapons of mass destruction’ and ‘time-bombs.’

He doubled down on the assertion during a more recent interview, saying:

“At some point they are likely to cause big trouble…Derivatives lend themselves to huge amounts of speculation…The problem arises when there is a discontinuity in the market for some reason or another…When the markets closed like it was for a few days after 9/11 or in World War I the market was closed for four or five months – anything that disrupts the continuity of the market when you have trillions of dollars of nominal amounts outstanding and no ability to settle up and who knows what happens when the market reopens.” 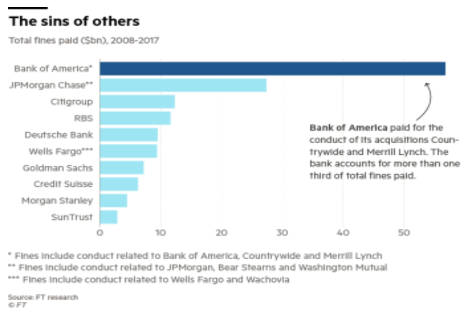 Merrill Lynch and Bank of America haven’t been the only ones prosecuted over their derivatives exposure and practices. Deutsche Bank is poised to lose $60 billion for using currency derivatives to speculate on U.S. inflation rates, the ‘London Whale’ scandal ended up costing JPMorgan $920 million, and just a month ago, Citi was ordered to close $2 billion worth of derivatives taken over during the collapse of Lehman Brothers. These potentials for volatile swings in market valuations can quickly undermine the solvency of institutions that hold a majority of the pensions, savings accounts, and retirement funds for the public. 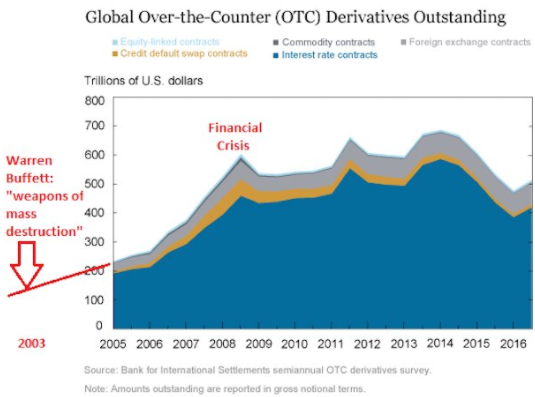 The first overview report on the E.U. derivatives market was just published by the Europe Security and Markets Authority. It found that the nominal value of derivative holdings within the European Union was valued at $536 trillion. London alone handles nearly 40% of all interest-rate derivative trades for the European Union, and uncertainty continues to grow about the impact Brexit will have on the strength of major European banks.

Confidence in the current system seems to be eroding with each failed promise and debt crisis. If faith in central planning is shaken again like in 2008, the result could impact the daily lives of almost everyone. The once responsible stewards of the public’s wealth have been corrupted by power, greed, and self-preservation. The that have been perpetually fined trivial amounts by inept regulators will continue to make trillions while the savers and retirees suffer as a result.

Guamanians, Voiceless And Exploited US Citizens, Now In Bomb-Sights Of North Korea

With North Korea and the U.S. dramatically amping up the nuclear saber-rattling, the Pacific island of Guam, long a U.S. military outpost, suddenly finds itself under threat of attack. Its history is one of exploitation and mistreatment under more than a century of U.S. control. GUAM — Tensions rose yet again earlier this week between North Read More…

Glyphosate Found In Most Vaccines

Research scientist Anthony Samsel has confirmed that glyphosate, a key active chemical in Monsanto’s herbicide Roundup®, has been found in most vaccines. In this video, we hear Dr Samsel reciting his findings. Additionally, Dr Samsel sent a letter to his Congressional Senator from New Hampshire wherein he gives Senator Shaheen permission to share his laboratory Read More…

Translated from the Spanish by Global Research.  “A confession from [America’s] puppet pointing to evidence,” said journalist Gustavo Villapol Wednesday, noting that the deputy of the National Assembly in contempt Juan Guaidó confessed to be behind the attacks perpetrated against the National Electric Service (SEN) that have affected the Venezuelan people since last March 7.   “The Read More…