It wasn’t just the EPA.

Earlier today, it was reported that the Trump administration instituted a media blackout at the Environmental Protection Agency and barred staff from awarding any new contracts or grants.

Emails sent to EPA staff since President Donald Trump’s inauguration on Friday and reviewed by The Associated Press, detailed the specific prohibitions banning press releases, blog updates or posts to the agency’s social media accounts. On Monday, the Huffington Post reported that EPA grants had been frozen, with agency employees barred from speaking of the matter.  The memo ordering the social media blackout is shown below. 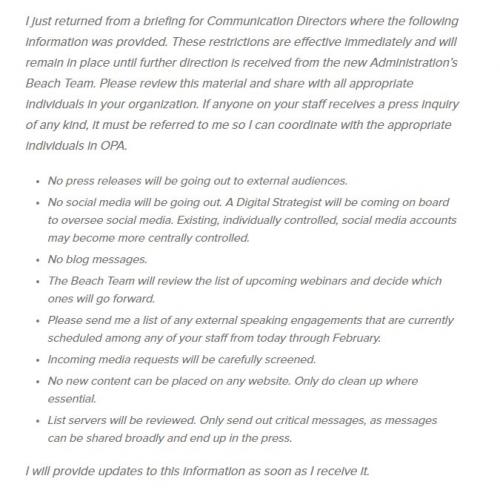 Cited by The Hill, Myron Ebell, who leads the Trump EPA transition, confirmed the freeze to ProPublica. “They’re trying to freeze things to make sure nothing happens they don’t want to have happen, so any regulations going forward, contracts, grants, hires, they want to make sure to look at them first,” Ebell told ProPublica. Trump’s pick for EPA director, Oklahoma Attorney General Scott Pruitt, has frequently challenged agency policy in court.

The Trump administration reportedly told the Department of the Interior to stop tweeting from its accounts over the weekend after the National Park Service’s Twitter account retweeted a post about the crowd sizes at Trump’s inauguration Friday. The agency brought back its accounts on Saturday.

Asked if the EPA had been gagged, White House press secretary Sean Spicer said on Tuesday: “I don’t know … we’re looking into it … I don’t think it’s a surprise we’re going to review the policies but I don’t have any info at this time.”

According to Reuters sources, the move “reinforced concerns that Trump, a climate change doubter, could seek to sideline scientific research showing that carbon dioxide emissions from burning fossil fuels contributes to global warming, as well as the career staffers at the agencies that conduct much of this research.”

The agency also was asked by the White House on Monday to temporarily halt all contracts, grants and interagency agreements pending a review, according to multiple sources. The EPA awards billions of dollars worth of grants and contracts every year to support programs around environmental testing, cleanups and research. According to Reuters,
the White House sent a letter to the EPA’s Office of Administration and Resources Management ordering the freeze on Monday. “Basically no money moving anywhere until they can take a look,” the staffer said, asking not to be named.

Now, as Reuters adds, other agencies were also impacted, and the Trump’s administration has put staff at a slew of government agencies on notice – “be careful what you say.”

In addition to the EPA, the Interior Department and the U.S. Department of Agriculture also has seen efforts to curb communication. On Monday, staff at the department’s Agricultural Research Service (ARS) were asked in an email to suspend the release of “any public-facing documents.”

“This includes, but is not limited to, news releases, photos, fact sheets, news feeds, and social media content,” the email said.

The U.S. Department of Agriculture disavowed the email on Tuesday, saying in a statement that it was released without “departmental direction and prior to departmental guidance being issued.”

“ARS will be providing updated direction to its staff,” according to the statement.

The ARS focuses on scientific research into the main issues facing agriculture, including long-term climate change.

Last week, staff at the Interior Department were told to stop posting on Twitter after an employee retweeted posts about the relatively low attendance at Trump’s inauguration, and about how the issues of climate change and civil rights had disappeared from the White House website.

The department has since resumed tweeting.

Welcome to The Daily Wrap Up, a concise show dedicated to bringing you the most relevant independent news, as we see it, from the last 24 hours (12/4/20). As always, take the information discussed in the video below and research it for yourself, and come to your own conclusions. Anyone telling you what the truth Read More…

Having disappeared from the public scene for almost a month (with the occasional backwood spotting thrown in for dramatic effect), today Hillary Clinton reemerged from a self-imposed social quarantine, and in a exquisitely choreographed Podesta special, addressed the nation from Capitol Hill. What was first and foremost on the mind of person who the “impartial” Read More…