Things aren’t looking great for the Democratic establishment, which recently admitted that it stacks its primaries against progressive candidates and is currently engaged in a desperate, hail Mary lawsuit against WikiLeaks for its factual publications about the party. So of course you know what that means.

Jill Stein is on @NewDay right now repeating Russian talking points on its interference in the 2016 election and on US foreign policy.

“Jill Stein is on @NewDay right now repeating Russian talking points on its interference in the 2016 election and on US foreign policy,” tweeted CNN Chief National Security Correspondent Jim Sciutto today, without shame or self-reflection.

Sciutto was referring to comments Stein made on a CNN interview today about America’s undeniable, entirely factual and well-documented history of meddling in other countries’ elections, including a citation of an ex-CIA Director’s recent admission that the US has interfered in foreign electoral processes and continues to do so to this day.

Stein’s interviewer, Chris “It’s illegal to read WikiLeaks” Cuomo, echoed a similar sentiment in response to her points, in essence arguing that only Russians should be stating these blatantly obvious and extremely relevant facts.

“You know, that would be the case for Russia to make, not from the American perspective,” Cuomo said. “Of course, there’s hypocrisy involved, lots of different big state actors do lots of things that they may not want people to know about. But let Russia say that the United States did it to us, and here’s how they did it, so this is fair play. From the American perspective and you running for president, more than once of this country, shouldn’t your position have been, this was bad what they did, they’re trying to do it right now and we have to stop it?”

Right. Because you have so many Russians on your show making that case, do you Chris?

This is absolute lunacy. The implication here is that it isn’t ever okay for Americans to talk about Russia in any other context than how awful and evil its government is; that nobody can speak about how America’s behavior factors into the equation in a very real and significant way. Not because it’s not factual, not because it’s not relevant, but because it’s a “Russian talking point,” and only Russians should be saying it.

And this sentiment being promulgated by these establishment pundits is being swallowed hook, line and sinker by the rank-and-file citizenry who consume such media. Every single day, without exception, I am accused multiple times of being a propagandist for the Kremlin. Not because there’s any evidence for that, not because I’m writing anything that is untruthful, but because I’m writing “Russian talking points,” i.e. arguments that have ostensibly been made at some point by Russians.

And it is, to be perfectly honest, infuriating. These people are actively making the case for willful ignorance and stupidity. They’re actively arguing that facts which don’t support the narratives being promulgated by the CIA and the State Department should be completely excluded from all discussion within the western hemisphere, and that only Russians should be making them. They do this while simultaneously arguing that Russian media is dangerous and should be avoided by Americans. Only Russians should argue against CIA/CNN narratives, and we should never, ever listen to those arguments.

They’re arguing for the deliberate omission of relevant facts from dialogue. They are arguing that we should all be morons, on purpose.

Of course it’s relevant to the discussion that the US interferes with foreign democratic processes far more than any other government on the planet! Are you nuts? Yes, obviously if yours is the primary country responsible creating a climate wherein governments meddle in the elections of other nations, that undeniable fact must necessarily be a part of any sensible analysis of what’s happening and what should be done about it. Anyone who tries to argue that that fact shouldn’t be a part of the conversation is making an argument in favor of stupidity.

pressed on Russia election interference, Jill Stein on CNN opts for Russian wahtaboutism–America does it too, and even worse!!

The environment that these pundits are creating is itself hostile to democracy. If all “talking points” are excluded from the conversation other than those which lead to continually escalating sanctions, proxy wars, nuclear posturing and brinkmanship, then there’s no way for activism or democracy to tap the brake on the west’s ongoing trajectory toward direct military confrontation with a nuclear superpower.

In her interview, Stein outlined this quite clearly:

“You know, I think that kind of position which says that we’re in a totally different category from the rest of the world is not working. This century of American domination, you know, sort of didn’t play out the way we thought it would, we’re embroiled now — we have the military in practically every country around the world. In the recent taxes that people pay, the average American paid almost $3,500 that went into the Department of Offense, I would call it, not the Department of Defense, $3,500, whereas we put $40 into the EPA.

“You know, 57 percent of our discretionary dollars now are going into the military. It’s part of a mindset that says, we’re always right and they’re always wrong and we’re going to be dominating militarily and economically. We’re in a multi-polar world right now and, you know, we need to behave as an exemplary member of the community and that is by upholding ourselves and leading the way on international law, human rights and diplomacy. That approach is really paying off on the Korean peninsula right now. I think we should be using it more broadly.”

Cuomo, who as the son of a New York Governor and brother of the current New York Governor is as much Democratic Party royalty as a Clinton, had some very interesting facial expressions in response to Stein’s arguments. Whenever an interviewee makes strong points which go against the establishment grain he always looks like he’s taking a really uncomfortable shit: 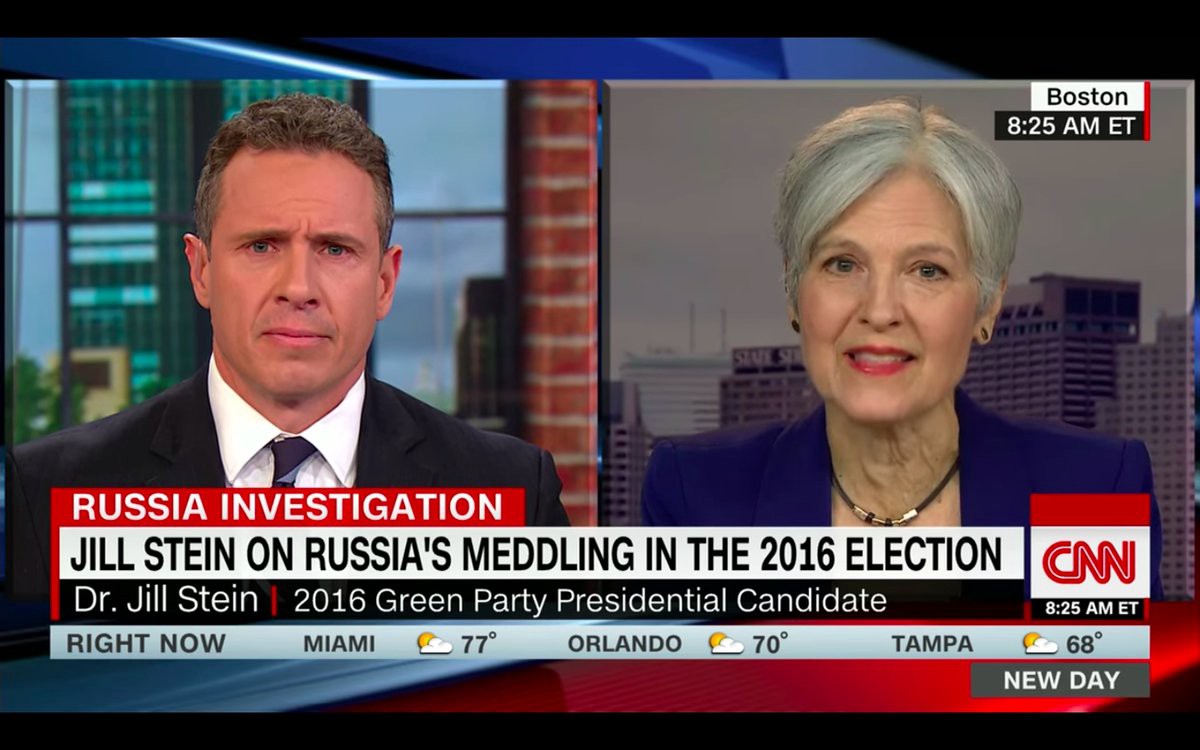 There have been far too many cartoonishly absurd responses to Stein’s interview for me to address in a single article without putting my laptop through the wall in a fit of rage, but this tweet from MSNBC and Atlantic contributor Natasha Bertrand is really something else.

“Jill Stein just told @CNN that her presence at RT gala in Moscow Dec 2015 wasn’t controversial at the time because Obama ‘was still on track for a reboot’ with Putin,” said Bertrand, adding that “Russia had already annexed Crimea, invaded eastern Ukraine, intervened in Syria for Assad, and hacked the DNC.”

This is actual, real-life “Oceania had always been at war with Eastasia” Orwellian revisionist doublethink. There was no public information about any Russian DNC hack in 2015, and the average American hardly ever thought about Russia at that time. Then-Secretary of State John Kerry personally met with Vladimir Putin in July of 2016 to discuss collaboration against terrorist forces in Syria. Only in the most warped, revisionist, funhouse mirror Orwellian reality tunnel can it be claimed that Stein visiting Moscow in December of 2015 would have been considered shady or controversial at the time.

Jill Stein just told @CNN that her presence at RT gala in Moscow Dec 2015 wasn’t controversial at the time because Obama “was still on track for a reboot” with Putin.
(Russia had already annexed Crimea, invaded eastern Ukraine, intervened in Syria for Assad, and hacked the DNC.)

You know damn well the average American hardly ever thought about Russia until the end of 2016 when you pundits started shrieking about it. Stop this psychotic historic revisionism. https://t.co/HIsN7czROx

The fact that Bertrand’s tweet was liked and shared thousands of times on Twitter is extremely creepy and disturbing. Establishment media didn’t start indoctrinating American liberals with Russia hysteria until the tail end of 2016, but it’s been so effective that MSNBC mainliners are now gaslighting themselves into a revision of their own history.

This is why people like myself fight the CIA/CNN Russia narrative so aggressively. Not because we’re propagandists, not because we’re “useful idiots,” not because of “Russian talking points,” but because the US-centralized power establishment’s nonstop campaign to manufacture support for its agendas of global hegemony are making us all stupid and crazy.

Tips On How To Wake People Up

There are many things we can do to bring about change in this world; however, waking people up seems to be at the forefront of it all. There is no way that the people can bring about a big enough movement that goes after the right causes without awakening people to true knowledge. This is an Read More…

Welcome to The Daily Wrap Up, a concise show dedicated to bringing you the most relevant independent news, as we see it, from the last 24 hours (2/21/18). Just as I warned, and as we have seen so many times in the past, the recent shooting has completely eclipsed all else. The faint idea of Read More…