The avalanche of revelations about the perverted and predatory sexual underbelly of Hollywood and the entertainment industry is long overdue. It has always been an open secret of sorts, but the whole house is coming down right now as more people are suddenly feeling empowered to speak out, and the media is finally ready to listen and take seriously to the stories of victims.

But what if pedophilia and the sexual harassment of women in entertainment is only a symptom and not actually the disease?

Just below the surface, hidden in plain sight in Hollywood is the overwhelming influence of the occult and the esoteric schools of ancient black magic. It has always been present in this industry because those who seek power in our world have long recognized that television, film and music are the most efficient and important roadways into the public psyche and the collective conscience.

Many have warned us about this for years, composing volumes of books and videos, gathering evidence of this bizarre conspiracy.

“Hollywood is, as David Lynch titles it, an “inland empire” – a kind of covenantal city-state of its own, with its own religion, including all the trappings of neophytes, acolytes, servants, agents, star saints, hierophants and hierarchs and holy sites.  It is a veritable polis of initiatory esoterica where the holy sites and rites of Hollywood are not the altars of mainstream religion, but another ancient religion, ultimately summed up in the epithet of the ancient mysteries.  The ancient mysteries comprise the competing religious practices of the empires of old, but the one empire that seems to have achieved the most appropriate association with Hollywood is Babylon – the “gate of the gods”.” ~Jay Dyer

Clues appear in the form of symbols and the use of symbolic set and setting in order to introduce occult memes into the subconscious. Subliminal messages packed with sexual innuendo including veiled pornographic images and reproductive anatomy are vaguely concealed in films. Music videos are laden with satanic imagery and overtly demonic themes.

Here is a compilation of examples of this in many of Disney’s children’s films:

Here is a compilation of Illuminati and satanic symbols appearing in music videos. There are hundreds of more examples of this that are quite easy to find.

Illuminati symbolism is a recurring theme, often resurfacing as the chosen celebrity covering one eye. The symbol of the one eye is of course the same single eye that watches from atop the symbolic pyramid, a symbol on our money and scattered throughout the political world.

There are so many instances of actors, musicians and pop stars being photographed with one eye covered that it defies the definition of coincidence. Here is a collage with just a tiny fraction of available examples. 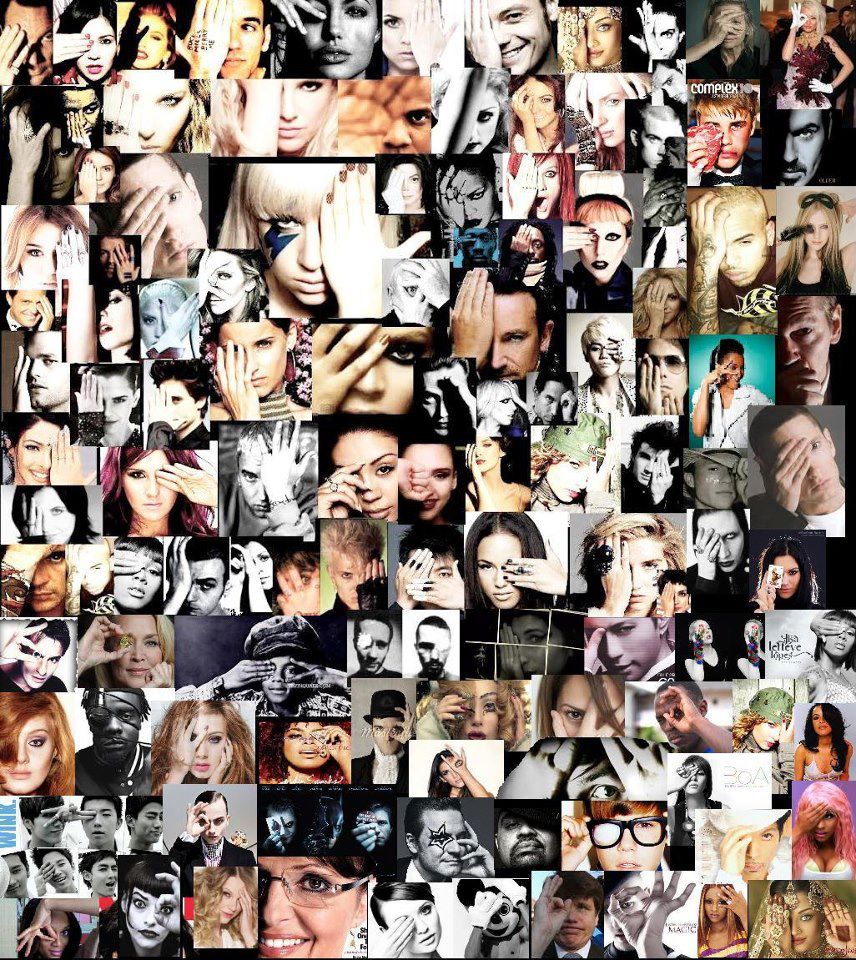 Hollywood has its own hidden language that is stunningly pervasive in entertainment media, with recurring themes applied over again in new contexts. There is so much to it that it cannot be ignored, but you don’t see it until you’ve been introduced to it. Once you see, though, you see it everywhere.

The themes are applied in so many productions that it utterly defies coincidence, which suggests that there must be some greater unifying message or purpose to it all. Based on the type of symbols and when looked at in the historical context of esoteric religious movement, Egyptian theology, Babylonian mythology, Satan worship and so on, Hollywood and the movie industry are clearly working to serve a particular ideological movement.

The worship of dark and satanic forces has historically been linked to human sacrifice, pedophilia, sexual perversion, ego worship, celebrity worship, fragmentation of the individual psyche into controllable parts, mind control and corruption of the soul. The use of the occult and its symbols is a methodology employed to weaken the power of the individual and to create psychological slaves. It is a serious form of mind control.

While there certainly is reason to applaud the growing tidal wave of truth about Hollywood, one can only hope that these revelations ultimately go all the way to the core of the depravity in Hollywood, and that we can finally liberate our culture from these dark influences.

Buck Rogers
Buck Rogers is the earth-bound incarnation of that familiar part of our timeless cosmic selves, the rebel within. He is a surfer of ideals and meditates often on the promise of happiness in a world battered by the angry seas of human thoughtlessness.
http://www.wakingtimes.com/category/contributors/buck-rogers/

In an extraordinary 11-page written testament, one which the NYT’s Ross Douthat called a “truly historic bombshell”, a former papal nunco, or Vatican ambassador, to the US, it does what many have called for, and offers testimony concerning “who in the hierarchy knew what, and when,” about the crimes of Cardinal McCarrick. The testimony implicates Read More…

Most Americans believe that we have a reasonably fair justice system with scholarly judges at the helm. Well, how about a federal judge who suspends the Constitution, confiscates all of a litigant’s assets, orders him not to hire defense counsel, and pronounces his orders enforceable by death?  That’s exactly what federal Judge Royal Furgeson did Read More…

Troy, 12th century BC. The Greeks’ decade-long siege of Troy is drawing to a close. The cunning Odysseus has hit upon a plan to subvert the Trojans’ defenses. The Greeks build a giant wooden horse and then pretend to sail away, leaving the horse at the gates of Troy as an apparent offering to the Read More…