In the latest ongoing WikiLeaks whistleblowing scandal, the website has published documents from the CIA’s CherryBlossom project, exposing agency’s exploitation of Wi-Fi device security vulnerabilities. Released on Thursday, the new batch of CIA classified documents comes from the Vault 7 project.

In a press release, WikiLeaks said: “Today, June 15th 2017, WikiLeaks publishes documents from the CherryBlossom project of the CIA that was developed and implemented with the help of the US nonprofit Stanford Research Institute (SRI International).”

CherryBlossom monitors the Internet activity of, and performs software exploits on, targets of interest. According to the press release:

In particular, CherryBlossom is focused on compromising wireless networking devices, such as wireless routers and access points (APs), to achieve these goals. Such Wi-Fi devices are commonly used as part of the Internet infrastructure in private homes, public spaces (bars, hotels or airports), small and medium sized companies as well as enterprise offices. Therefore these devices are the ideal spot for “Man-In-The-Middle” attacks, as they can easily monitor, control and manipulate the Internet traffic of connected users.

The devices work by compromising the data stream between the user and Internet services. The end result is control and manipulation of router user traffic.

According to WikiLeaks, CherryBlossom has been infecting Wi-Fi routers of D-Link, Belkin, and Linskys companies for years.

To implant the customized CherryBlossom firmware on a wireless device, no physical access is required, making the operation dangerously stealthy. This is because some devices allow their firmware to be upgraded over a wireless link.

The new firmware on the device can be used to ignite the router into a “FlyTrap,” which can scan for “email addresses, chat usernames, MAC addresses and VoIP numbers” in passing network traffic. 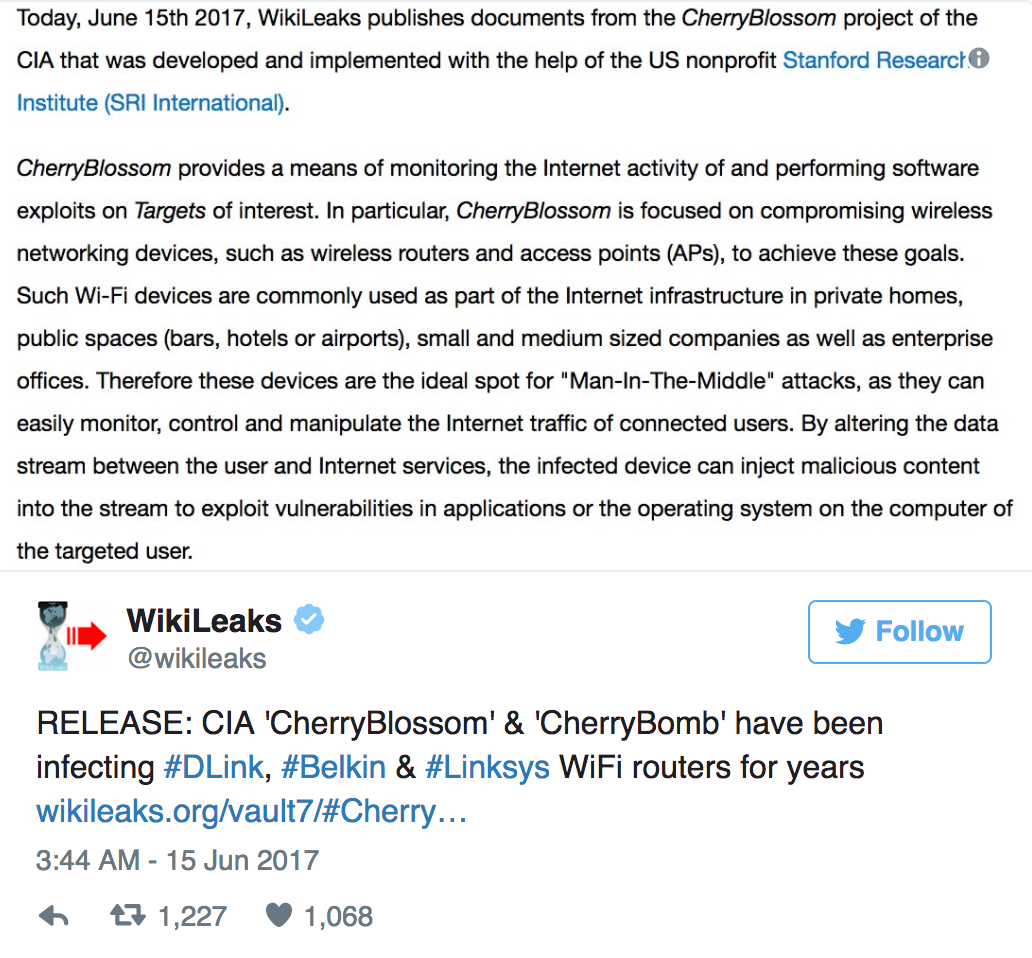 WikiLeaks has been releasing documents of the Vault 7 since March 7, its first full part revealing 8,761 documents. The most recent release prior to CherryBlossom occurred on June 1, and involved the “Pandemic” spyware.

Editor’s Note: As it is no secret that independent media has come under establishment attack, both in regard to traffic and revenue, with this new release it becomes quite clear what TLAV and other outlets have been experiencing. With regular attacks on our severs, and verifiable traffic manipulation, its apparent that any site with a dissenting view will be, and likely already are being targeted. Drowning out dissenting views simply cannot be allowed in a free society. We must now rely on the direct support of our readers and subscribers to continue to challenge the mainstream narrative. We cannot do this without you. Help us on Patreon, or simply spread the word! Follow the change. Be the change.

It’s Time for a Redistribution of Wealth; A One Time Emergency Transfer From the 1% to the People

The biggest financial companies such as Deutsche Bank are struggling or collapsing and have been since 2008. They have been subsidized by public money. They are now kiting items on their balance sheets to postpone the inevitable. The population of Greece voted 60% in favor last year, of the government not accepting a bailout package Read More…

Congresswoman-elect Rashida Tlaib has become just the second US lawmaker to express support for the Boycott, Divestment and Sanctions (BDS) movement for Palestinian rights. “I personally support the BDS movement,” Tlaib said in an interview with The Intercept news website published on Monday. “I want us to see that segregation and how that has really harmed Read More…

In 2012, a study by the National Resource Defense Council issued the warning that some 40% of America’s food was being tossed in the trash, much of it because it failed the cosmetic standards of the grocery industry. In addition to the wholesale loss of food, the water, land and other resources used to produce trashed Read More…