(WakingTimes) There is an endocrine gland within our bodies that, when unimpeded, receives more blood flow per cubic volume than almost any organ in the body, including the heart.[1][2] It has been written about in masked language, or painted in art throughout the ages, and represented in a staggering number of ways for thousands of years – yet modern medicine hasn’t found it interesting enough to study clinically – or has it?

The pineal gland’s true purpose is shrouded in mystery. Is this intentional?

Will it take an information coup to keep us from being estranged from the cosmic gifts which so many of our ancestors refer to as being locked within this tiny pine-cone shaped mass of cells, or is there modern, scientific corroboration for what the ancients called the Epicenter of Enlightenment just waiting for us to peruse?

Basics of the Pineal Gland

On the surface level, the ‘Pine’al’ gland, shaped like a pine cone, is at the geometric center of our brain and is intimately entwined with our perception of light. The pineal gland modulates circadian rhythms, and thus how we sleep. It remains uniquely isolated from the blood-brain barrier system, yet receives a higher percentage of blood flow than any other organ of the body except the kidneys. The pineal gland is tiny – smaller than a dime – located at the back of the roof of the third ventricle of the brain. (The ventricles are parts of the brain filled with cerebrospinal fluid (CSF), which act to maintain the optimum chemical environment for the central nervous system cells). The pineal becomes steadily calcified with age, starting most often before puberty, meaning it shows up clearly on skull X-rays and CT scans to allow identification of the midline.[3]

It is worth mentioning here that sodium fluoride calcifies the pineal gland. British scientist Jennifer Luke published a study showing that fluoride deposits accumulate in the pineal gland and calcify it. Just as bones go through a process of calcification to harden – a good thing, necessary for our health and functioning, the pineal gland can become ‘hardened’ through calcification, but to our greatest detriment, the reasons for which will be explained as you read further.

Additionally, a 450 page review on fluoride toxicity published by the National Research Council in 2006 reported that fluoride produced a range of negative side effects including “decreased melatonin production” and “other effects on normal pineal function, which in turn could contribute to a variety of effects in humans.”

The Pineal, Light, and Melatonin Production

The light-transducing ability of the pineal gland has led some to call the pineal the “third eye”. Oddly, the pineal contains rods and cones, just like our eyes in order to process light, even though it is smack dab in the center of our ‘dark’ brains. The gland is also responsible for creating and secreting melatonin. Melatonin communicates with our hormonal system about environmental light to the rest of the body and can entrain us to a certain biological rhythm, but there’s more to melatonin than just regulating our sleep-wake cycles.

The precursor to melatonin is serotonin, which is stored in large quantities by the pineal gland – a hormone you may have heard of since it is so keenly linked with feeling good. Without proper serotonin creation in the body, the result is depression, and sometimes severe depression. Of the 40 million cells in our brains, serotonin interacts or communicates with almost all of them.[4]

Is the Pineal Responsible for Spontaneous Realization or Psychedelic Experience?

On a spiritual level, people in hundreds of cultures throughout the world have credited the pineal gland’s proper functioning with spontaneous spiritual experiences. Does it produce a psychedelic chemical or chemicals that allows us to exit into other dimensions, and even to enter and exit physical form? Does it allow an escape from this physical world in which we are currently held prisoner? What, truly, does this mysterious gland really do?

The pineal gland forms in a human embryo at 49 days during gestation – which just happens to also be the amount of time it takes, according to Tibetan Buddhists, for a soul to reincarnate into their next physical body.[5]

Other historical as well as natural references to the pineal gland[6], and so many of them, would certainly piqué the interest of most any modern scientist studying the brain, the endocrine system, botany, or even human intelligence, but there seems to be a shrouding of the mysteries of the pineal, for reasons which might become more obvious after reading further. For example:

The Pineal, METAtonin, and OBEs

Here’s where the mainstream science on the pineal gets rather thin, to say they least. The pineal is also directly linked to the creation of METAtonin –  a close cousin of melatonin, sometimes called a “high octave melatonin.” The main psychoactive ingredient in METAtonin is DiMethyl Tryptamine or DMT. DMT, as talked about extensively by Terence McKenna and Dr. Rick Strassman, is thought to be responsible for many people’s out-of-body (OBE) experiences, yet the scientific data on these is rare and in its infant stages.

The Cottonwood Research Foundation of New Mexico found that the pineal gland of rodents does indeed produce endogenous DMT: Rodents and humans have a very similar cellular structure and that is why they are used for endocrine research.[8]

METAtonin does not suppress waking self-consciousness the same way melatonin does during sleep; instead it modifies the borders of consciousness by temporarily reprogramming our brain circuitry in a way which allows self consciousness (ego-identification) to separate from the body consciousness while remaining aware.

Andra Smith and Claude Messier, for example, conducted a study utilizing fMRI imaging at the University of Ottawa Department of Neuroscience[9] concluding that the OBE is alteration of the brain’s somatosensory (body placement) circuitry that creates the illusion of being displaced from the body. However, since consciousness cannot be measured or detected in any way, this conclusion is likely false and minimally premature.

Anthony Peake suggests that every cell in the body is a repository of information that OBConsciousness can access. His theory is that DNA molecules within cells intercommuicate to create a holographic cloud of information and that within this cloud we can find micro Einstein-Rosen wormholes that allow OBConsciousness to access distant parts of the universe and parallel realities. In essence, our experience of past, present and future is an illusion, and the pineal gland’s proper functioning allows a form of ‘time’ travel, which also amounts to ‘space’ travel.[10] 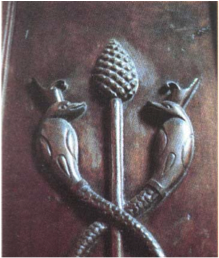 Rupert Sheldrake furthers that an OBE experience, through the opening of the pineal gland, allows us to get in touch with the planetary morphogenetic field via “morphic resonance.” Now if you recall the divine geometry referred to earlier, and contemplate the profound effect resonance or vibration has upon the human organism, all these super strange theories start to make a lot of sense – despite mainstream science’s complete blackout of information regarding these phenomena.

The Pineal as the Gate to Epiphany

The potential for internally produced DMT-based METAtonin to influence the circuitry of the brain has been an ever-present component of human evolution[12] – so much so that its influence may have played a major part in many of our greatest discoveries and epiphanies.

Those among us who pursue creative/spiritual lifestyles usually learn to temporarily glean some of these secrets or at least get a glimpse of these alternate perspectives, but by opening the ‘gates’ of the pineal gland through the production of DMT, we can access realities which likely hold the larger secrets of the ages. It can also fuel our future spiritual realization. We cannot allow the pineal gland to be left shut in the brain as a tiny, un-researched mass of cells. Though consciousness likely does not have a physical point of origination, the pineal gland seems to act as an anchor for the secrets of the Universe – and its right here, inside of us.

[10] The Mystery of Consciousness and the Illusion of Reality https://www.youtube.com/watch?v=0nsp-fE-Er8

Christina Sarich
Christina Sarich is a musician, yogi, humanitarian and freelance writer who channels many hours of studying Lao Tzu, Paramahansa Yogananda, Rob Brezny, Miles Davis, and Tom Robbins into interesting tidbits to help you Wake up Your Sleepy Little Head, and *See the Big Picture*. Her blog is Yoga for the New World. Her latest book is Pharma Sutra: Healing The Body And Mind Through The Art Of Yoga.
http://themindunleashed.com/

They are the arteries and veins of this vast, complex system of life on Earth. Fed by glaciers, rain, snow and gravity, they provide pathways for life to flourish on land, carrying nutrients from the mountains, down through the plains and the deserts to the sea. Rivers. All along their snaking lengths life flourishes – Read More…

The audacious multiple-drone attack on Russia’s military bases in Syria is increasingly looking like a false flag carried out by the American Central Intelligence Agency. Sophisticated technology and a Ukrainian connection indicate that the swarm attack with 13 unmanned aerial vehicles (UAVs) was not the work solely of Syrian anti-government militants. What’s more the Russian Read More…