Those who are connected to the crimes and misdemeanors of the Clinton cartel live in hiding for fear of their lives.

Of course there was funneling of money going on. The WikiLeaks and Guccifer 2.0 hacks went along way in documenting the quid pro quo nature of Clinton diplomacy.

Back in the 90s, it was selling nuclear secrets to China, and schmoozing with high-powered Chinese individuals, caught up in real estate deals, fundraising schemes and the like.

So it is little surprising, though certainly alarming, that this story has surfaced of a Chinese-American businessman who is living in hiding and who felt compelled to make an ‘insurance policy’ video detailing his involvement in the Clinton admin’s “Chinagate” which involved laundered funds from high-powered Chinese businessmen: 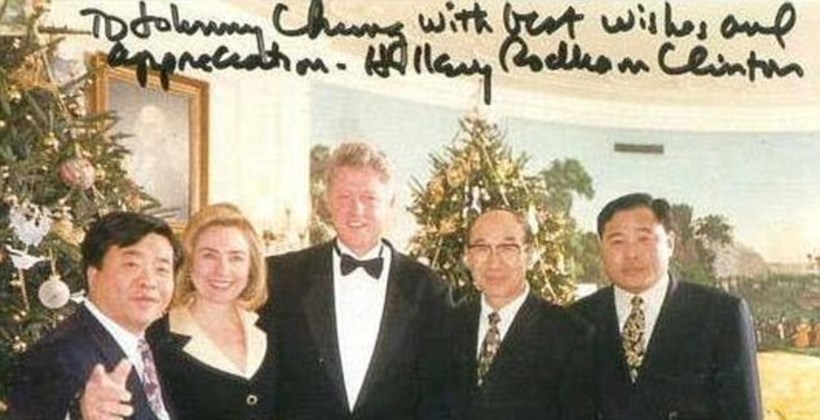 A Chinese-American businessman at the center of a Clinton campaign finance scandal secretly filmed a tell-all video as an ‘insurance policy’ – because he feared being murdered.

The Chinese-American Clinton fundraiser recorded the ‘elaborate videotaped testimony’ while in hiding in 2000.

He smuggled it to trusted friends and family with instructions to release it to the media in the event of his untimely death because he believed he was at risk of being assassinated.

Chung is believed to still be alive and living in China.

It seems that there were some implicit threats being made against him from within the system just ahead of his testimony. His FBI protection was lifted and he was tauntingly instructed to ‘call 911’ if he felt his life was in danger.

Here are the highlight excerpts of his confession video:

If one reads between the lines, and it seems clear that a threat was made against Chung to coerce him into keeping his mouth shut and saying nothing that could indict the sitting President, the First Lady or their network of operatives.

Chung described on the tape how Democrats on the House Committee on Government Reform tried to dissuade him from testifying publicly before the committee by sending his attorney a letter telling him he could plead the Fifth Amendment.

The FBI in Los Angeles began providing around-the-clock protection for him. But just a few days before Chung was scheduled to testify before a grand jury, the FBI headquarters in Washington called off the protection detail and told Chung he would have to make the trip alone.

‘I called the FBI office and offered to [speak with] the US assistant attorney again on the phone,’ said Chung. ‘And he said ‘Mr. Chung your case is over. As a normal American citizen what do you do if you feel your life is in danger? You just call 911.’

Chung’s connections to elite Chinese businessmen apparently went all the way to the top of the chain. It is evident that a foreign power influenced the iconic American president to the point of buying him out.

This is likely just the tip of the iceberg.

Submitted by Mac Slavo via SHTFPlan.com

The media, Congress, and the American people continue to fix to their attention on Brett Kavanaugh and today’s hearings regarding allegations of sexual assault and harassment against him. While these are serious issues and should not be taken lightly, there are numerous other developments that are falling by the wayside as the national conversation remains preoccupied Read More…

Obama Jokes About the “End of the Republic,” and the White House

If the corporate media wasn’t gushing over Justin Bieber’s new haircut or the nation’s lingering transphobia bathroom drama this weekend, it was lauding President Obama for his speech at the final White House Correspondents’ dinner of his presidency. The black-tie dinner draws the nation’s top celebrities, journalists, and politicians and includes a stand-up comedy routine Read More…

In An Oligarchy, Voting Is A Tool To Manufacture The Illusion Of Consent

If there’s one thing we’ve learned so far from election 2016 it’s that the American people do not understand their government. The perception is that we have a democracy, and that in this democracy we the people have vested power in our government which we exercise through the act of voting. ‘Throw the bastards out,’ has long since Read More…