Oh, good old dairy! I’m sure you remember being a kid and having your mother tell you, Drink your milk! You need it to grow and be strong! Or perhaps your mom was ahead of the curve and saw through the mass marketing campaign designed to convince us that we require milk to live a healthy life.

Aside from the obvious reasons why we don’t need cow’s milk — no other animal drinks the milk from another species; we no longer need milk once weaned from our own mother’s; and cow’s milk is, well, meant for baby cows to grow into giant cows — we most certainly do not need dairy.

This whole dairy façade began upon the premise that we need calcium, which we do, and that we can only get it through dairy products, which is false. There are a number of vegetables that contain even more calcium than milk, including broccoli, kale, cabbage, and watercress, along with a variety of nuts and seeds. But we never see ads on television telling us to eat our broccoli, even though it has many more health benefits than milk. Simply put, there is no lobbying behind broccoli. 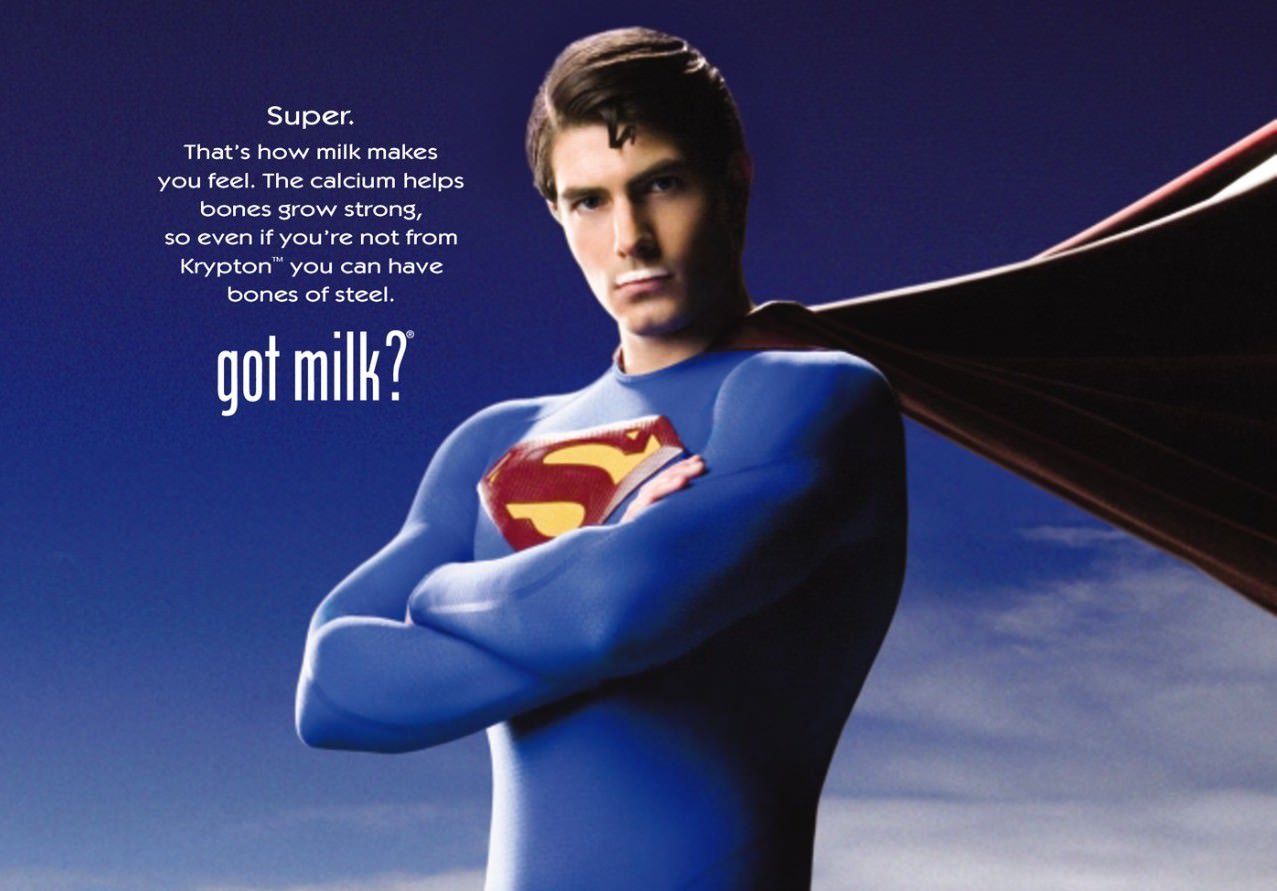 Milk is heavily pushed into the mainstream media; of course we all remember those infamous Got Milk?advertisements which used celebrities to endorse milk and which portrayed drinking milk as being both cool and health conscious. And now they have gone even further with the new ad campaign funded by Canadian dairy farmers, Milk Every Moment, with a slogan that pulls on your heart strings: “Not everything made sense when you were a kid, but drinking milk did.” They certainly know their business.

The following video created by Vox outlines the absurdity of milk quite nicely. Have a look!

Milk Simply Isn’t Good For Us

I should be clear about this statement: conventional pasteurized milk is not good for us. The cattle used to create this milk are pumped full of hormones and antibiotics, all of which end up in the milk we are consuming — along with blood, puss, and fecal matter. The pasteurization process, moreover, destroys any beneficial enzymes within the milk. Not to mention that these dairy cows are virtually kept pregnant until retirement, without even having an opportunity for their calves to drink the milk that was made for them in the first place.

It’s a horrific, backwards system. And while many people believe that raw, organic milk does offer many health benefits, it is actually illegal to sell this milk in Canada (go figure). Either way, I still don’t think milk is a necessary staple; cow’s milk is made for baby cows.

A large study coming from researchers at the Uppsala University in Sweden found that drinking milk led to an increased mortality rate and actually made bones more prone to fracturing, not less. Recently published in the peer reviewed British Medical Journal, it was specifically conducted to examine whether high milk consumption is associated with mortality and fractures in both men and women.

The study took place across three different counties in Sweden, and used data from two large Swedish cohorts, one with 61,433 women aged approximately 39-74 years old and one with 45,339 men aged approximately 45-79 years old. They were all administered food frequency questionnaires. The study used “multivariable survival models” that were “applied to determine the association between milk consumption and time to mortality and fracture.

The results were as follows:

The study concluded  that high milk intake was associated with higher mortality in one cohort of women and in another cohort of men, and with higher fracture incidence in women, though it concluded that,  “Given the observational study designs with the inherent possibility of residual confounding and reverse causation phenomena, a cautious interpretation of the results is recommended.”

This is just one example; there have been countless other studies that reveal this same risk.

Okay I’ll Give Up Milk, Now What?

You are not alone! The truth about milk is starting to come to light and many are opting for alternatives.

“U.S. milk consumption has been steadily declining by 25 percent per capita since the mid-1970s. Americans, on average, drink 37 percent less milk today than they did in 1970, according to data from the USDA,” said Nil Zacharias, Co-Founder of One Green Planet, “On the other side, non-dairy milk sales are up 30 percent since 2011, representing a $2 billion category, and growth is expected to continue outpacing dairy milk sales at least through 2018. Consumers don’t want milk anymore, and better alternatives are growing every day.”

Almond, cashew, rice, hemp, soy, and pea-protein milks are all available to you at most grocery stores. The demand for these alternatives is increasing so more options are becoming available all the time. You can even, quite easily, make your own nut milks. Check out this recipe for a homemade almond milk, or this one for a homemade cashew and almond milk blend.

Let’s just leave the cow’s milk to go where it was intended: the baby cows!

Alanna Ketler
Hi, I'm Alanna! My journey really began in 2007 when I began to question what was being presented to me, my path led me to Collective Evolution and I joined the team in 2010. Wow, has it been an incredible journey so far! I am extremely passionate about learning new information! I aim to have a voice for animals and animal rights, I also enjoy writing about health, consciousness and I am very interested in psychedelics for healing purposes! I strongly believe that knowledge is power, and the first step to creating change on this planet is by raising awareness. "If we could see the miracle of a single flower clearly, our whole life would change." -Jack Kornfield
http://TheLastAmericanVagabond.com

Back in April, when first reported that Deutsche Bank had agreed to settle allegations it had rigged the silver market in exchange for $38 million, we revealed something stunning: “in a curious twist, the settlement letter revealed that the former members of the manipulation cartel have turned on each other,” and that Deutsche Bank would provide documents Read More…

Drawing a stark contrast between himself and his counterpart in the US, Russian President Vladimir Putin made a surprise appearance at Khmeimim Airbase in Syria – which has traditionally been used by the Russian air force – on Monday morning, where he ordered the withdrawal of Russian troops from Syria, now that the ISIS insurgency Read More…

A few delicious contradictions and dissonances: The political Left has long attacked the CIA and other spying agencies as criminal liars, but suddenly those agencies are as pure as the driven snow, because they claim Russia hacked the US election and took victory away from Hillary Clinton. Putin, the supposed arch-villain in this operation, heavily Read More…