Back in 2013, the catalyst used by the US to intervene in the Syrian conflict which started in the aftermath of the Arab Spring (which according to some was inspired by CIA intervention), was a YouTube clip allegedly showing a sarin gas attack by Assad troops on his own people in the town of Ghouta, which reportedly led to hundreds of casualties. Subsequently, the video was shown to have been a hoax, but by then it was too late as the US was actively involved in the proxy war, which in the summer of 2013 nearly escalated to a naval conflict between the US and Russia. The war has since continued, although it may be finally tapering now that the Obama administration is on its way out.

However, in a surprising twist perhaps meant to perpetuate the conflict, Reuters today reported that international investigators for the first time suspect President Bashar al-Assad and his brother “are responsible for the use of chemical weapons in the Syrian conflict.”

A joint inquiry for the United Nations and global watchdog the Organisation for the Prohibition of Chemical Weapons (OPCW) had previously identified only military units and did not name any commanders or officials.

Now a list has been produced of individuals whom the investigators have linked to a series of chlorine bomb attacks in 2014-15 – including Assad, his younger brother Maher and other high-ranking figures – indicating the decision to use toxic weapons came from the very top, according to a source familiar with the inquiry.

As one would expect, Syrian government official said accusations that government forces had used chemical weapons had “no basis in truth.” The government has repeatedly denied using such weapons during the civil war, which is almost six years old, saying all the attacks highlighted by the inquiry were the work of rebels or the Islamic State militant group.

The list, which has been seen by Reuters but has not been made public, was based on a combination of evidence compiled by the U.N.-OPCW team in Syria and information from Western and regional intelligence agencies, according to the source, who declined to be identified due to the sensitivity of the issue.

In other words, yet another “confidential” report with unsubstantiated findings, very much like what the US intelligence agencies used to blame Russia for “hacking the US elections”, is about to be emerge in the public arena, and once again it will serve to stir up public anger at Assad who is now well on his way to winning the Syrian conflict, following the recent takeover of Aleppo.

Who is behind the allegation?

The U.N.-OPCW inquiry – known as the Joint Investigative Mechanism – is led by a panel of three independent experts, supported by a team of technical and administrative staff. It is mandated by the U.N. Security Council to identify individuals and organizations responsible for chemical attacks in Syria.

Virginia Gamba, the head of the Joint Investigative Mechanism, denied any list of individual suspects had yet been compiled by the inquiry. “There are no … identification of individuals being considered at this time,” she told Reuters by email.

While the narrative has not yet been formalized, the charge, once it emerges, will be serious as use of chemical weapons is banned under international law and could constitute a war crime, and while the inquiry has no judicial powers, any naming of suspects could lead to their prosecution. Syria is not a member of the International Criminal Court, but alleged war crimes could be referred to the court by the Security Council – although splits among global powers over the war make this a distant prospect at present.

As Reuters adds, the list could form the basis for the inquiry team’s investigations this year, according to the source. It is unclear whether the United Nations or OPCW will publish the list separately.

The list identifies 15 people “to be scrutinized in relation to use of CW (chemical weapons) by Syrian Arab Republic Armed Forces in 2014 and 2015”. It does not specify what role they are suspected of playing, but lists their titles.

It is split into three sections. The first, titled “Inner Circle President” lists six people including Assad, his brother who commands the elite 4th Armoured Division, the defense minister and the head of military intelligence.

The second section names the air force chief as well as four commanders of air force divisions. They include the heads of the 22nd Air Force Division and the 63rd Helicopter Brigade, units that the inquiry has previously said dropped chlorine bombs.

Effectively the list is nothing more than the Russia hacking intel report, however applied to Assad and chemical weapons, a familiar, recycled trope. Hamish de Bretton-Gordon, an independent specialist in biological and chemical weapons who monitors Syria, told Reuters the list reflected the military chain of command. “The decisions would be made at the highest levels initially and then delegated down. Hence the first use would need to be authorized by Assad,” said de Bretton-Gordon, a former commander of British and NATO chemical and biological defense divisions who frequently visits Syria for professional consultancy work.

Syria joined the international Chemical Weapons Convention under a U.S.-Russian deal that followed the Ghouta fiasco. The Syrian government, which denied its forces were behind the Ghouta attack, also agreed to hand over its declared stockpile of 1,300 tonnes of toxic weaponry and dismantle its chemical weapons program under international supervision. 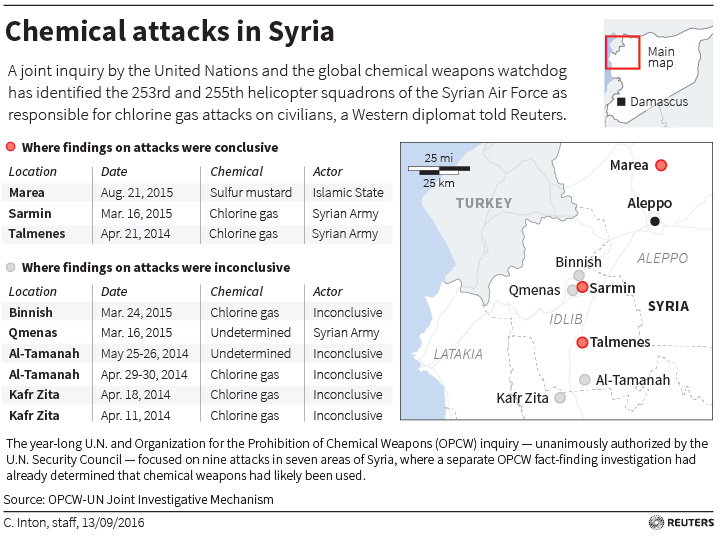 The United Nations and OPCW have been investigating whether Damascus is adhering to its commitments under the agreement, which averted the threat of U.S.-led military intervention.

Back then, the Syrian government, which denied its forces were behind the Ghouta attack, agreed to hand over its declared stockpile of 1,300 tonnes of toxic weaponry and dismantle its chemical weapons program under international supervision.

The October report identified Syria’s 22nd Air Force Division and 63rd Helicopter Brigade as having dropped chlorine bombs and said people “with effective control in the military units … must be held accountable”.

And, as Reuters concludes, the source familiar with the inquiry said the October report had clearly established the institutions responsible and that the next step was to go after the individuals, a list which includes the president of Syria.

It remains to be seen what, if any, interest Trump will have to launch action against Assad and Syria once the allegation is made public. In the past Assad has said he will end US support for Syrian rebels, the natural opponent of the Assad regime, while in November, Assad called Trump a “natural ally” in the fight against terrorism. In a interview Assad said that while allowing that what he called “opposing forces within the administration” could cast doubt on whether Mr. Trump “can deliver on his promises,” Assad said that “if he fights the terrorists, it is clear that we will be a natural ally, together with the Russians, Iranians and many other countries who want to defeat the terrorists.”

Finally, at the same time as the Reuters report hit, Russia’s foreign ministry, cited by Interfax, said that terrorists in Syria, Iraq are using chemical weapons.

The response of the Trump administration and many U.S. politicians to Khashoggi’s disappearance is largely being guided by the military-industrial complex — in this case Lockheed Martin — but masquerading as a response motivated by “human rights.” ISTANBUL — The disappearance and alleged murder of Saudi journalist and Washington Post columnist Jamal Khashoggi continues to strain relations between Read More…

5 Key Revelations For Free Thinkers To Consider After Election 2016

The political system we have today is not the democratic republic it pretends to be. National elections are orchestrated public relations events, engineered to serve the complex interests of the plutocracy and shadow government. The perception of differences between major party candidates is limited to within a narrow spectrum of mainstream ideology, and voting has become a tool used Read More…

US Strategy In Syria: ‘Create Quagmires Until We Get What We Want’

In 2013, top Obama Administration officials described their policy in the Syrian War as one of keeping the war going. The administration wanted a big seat at the table for a political settlement, which officials clarified meant ensuring that the war kept going so that there was never a clear victor. The Trump Administration seems to Read More…