Washington, D.C. — Protests and riots over the weekend in response to the inauguration of Donald Trump led to the arrest of more than 200 people — including at least six journalists — who now face the possibility of ten years in prison and fines of up to $25,000. 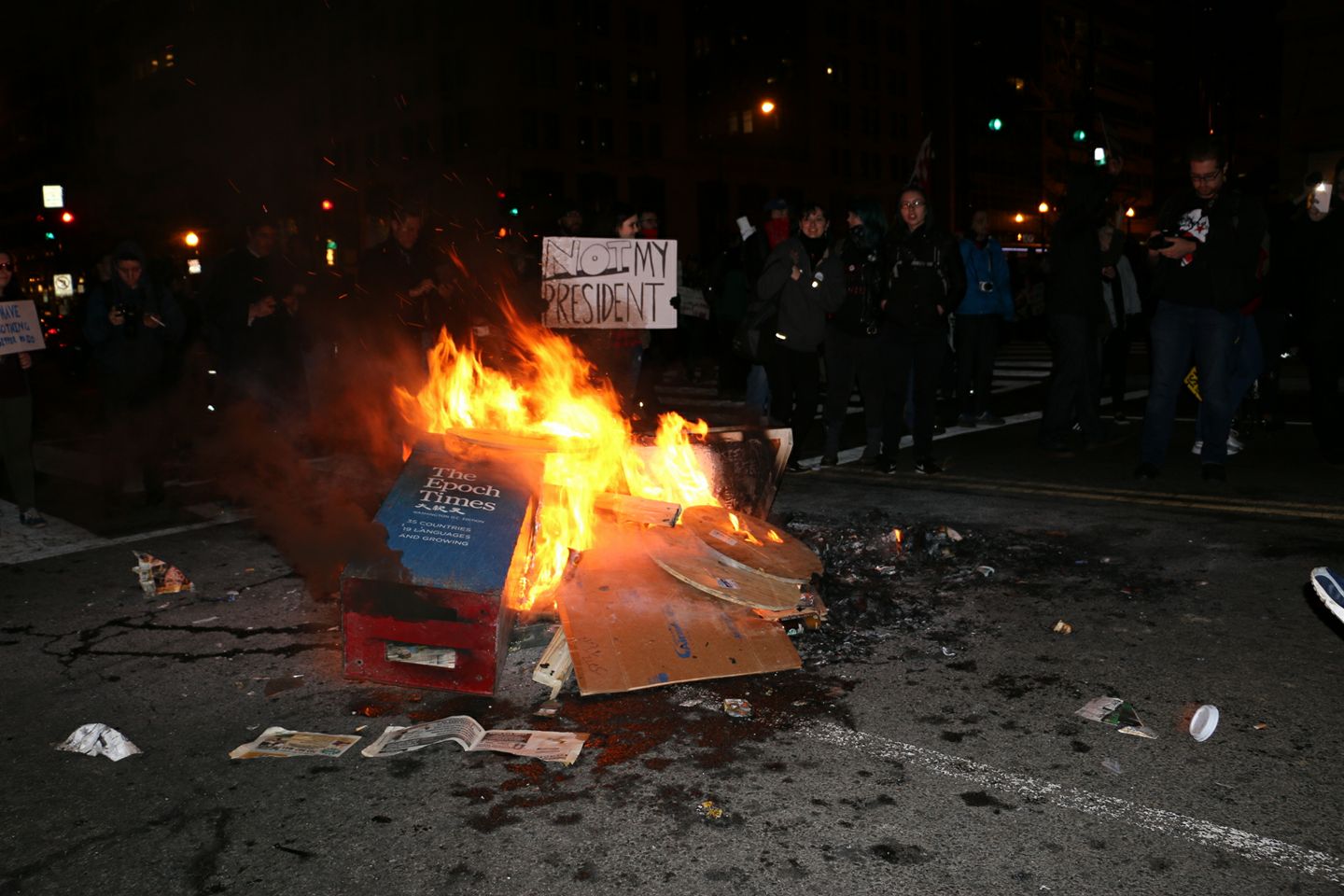 But, instead of arresting those actually responsible for the rampant destruction, police violently swarmed the trapped group — detaining legal observers and media workers along with protesters and agitators — arresting 230 and charging all who happened to be present with felony rioting. 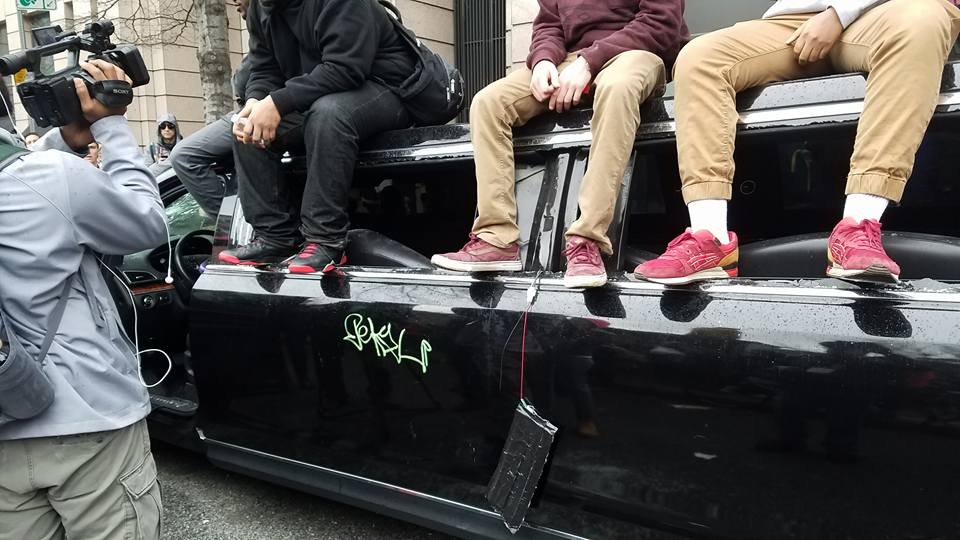 “These charges are clearly inappropriate, and we are concerned that they could send a chilling message to journalists covering future protests,” asserted Carlos Lauría, senior Americas program coordinator for the Committee to Protect Journalists. “We call on authorities in Washington to drop these charges immediately.”

On Monday, the Guardian reported on the arrests of journalists Evan Engel of Vocativ and Alexander Rubinstein of RT America, but by Tuesday, the outlet learned four additional journalists face the same charges for reporting on the incident.

Shay Horse, an independent photojournalist and activist; Aaron Cantú, a freelance journalist whom CPJ says has written for The Baffler, Truthout, and Al-Jazeera; Matt Hopard, independent journalist and livestreamer; and Jack Keller, a producer for the web documentary series Story of America, are looking at possible lengthy stays behind bars — simply for exercising constitutionally protected rights of a free press.

They deny any wrongdoing.

Police held Keller for more than 36 hours despite telling them he’d been covering and documenting the event as media.

“The way we were treated was an absolute travesty,” he told the Guardian, adding his cellphone has not been returned.

“It is a maddening and frustrating situation,” Keller’s editor, Annabel Park, lamented. “These are people who were there observing and documenting.”

In a statement emailed to CPJ, Vocativ spokeswoman Ellen Davis said, “The arrest, detainment and rioting charge against journalist Evan Engel who was covering the protests for Vocativ are an affront to the First Amendment and journalistic freedom. Vocativ will vigorously contest this unfounded and outrageous charge.”

Davis noted police seized Engel’s phone and camera and have yet to return them, though the department refused to comment on any evidence it may or may not have regarding pending cases.

“Some journalists, including three from a local NBC station and one from U.S. News, were allowed ultimately to leave the corralled group. The NBC journalists were told their names had been provided to a lieutenant’s superior after their boss called.”

According to a report by CPJ,

“The criminal complaints say that the reporters are charged under section 1322(b) of the D.C. criminal code, which establishes penalties of up to 180 days in prison and a fine of up to $1000. The language in the complaint, however, references rioting that results in bodily harm or more than $5,000 in damage, which can be punished by a maximum of 10 years in jail and fines of up to $25,000. Police spokeswoman Rachel Reid told CPJ in an email she was unable to comment because a lawsuit had been filed in the case.”

Charging six journalists and at least one attorney acting as a legal observer under this section of the code — as among “every person who willfully incited or urged others to engage in the riot” — is an absurd overreach not unnoticed by the legal and media communities.

“What they [the police] can’t do is round up everybody who was there and indiscriminately arrest everybody who happened to be on the block,” asserted Jeffrey Light, a District of Columbia attorney who filed a class-action lawsuit against both aforementioned police departments on behalf of Colorado legal observer and attorney, Benjamin Caraway, over the mass arrest.

Caraway — who had been wearing a green hat to clearly identify himself as a legal observer before he was arrested — is currently the only named party to the class-action suit.

Light said the arrests, themselves, weren’t the only concern about how police handled the situation — officers indiscriminately used batons, ‘sting balls,’ and pepper spray to affect the arrests and throughout the inauguration weekend protests.

D.C. and Park Police frequently sprayed crowds with OC spray — directly hitting journalists, nonviolent protesters, and bystanders, alike — and even shoved media workers to the ground, damaging expensive equipment and interfering with the right to document events as they unfolded.

As the Guardian reports, the National Lawyer’s Guild accuses D.C. metropolitan police of having “indiscriminately targeted people for arrest en masse based on location alone.”

Attorney Mark Goldstone, representing around 50 of those charged with felony rioting, told FOX News police “basically identified a location that had problems and arrested everyone in that location,” and that,

“They arrested everyone in a single location including reporters, lawyers, law students and non-riotous protesters.”

In fact, journalists did show credentials to officers to explain their presence among those kettled to no avail.

“I was hit in the face with a flash grenade,” Rubinstein told RT of the January 20th incident, “it blinded me for a moment and my ears were ringing for a while…By the time I was done being treated and I could see again, we were encircled by police and I was told that everybody present would be arrested. It doesn’t matter that I’m press.”

Maggie Ellinger-Locke, of the D.C. branch of the National Lawyer’s Guild, explained in a statement the random use of tear gas, mass arrests, and other police actions over the weekend were illegal — but beyond that, have far worse repercussions:

“These illegal acts are clearly designed to chill the speech of protesters engaging in First Amendment activity.”

A police report cited by the Guardian states,

“The crowd was observed enticing a riot by organizing, promoting, encouraging and participating in acts of violence in furtherance of the riot.”

Of course, journalists and legal observers, as well as nonviolent protesters, could not possibly be considered participants or agitators of destructive riots — and a crowd this disparate would never act as a single unit.

In fact, the Orwellian mass arrest sans just cause tells of a potential cooling or self-censoring effect on free and independent media — a cynic might say by design.

Keller, the documentarian charged with felony rioting and facing ten years in prison, could have been speaking for the legal observer and five other journalists when he plainly stated,

“I had absolutely nothing to do with the vandalism.”

The Prison Industrial Complex: We Are Number One, Just Not In The Way We Think

With every election cycle comes a surge of over-patriotic sensationalism designed to engage the voters and make those who choose not to wear an american flag ensemble while waving three banner and shouting “were number one!” feel as if they are somehow not American enough. Now this is not to disparage patriotism, I love this Read More…

Still No End In Sight For War In Yemen, Despite Biden’s Pledge To End It

The fighting in Yemen has continued to increase, despite Biden’s recent announcement to end US support for offensive action from the Saudi-led coalition. On Thursday the UK, US, Germany and France all sent their representatives to meet and discuss the most pressing foreign policy issues. The quartet, in a joint statement to the press, asserted Read More…

Washington, DC – The Pentagon’s Joint Chiefs of Staff (JCS) have been indirectly providing intelligence on the Islamic State to the government of Syrian President Bashar Assad, in direct contrast to the Obama administration’s agenda of regime change, in an effort to stop Syria from becoming another failed state from which terrorists can operate. A Read More…