To the great dismay of this nation’s ruling elite, the rapidly expanding revelation that elections in the United States are not as democratic as advertised, is quickly making its way through the minds of Americans. As the extremely transparent establishment effort to place Hillary Clinton on the political throne becomes a household conversation, and Americans begin to show their disenfranchisement and outright disdain for insider politics and politicians, T.H.E.Y. are scrambling to find another path to victory. So, enter the new Russian hack scare designed to allow the Department of Homeland Security (DHS) to take actual operational control over the national presidential election. Sound alarming, it should:

By branding the election process “critical infrastructure” it allows the DHS, via the Patriot Act, the ability to place the elections themselves under the umbrella of their federal mandate, which is to have domain and responsibility over what they deem a “critical infrastructure.” If these federal institutions were morally sound, and not infested with corruption and shrouded in a veil of unconstitutional secrecy, this would appear to be a positive step toward overall protection of what we deem a very important aspect of this nation’s illusion of democracy: the presidential election.

However, similar to the recent intentional disregard by the DEA for the widely accepted and scientifically proven medical uses of cannabis, where it announced it would keep cannabis a schedule 1 substance; or similarly with the recent kratom scheduling, the DHS is choosing to use this false claim as an excuse to take action based on zero substantial evidence. Their decision to step in and “take charge” of the election process is all based on the claim that Russian hackers, or rather, “foreign hackers,” as they’re calling them, are intentionally manipulating the US election(with the obvious personal undertones and clear suggestions that it was most likely the Russians despite the FBI’s assertion that they have no evidence to make that claim).

The hypocrisy is almost too much to bear when taking into account the continually increasing amount of damning evidence that not only suggests, but proves this election is being tampered with by the very people crying out about Russian intervention. 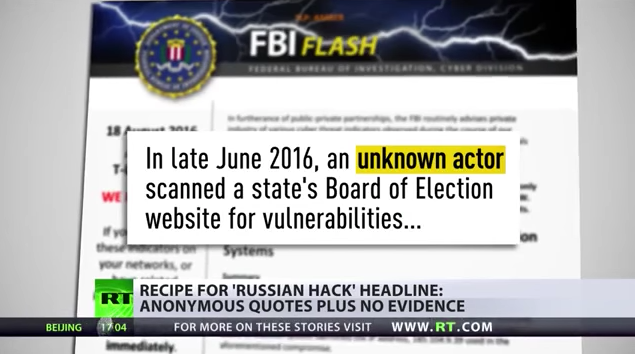 When diving in further, it becomes clear that this claim of Russian interference is no more than a ploy to allow complete control of this election’s already fraudulent outcome. Their own claims begin to contradict one another with the slightest amount of research:

As the above organization is a Russian sponsored outlet, anything they say on matters pertaining to such specific international connections should appropriately be taken with a grain of salt; yet the facts presented are sound and inarguable. These actions are being based on a desired perception, and not an actual proven Russian threat, as the FBI statement clearly shows. So before you quickly jump onto the next US created Boogyman, research this topic for yourself and come to your own conclusions, and if you’re already reading this, you most likely already have.

Although the links thus far have, indeed, circumstantially indicated Soros’ involvement, the connections haven’t been entirely clear — until now. While it’s certainly true Soros hasn’t forked over a personal check to any participants in these events — frankly, even suggesting that would be the case ignorantly ignores the larger issues at play — the Read More…

Welcome to The Daily Wrap Up, a concise show dedicated to bringing you the most relevant independent news, as we see it, from the last 24 hours (2/23/18). When are we going to see that — faked, created, hoaxed or otherwise — any time an incident can be used to manipulate the emotions of the Read More…

Welcome to Foreign Policy with Robert Inlakesh. In this show Robert dives into some of the most important foreign policy discussions of today while highlighting the most important information – primarily that which is missed, excluded or misrepresented by the MSM. Video Source Links: https://www.timesofisrael.com/russia-provocative-israeli-strikes-in-syria-endangered-2-civilian-flights/  https://www.timesofisrael.com/5-said-killed-in-airstrikes-on-pro-iranian-militias-in-eastern-syria/  https://www.rt.com/news/510705-syria-masyaf-israeli-aggression/  https://www.middleeasteye.net/news/israel-gideon-saar-netanyahu-unseat  https://socialistworker.co.uk/art/50531/Israel+shells+and+bombs+besieged+Gaza+Strip  https://www.al-monitor.com/pulse/originals/2020/12/israel-benny-gantz-benjamin-netanyahu-yair-lapid-elections.html  https://www.timesofisrael.com/only-the-strong-survive-gantzs-new-campaign-videos-laud-his-idf-bona-fides/  https://www.latimes.com/world-nation/story/2020-12-28/netanyahu-hot-seat-israel-fourth-election-two-years  https://www.un.org/unispal/document/gaza-unliveable-un-special-rapporteur-for-the-situation-of-human-rights-in-the-opt-tells-third-committee-press-release-excerpts/  https://www.dailysabah.com/world/mid-east/over-400-palestinian-children-arrested-by-israeli-forces-this-year  https://www.ohchr.org/EN/NewsEvents/Pages/DisplayNews.aspx?NewsID=26619&LangID=E Read More…