Russia claims that the reported chemical attack in Syria last Sunday was staged by the “white helmets,” a US-funded NGO lauded by mainstream media for their humanitarian work, while long-suspected of performing less-than humanitarian deeds behind the curtain.

“But we’ve seen them on the video!” responds EuroNews correspondent Andrei Beketov.

“There was no chemical attack in Douma, pure and simple,” responds Chizov. “We’ve seen another staged event. There are personnel, specifically trained – and you can guess by whom – amongst the so-called White Helmets, who were already caught in the act with staged videos.”

Russia said it sent experts in radiological, chemical and biological warfare – along with medics, in order to inspect the Eastern Ghouta city of Douma where the attack is said to have taken place.

In a statement to the UN Security Council on April 9, Russia’s UN Ambassador, Vassily Nebenzia outlined Russia’s position on the timeline of the attack in Douma, as well as the Western response after the White Helmets reported that chemical agents were used:

On April 6, the new head of Jaysh al-Islam, following instructions of sponsors, derailed the evacuation of a party of fighters from Douma and resumed the rocket and mortar fire against residential areas in Damascus. The firing targeted [indistinct name of four areas]. According to official information, eight people died. 37 civilians were wounded. Unfortunately, we failed to see statements from Western capitals condemning the shelling of a historical district of Damascus. The following day, April 7, fighters accused the Syrian authorities of dropping barrel bombs with toxic substances. At the same time, diversions were being mixed up. It was either called sarin, chlorine, or a mix of toxic gases. Based on a well-known scheme, these rumors were immediately taken out by those who are financed by western capitalists; I am referring to NGOs and the White Helmets who are mendaciously acting under the cloak of health professionals. And these reports were also taken up and transferred to media outlets.

It behooves us once again to state that many of these dubious structures have a clear list of the email addresses of representatives of Security Council members, which shows that some of our colleagues, with a reckless approach towards their status, are leaking sensitive information to their protégés. Incidentally, all should recall the way that accidentally, the White Helmets put on the internet a video which showed preparations for staging a so-called victim of an alleged attack perpetrated by the Syrian army.

Indeed, over the last several years, reports out of Syria have been criticized as being primarily of anti-Assad origin and unverified.

In a speech at the UN, pro-Assad Canadian journalist and RT contributor Eva Bartlett gave her account of what’s going on with reports out of Syria – calling western sources “compromised” and “not credible.” 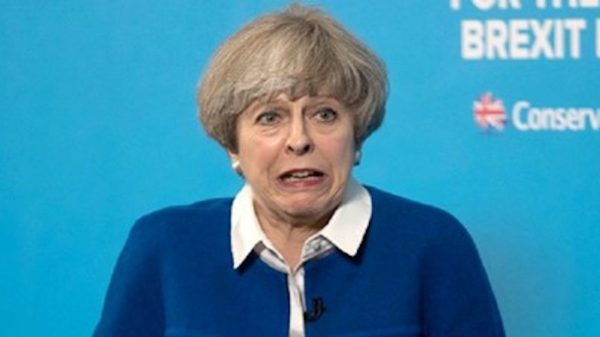 The prime minister rejected a swift retaliation as inspectors from the Organisation for the Prohibition of Chemical Weapons (OPCW) prepared to visit the Damascus suburb where at least 40 people were reported to have been killed by chlorine gas on Saturday. –The Times

May chaired a meeting of the national security council in London this week, where she spoke with Presidents Trump and Macron for the first time since the Douma chemical attack. It is reported that Trump, who’s had a remarkable change of heart on U.S. involvement in Syria since the election, did not ask the UK to join military strikes.

A No 10 read-out of her call with the US president stated that they agreed the international community “needed to respond” but stopped short of blaming the Syrian regime. “They agreed that reports of a chemical weapons attack in Syria were utterly reprehensible and if confirmed, represented further evidence of the Assad regime’s appalling cruelty against its own people and total disregard for its legal obligations not to use these weapons,” it said. –The Times

President Trump also appears to have backed off an imminent strike after promising Syria would “pay a big price,” and that the U.S. response would be decided by Wednesday. Trump reportedly canceled travel plans after reports emerged that Russian and Iranian involvement in Syria would complicate matters in the region.

Meanwhile, Secretary of Defense James Mattis has said that the U.S. is still assessing intelligence on the alleged chemical attack, saying in a statement “we’re still working on this.” In the same breath, Mattis said the United States is “ready” to provide military options for Syria.

New developments in the killing of Philando Castile have revealed potentially crucial information that gives new insight into the incident. In a dispatch recording posted by KARE 11 in Minnesota, audio clips of dispatch recordings related to Castile’s death reveal new details about what transpired. In the shocking video, streamed on Facebook Live, Philando Castile Read More…

A new CNN investigation has uncovered a network of slave markets operating in warehouses in various cities across Libya six years after NATO-led intervention in the country toppled the government of Muammar Gaddafi in support of US and UK backed rebels. And not only did CNN confirm the presence of slave auctions where human beings are being sold for Read More…

Welcome to The Daily Wrap Up, a concise show dedicated to bringing you the most relevant independent news, as we see it, from the last 24 hours (4/6/18). What is it that stops certain individuals from acknowledging a blatant truth, from ignoring the reality of the situation at hand in favor of a more flowery Read More…