While the Economist’s endorsement of Hillary Clinton – and its antipathy toward Donald Trump  – is no secret, we are “confident” there is little connection between the economic publication’s ideological leanings and the just released report by the Economist’s in house Intelligence unit, which has officially demoted the US to a second-class democracy.

According to the Economist Intelligence Unit, the US has lost its status as a “full democracy” and is now what the research group calls a “flawed democracy,” as a result of an erosion of public trust in political institutions which, luckily, pre-dates Trump’s victory.

In the EIU’s ninth annual Democracy Index, the number of full democracies around the world fell to 19, from 20 the year before. America’s downgrade puts it at 21 in the rankings, below Japan and even with Italy.

The US has been “teetering on the brink of becoming a flawed democracy” for years, the report says quoted by Quartz. Regardless of the result of the 2016 presidential election, the US was due a downgrade. Trust has been declining in the US for decades, leaving the country’s institutions battling a “legitimacy crisis” and struggling to sustain representative democracy in its current form, the report says.

“Democracy is in trouble in the West, in the mature democracies of western Europe and the US, which are no longer obvious beacons for those striving for democracy in the nondemocratic world,” the EIU said.

Related Reading: The Acceptance of Media Bias and the Illusion of Democracy

The decline started in the late 1960s with the Vietnam war, civil rights movement, assassinations of Martin Luther King and Robert F. Kennedy, and the Watergate scandal. It got worse over the past decade, especially the wars in the Middle East, the financial crisis, and persistent gridlock in Washington. And then Trump:

By tapping a deep strain of political disaffection with the functioning of democracy, Mr Trump became a beneficiary of the low esteem in which US voters hold their government, elected representatives and political parties, but he was not responsible for a problem that has had a long gestation.

According to the EIU, the decline in public trust in institutions also helps explain the UK’s Brexit vote and the rise of populist movements around the world. However, unlike the US, the EIU judged that democracy improved in the UK, with the country’s index score rising from 8.31 to 8.36. The Brexit referendum drew a much higher turnout than in other recent votes, boosting the country’s political participation score.

In total, democracy, as measured by the EIU, declined in 72 countries and increased in 38 countries last year. Almost half of the world’s population lives in a democracy of some sort, but only around 5% live in a “full democracy.” Meanwhile, about 2.6 billion people live under authoritarian rule. Norway topped the list while North Korea came last. 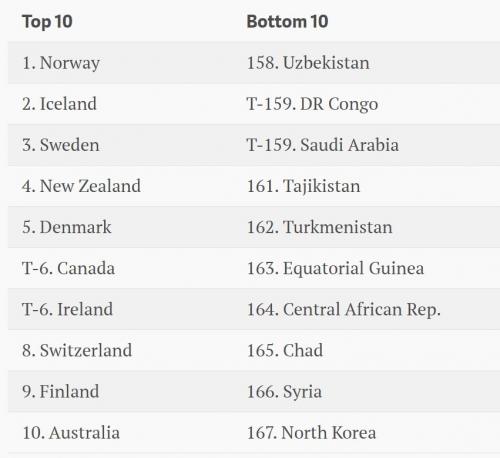 It’s Official: US Is Seeking Death Penalty In Drug Cases – But Not For Big Pharma

When Donald Trump suggested imposing the death penalty in drug-related cases, many people thought he was just spouting off at the mouth. Unfortunately, his statements were not just typical Trump talk. They are now official Justice Department policy. U.S. Attorney General Jeff Sessions instructed Federal Prosecutors on March 21 to begin seeking the death penalty in Read More…

News circulated recently that the DEA had rescheduled cannabidiol (CBD), the nonpsychoactive ingredient in cannabis, but the technicalities of the agency’s decision actually show their ruling is highly restrictive. The decision concerned a recently FDA-approved pharmaceutical version of CBD, produced by GW Pharmaceuticals. Due to the federal government’s continued prohibition of cannabis Epidiolex was prohibited from going to market unless the Read More…