Two days ago we previewed the US budget deficit for the first 11 months of fiscal 2018, which according to CBO data, hit $895 billion, up $222 billion or 39% from the same period last year. Additionally, we noted that according to CBO calculations, the US would hit a $1 trillion deficit in calendar 2019, one year sooner than the previous forecast of 2020.

Today, the US Treasury released the detailed budget deficit breakdown for the month of September and the first 11 months of the year, and the numbers are scary.

According to the latest Monthly Treasury Statement, in August, the US collected only $219BN in tax receipts – consisting of $106BN in individual income tax, $93BN in social security and payroll tax, a negative $3BN in corporate tax and $24BN in other taxes and duties- a drop of 3.2% from the $226BN collected last August… 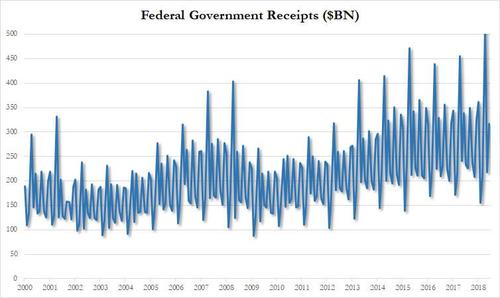 … but more concerning was that in August, the 12 month trailing receipt total was barely higher compared to a year ago, up just 0.3% Y/Y after rising as much as 3.1% at the end of 2017, and on the verge of turning negative year over year. 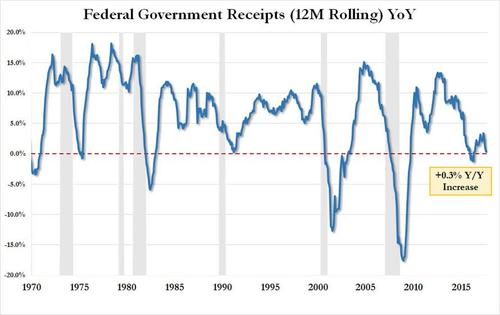 The real highlight of the August budget report was that government outlays, or total spending, soared to $433.3 billion, not only 30% higher than a year ago, but the highest government monthly outlay of any month on record. 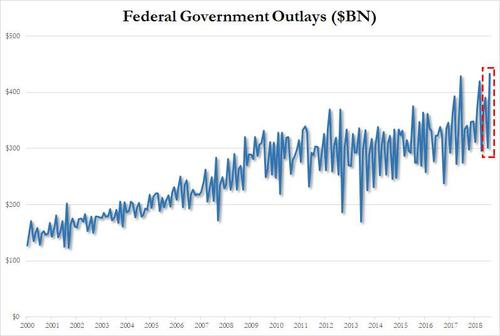 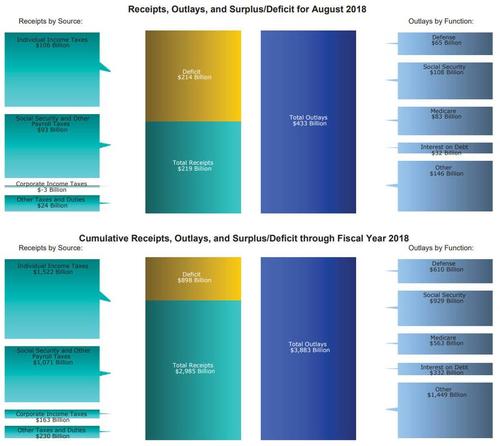 This resulted in a August budget deficit of $214 billion, which was not only one of the highest one-month deficits on record, but also the highest August deficit on record. 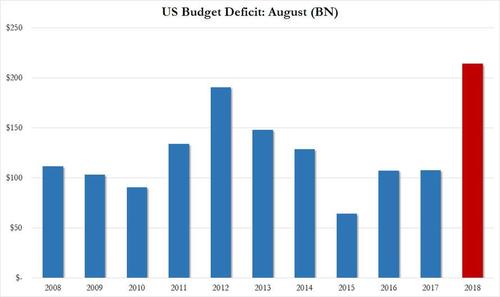 The August deficit brought the cumulative 2018F budget deficit to over $898BN during the first 11 month of the fiscal year, up a whopping 40% over the past year. 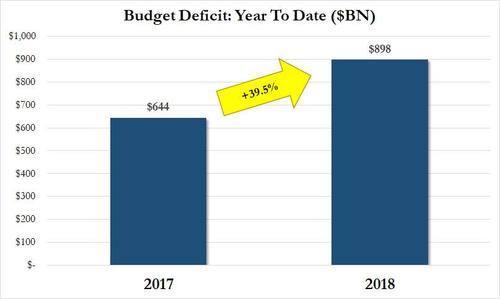 This was the highest 12 month cumulative deficit since February 2013; as a reminder the deficit is expect to increase further amid the tax and spending measures, and rise above $1 trillion as soon as next year. 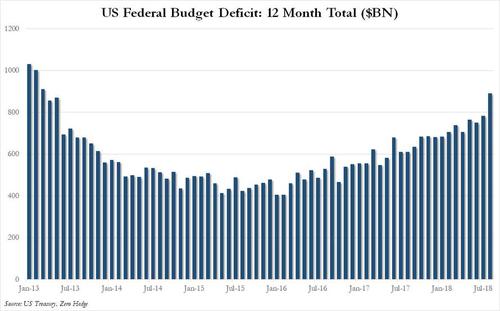 And while the August numbers had a few calendar quirks, until recently Most Wall Street firms forecast a deficit for fiscal 2018 – which closes on September 30 – of about $850 billion, a number which has already been surpassed by $50 billion, at which point things get… much worse. As we showed In a recent report, CBO has also significantly raised its deficit projection over the 2018-2028 period.

But while out of control government spending is clearly a concern, an even bigger problem is what happens to not only the US debt, which recently hit $21.3 trillion, but to the interest on that debt, in a time of rising interest rates.

As the following chart shows, US government Interest Payments are already rising rapidly, and just hit an all time high of $538 billion in Q2 2018. 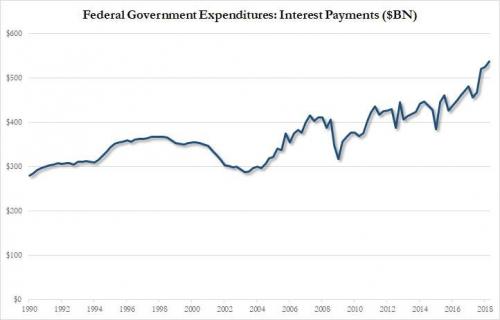 The bigger question is with short-term rates still just around 2%, what happens when they reach the mid-3% as the Fed’s dot plot suggests it will?

Colonel Lawrence Wilkerson, speaking at a Ron Paul Institute conference this past weekend, predicted US troops would remain in Afghanistan another 50 years — just as they have in Germany and Korea. He also termed the ongoing US-backed campaign in Yemen the “most brutal war on earth,” a war western media overwhelming ignore.  Colonel Douglas Macgregor at the same Read More…

The response of the Trump administration and many U.S. politicians to Khashoggi’s disappearance is largely being guided by the military-industrial complex — in this case Lockheed Martin — but masquerading as a response motivated by “human rights.” ISTANBUL — The disappearance and alleged murder of Saudi journalist and Washington Post columnist Jamal Khashoggi continues to strain relations between Read More…

An Introduction To Permaculture And Its Symbiotic Relationship With Agorism

One of the focuses of The Last American Vagabond has been to not only properly diagnose all the problems facing humanity at this current juncture, which undoubtedly is important, but also to evolve past that by discussing solutions to these problems. In the end, what’s the point of understanding all these problems, if the alternative Read More…