A Syrian rebel commander said on Thursday that rare military exercises with US Marines in southern Syria sent a strong message to Russia and Iran that the Americans and the rebels intend to stay and confront any threats to their presence.

Colonel Muhanad al Talaa, commander of the Pentagon-backed Maghawir al Thawra group, told Reuters the eight days of drills that ended this week at the US military outpost in Tanf were the first such exercises with live-fire air and ground assault involving hundreds of US troops and rebel fighters.

“These exercises have a big importance and have beefed up the defenses of the area and raised the combat capabilities and morale and that of civilians in the area,” Talaa told Reuters by phone from Tanf, near Syria’s borders with Jordan and Iraq.

A US military spokesman said the exercises were a show of force and that the Pentagon had notified Moscow through “deconfliction” channels to prevent “miscommunication or escalate tension”.

“The exercise was conducted to reinforce our capabilities and ensure we are ready to respond to any threat to our forces within our area of operations,” Colonel Sean Ryan told Reuters in an email response to questions.

Russia and the Syrian government have repeatedly called on Washington to pull out its troops from the Tanf base, where it has declared a 55km-radius “deconfliction zone” off-limits to others.

Rebels say hundreds of US Marines arrived this month in Tanf to join special operations troops already based in the garrison and participate in the drills, amid heightened US-Russian tensions in Syria and a naval buildup in the Mediterranean. 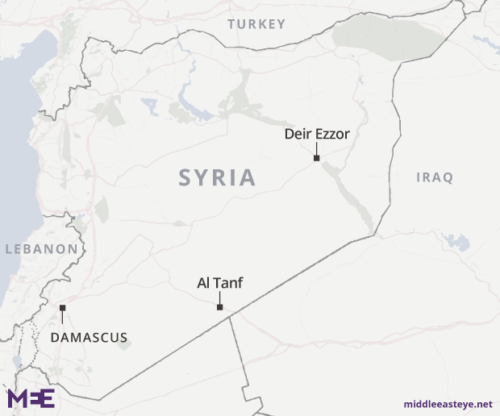 The “deconfliction zone” has become a safe haven for at least 50,000 civilians who live in the Rukban camp that lies within it. Russia’s defense ministry in August repeated an accusation that Washington has been harboring Islamic State (IS) group militants within the zone.

“We are staying whether the Russians or Iranians want or not,” the rebel commander added.

The outpost, surrounded by desert, was established during battles against IS militants who used to control eastern Syria bordering Iraq.

After the militants were driven out, US-led coalition warplanes struck Iranian-backed militias on several occasions to prevent them advancing, in what Washington has described as self-defense.

Tanf lies on the strategic Damascus-Baghdad highway, once a major supply route for Iranian weapons into Syria.

This makes the base a bulwark against Iran and part of a larger campaign against Iran’s military expansion in the Middle East.

Rebels say the US military’s new policy to bolster Tanf’s capabilities is a big shift.

“If Tehran does not respond to the demands of the Americans there is a big likelihood they will be hit. It’s inevitable the Iranians leave Syria. This should happen quickly and in a decisive way,” Talaa said.

US President Donald Trump has repeatedly vowed to pull US troops out of Syria in spite of apparent opposition from the Pentagon. Still, no major change has occurred in the US military position in the war-torn country since he made that pledge earlier this year.

Meanwhile, Jordan and Syria held their first technical talks on opening a major border crossing in southern Syria that was recaptured from the opposition in July, a Jordanian official said on Thursday.

Damascus, which took back the crossing from the opposition, hopes to reopen the Nassib route, which is vital to its hopes of reviving Syria’s shattered economy and rebuilding in territory now under its control.

Amman also hopes the opening of the border crossing will reactivate billions of dollars of annual transit trade between Europe and Gulf markets across Syria.

The official told Reuters the meeting that was requested by Syria was held on Wednesday at the Jaber crossing, on the Jordanian side of the border, where technical teams began talks on the practical arrangements from customs to security needed to reopen the crossing.

The crossing’s recapture by Syrian forces in July was a main goal of a Russian-backed military campaign launched in June to regain control of rebel-held parts of the southwest.

Western diplomatic sources say Russia had been pressing Amman to open the crossing as part of a drive to show the war is drawing to a close and to help rehabilitate President Bashar al-Assad.

Techno-Tyranny: How The US National Security State Is Using Coronavirus To Fulfill An Orwellian Vision

Last year, a government commission called for the US to adopt an AI-driven mass surveillance system far beyond that used in any other country in order to ensure American hegemony in artificial intelligence. Now, many of the “obstacles” they had cited as preventing its implementation are rapidly being removed under the guise of combating the Read More…

Midway through January of this year, “Anonymous Official” YouTube channel released a video entitled, “Anonymous – Elucidating #OpISIS and #OpTrump.“ For those keeping up with current news headlines, Anonymous operations like #OpTrump and #OpISIS have caused quite a stir. While having the presentation of authenticity, these operations have proven to be nothing more than an Read More…

The Facts Show These Five Families Rule the World

As you begin to understand world governments don’t have your best interests in mind — that enemies of the State could more aptly be called enemies of the globe’s corporate and banking elite — power comes sharply into focus. Those who actually hold the power control the world’s economies, and it’s clear the fates of Read More…