Unless you’re living under a rock, you have no doubt heard something about Donald Trump’s first pilgrimage as Commander-in-Chief. (Sidebar: If you are living under a rock that somehow shields you from the 24/7 news cycle, please let me know where that rock is located and how much the rent is, because I may just move in with you.)

For the past week, Trump has been jetting between the home bases of the world’s four major religions. He spoke to the Muslims in Saudi Arabia. He spoke to the Jews in Israel. He spoke to the Catholics at the Vatican. And he spoke to the holiest of them all, the High Priests of Death (war be upon them) at NATO’s shiny new billion-dollar headquarters in Brussels, complete with charred 9/11 wreckage at the entrance!

Although thousands of gallons of ink could be, should be, and has been spilled on each leg of this remarkable trip, there are still many important stories that you aren’t going to hear about if you’re reading only the MSM headlines (surprise, surprise).

But don’t fret! I’m here to help fill in some of the gaps for you! However, since I haven’t yet figured out how to clone myself several times over, I’ll have to limit myself to three tales from the many that you weren’t told about the Saudi trip.

So, without further ado, here are three stories about the much-ballyhooed $110 billion Saudi arms deal that you aren’t going to be reading about in the lamestream news.

1) The Arms Deal is Mostly Old News and Paper Promises

The Saudi arms deal is the stuff that headline writers dream about. It involves $110 billion in “defense equipment and services” sales to Saudi Arabia, payable immediately, and $350 billion in sales over the next 10 years. The largest single arms sale in US history. It’s got a trademark Donald J. Trump “bigly” written all over it.

It’s always good to read the fine print on anything, and massive arms deals like this are no exception. The White House has so far been a bit coy about the particulars of the deal and how exactly they added up the $110 billion total. The State Department press release on the deal is heavy on rhetoric and short on facts, to the surprise of no one. So exactly how much of this deal is really the work of the Great Dealmaker Himself and how much was the work of his predecessor is an open question. 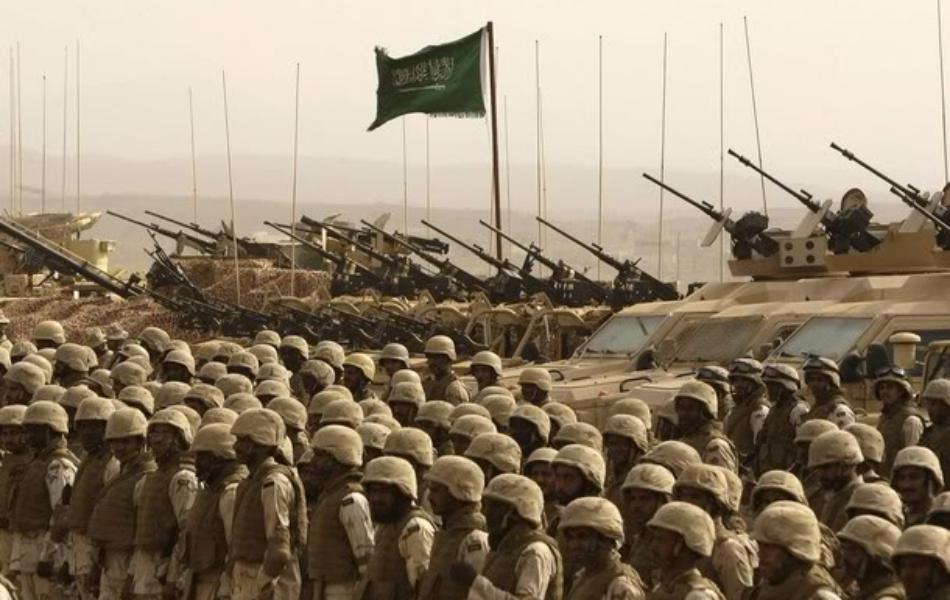 In an article on the subject, “There’s Less Than Meets the Eye in Trump’s Saudi Arms Deal,” policy analyst William Hartung notes that “Many of the items mentioned as part of the package had already been offered to Riyadh during the Obama administration, including a Patriot missile defense system, Multi-mission Surface Combatants, attack and transport helicopters, and artillery systems.” The value of these offers, already on the books before Trump stepped into the Oval Office, represented tens of billions of dollars of that $110 billion takeaway figure.

And as for the $350 billion? This is a ten-year projection of a possible total of what could result if everything goes according to what has been promised. If you noticed all the qualifiers in that sentence, congratulations for paying attention.

To put in perspective what promises like these represent in real dollar terms, cast your mind back to the previous puppet administration. Do you remember that last September Hartung added up the 42 different arms deals that Obama concluded with the Saudis? And do you recall his discovery that the President had notified Congress of $115 billion in weapons, equipment and services offers to Riyadh during his time in office?

And of that $115 billion in promises, do you know how much was actually delivered? About $20 billion. So, like everything else pledged by every occupant of the White House, these paper promises aren’t worth the cocktail napkins they’re written on.

Of course, we’re talking about arms sales here, so it’s actually a good thing that they’re lying about the numbers to make it sound more impressive than it really is. In fact, it would be best for the world’s sake if the actual value of this deal was $0 because…

It’s no secret that the Saudi’s war on Yemen—a destructive and terrible campaign of bloodshed that has cost the lives of many innocent civilians and threatens many more with imminent starvation—is in fact a proxy war on Iran, or at least is intended as such by the Saudis. And it is also far from secret that that proxy war is only possible with American arms, equipment, and tactical support, first under Obama (who apparently felt that helping the Saudis obliterate Yemen was a good consolation prize for the Iran nuclear deal), and now under Trump (whose hatred for Iran is only surpassed by his hatred of consistency or sticking to principals). 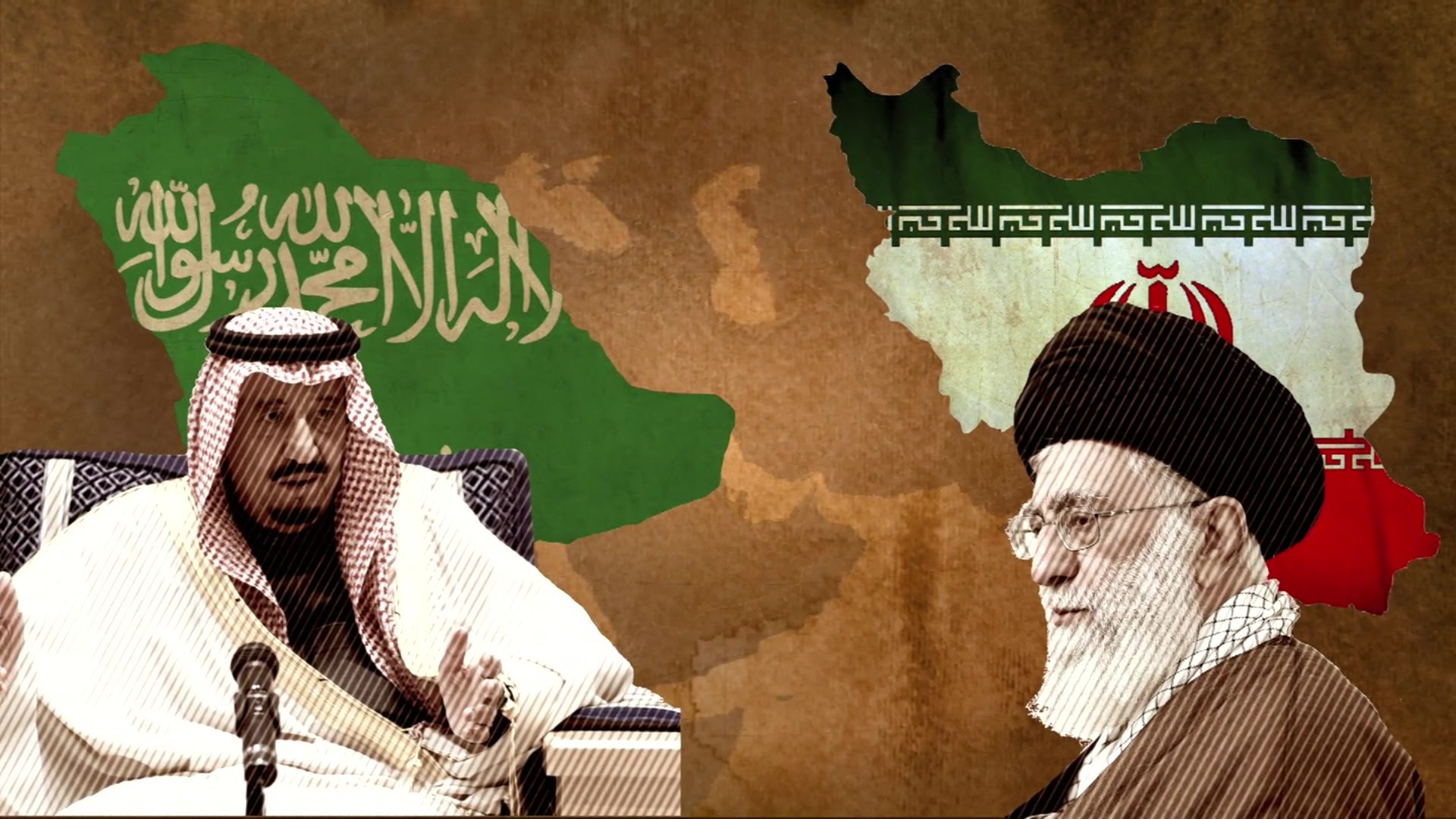 In fact, Iran was one of the key foci of Trump’s speech about combating terrorism that he delivered in Riyadh:

“But no discussion of stamping out this threat would be complete without mentioning the government that gives terrorists all three — safe harbor, financial backing, and the social standing needed for recruitment. It is a regime that is responsible for so much instability in the region. I am speaking of course of Iran.”

The warmonger-in-chief then went on to list Lebanon, Iraq and Yemen as examples of how Iran’s support for international terrorism is destabilizing the Middle East and, by extension, the world. That he could deliver such a speech in Saudi Arabia, an admitted and committed supporter of the I-CIA-SIS boogeyman that has torn Iraq apart in recent years, is only slightly less galling than the fact that Trump failed to mention his own country’s role in the destabilization of Iraq…or Syria…or Libya…or Afghanistan…or…or…or….

On the proxy war front, the deal specifically includes the sale of precision-guided munitions that the Obama administration blocked when the Yemen conflict began to turn into an embarrassing bloodbath.

On the real war front, the Saudis still are nowhere near the military capability they would need to launch a direct assault on Tehran. But making massive military purchases like this surely doesn’t pour any cold water on the simmering conflict, either. And the last thing we need is another active war front in the already-boiling Middle East.

3) The “Glowing Orb” is A Real-Life Crystal Ball 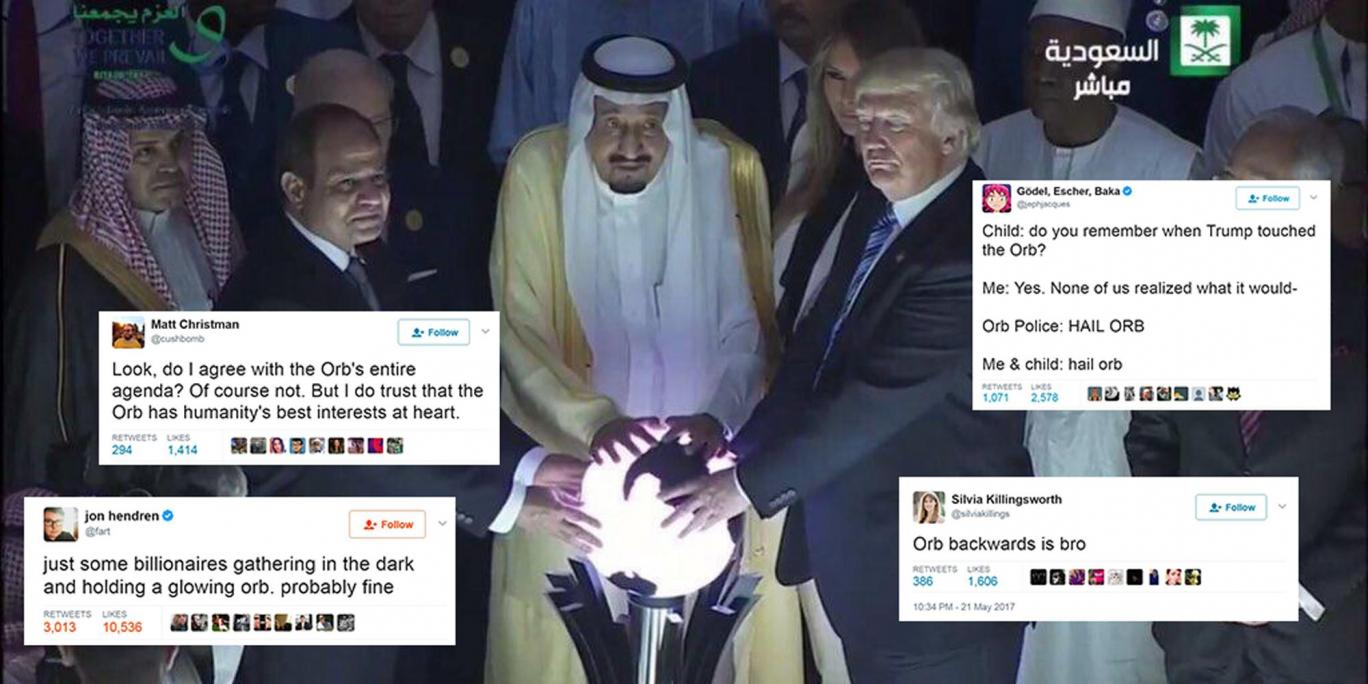 OK, OK, I know this isn’t technically a part of the arms deal, but it would be a crime to discuss the Saudi trip without mentioning the now-infamous orb. Instantly meme-ified, it got everyone talking, and chances are if there’s someone in your life who doesn’t know the first thing about politics, they’ve probably seen the snapshot of Trump, King Salman of Saudi Arabia and President Abdel Fattah el-Sisi of Egypt touching that creepy glowing orb…even if no one understands what the picture was all about.

It set social media on fire. The twitterati were out in full force trying to come up with the funniest caption for the scene. My personal favorite: The old one-two comedy routine of @zeddrebel (“quick! what would be a good word for a religion that worships a globe?”) and @ToddGolden2 (“Glow Ballism”). (Now click here.) But what was actually happening there, anyway? What is that orb?

Well, the photo was taken at the opening of the new “Global Center for Combating Extremist Ideology” (GCCEI), a billion-dollar state-of-the-art monitoring and operations center in the fight against international terror…in Riyadh? Hosted by the Saudis? The very government that has been funding and exporting these Wahabbi extremists and CIA dupes on jihads around the world for decades? The very concept is self-parodying.

And indeed, the Al Arabiya press release is full of meaningless, blatantly silly blather about the center’s “governance system that applies international management best practices” in producing “media content that confront [sic] the content of the radical thoughts [sic] in order to defy it.”

The whole thing becomes less jokey, though, when we read this:

“The center has developed innovative techniques that can monitor, process and analyze extremists’ speeches with high accuracy, all phases of data processing and analysis are done in no more than six seconds once the data or comments are posted on the Internet, allowing unprecedented levels of facing extremist activities in the digital world.”

It’s still quite vague as to what “techniques” are being employed here, but we have to consider the possibility (or should that be the certainty) that, buried amongst the hundreds of billions of dollars in deals that have just been announced, there may be some technology transfer or at least cooperation between the NSA and the GCCEI. After all, it’s no longer any secret that the US deep state owns the control tower to the worldwide panopticon known as the Internet, and as the suspicious leaks in recent years suggest, they’re more than willing to let some of those secrets out.

Is the GCCEI running some version of the NSA’s own Stellar Wind program? Have they joined the international spy grid that is being slotted together by folks like Bilderberger Peter Thiel, founder of Palantir Technologies? Palantir is, after all, the company that helped the NSA spy on the whole world. And Palantir is named after the “seeing stones” from the mythical Lord of the Rings saga by J. R. R. Tolkein.

By touching the orb and activating the Center, did Trump and Salman and el-Sisi activate a little palantir—a “seeing stone” that will become an important part of the supranational deep state spy grid, enabling its operatives to monitor every communication and every action of every human being on the planet? Did we just witness an occult ritual with a very real-world meaning hiding in plain sight?

The orb. The glowing orb. That crazy, creepy glowing orb. I’m sure that 1,000 years from now, the only thing historians will remember about our era is that a group of “dignitaries” touched a glowing orb in a darkened room and the Internet lost its collective mind. How do I know this to be so? Because the orb told me. cORBett out.

Brazil Health Officials: Zika Virus Is Not Responsible For Rise In Birth Defects, It’s Something Else

Fear surrounding the threat of Zika virus has plagued the media, and its steady spread across Latin America and Pacific island nations — along with its inevitable arrival in parts of the continental U.S. — has many worried. The mysterious virus, suspected of causing birth defects, has provoked the U.S. Centers for Disease Control and Prevention to update its Read More…

US Tells Israel “We Are Not Done With Syria”, Secret Anti-BDS Law In Spending Bill & Mattis Quits

Welcome to The Daily Wrap Up, a concise show dedicated to bringing you the most relevant independent news, as we see it, from the last 24 hours (12/21/18). As always, take the information discussed in the video below and research it for yourself, and come to your own conclusions. Anyone telling you what the truth Read More…