Dear diary, many of my colleagues are unhappy about the recent events in Syria. They are unhappy that Assad is still in power. However, I see the metaphorical glass as being half full. In a recent poll, 58% of Americans support the bombing of Syria and 19% have “no opinion.” This is wonderful news, since it shows how the vast majority of people are easily manipulated and are simply apathetic. In a democracy, the most important but least understood tool is propaganda. Let me share with you the fundamentals of a successful propaganda campaign.

Here are the five rules of public relations a.k.a propaganda:

Rule #1: The principle message has to be simple so that even a 5-year-old can understand. In this case, it was, “Assad used chemical weapons to kill innocent Syrians.” The secondary message was we should do something about it. Everyone who watched TV or read the mainstream/social media got this message loud and clear.

Rule #2: Make it emotional. Propaganda is just marketing. (In fact, the phrase Public Relations was coined to replace Propaganda when the latter became a dirty word after World War I). Every good commercial has an emotional aspect to it. Emotions stop you from thinking and analyzing. Thus, while selling Pepsi, marketers use sexy women, selling a war requires evoking fear and/or anger.

About 120 years ago, when the U.S. wanted to steal Cuba from Spain, it relied upon the exact playbook. “You furnish the pictures, and I’ll furnish the war,” said the newspaper oligarch William Randolph Hearst to his cartoonist. The pictures portrayed dying children and brutal Spanish authorities. (Although Spain is white, the picture on the right used a monstrous person with African American features, since a warmonger could also be racist in those days). 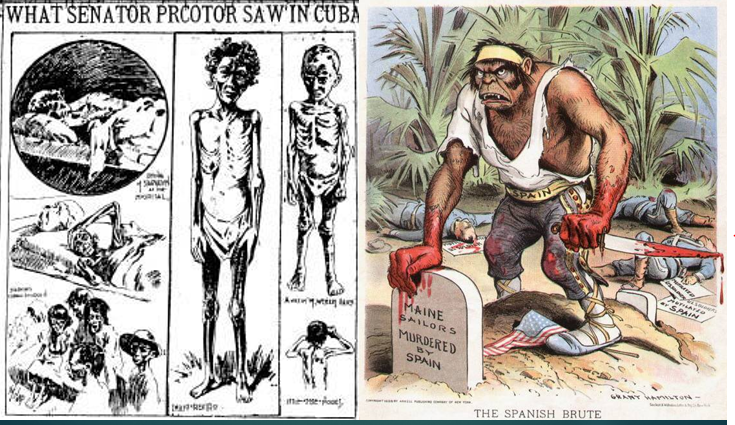 Today, the US government tells the White Helmets, “You furnish the videos, we’ll furnish the war.” It’s the same technique used over and over. Remember during Iraq War 1, when a girl testified before the Congress that Iraqi soldiers were killing newborn babies in incubators? Of course, it turned out to be fake news; and the girl turned out to be the daughter of the Kuwaiti Ambassador.

The Syrian war is also a great study in use of emotional language: “worst chemical attack in Syria in years” (a lie from NY Times that forgot its own article about 52+ chemical attacks by ISIS); “international outrage,” “shocked the world,” “horrific/deadly/ghastly/heinous chemical attack,” etc. Also, the Syrian government is always referred to as “regime” and Assad is always a “dictator” or a “butcher” who “kills his own people.” Every word and phrase is designed to have an emotional impact.

Rule #3: No debate allowed. The media and the pundits left absolutely no doubt who the culprit was. Within minutes after the release of pictures/videos, everyone was blaming Assad. So it didn’t matter if you listened to ABC, NBC, CBS, CNN, Fox, or read the NY Times, WaPo or HuffPo … everyone was singing the same tune. Tucker Carlson was the only mainstream person who went off the script, but we are taking care of him.

This kind of consistency is really important in a successful propaganda campaign. No one should be allowed to consider other alternatives – could the attack be staged, could it be a false flag, could it be fake, how do we know when/where the videos were taken, why is it that Assad’s chemical weapons kill only children and civilians and never the jihadists, why do the attacks happen only when Assad is winning, etc.?

There was also no discussion of evidence or proof. We see pictures and videos, and that’s enough. We have a doctor on site who says it’s Sarin or chlorine gas … end of story. Nobody discusses options such as should we send an international team of doctors and experts to the site, should we wait for an autopsy, should we get Assad to answer these charges (gasp!) and so on.

The US Establishment is the jury, judge and the prosecutor. The witness is Al Qaeda who supplies the pictures and the videos, but the average person doesn’t know that either.

The secondary message was also never debated. Even if you assume that the Syrian government used chemical weapons, why should the US do something about it? Is it a moral obligation that only falls on the US? Is it a legal obligation? Does the US intervene every time and anytime some country uses chemical weapons? How about non-chemical weapons? No such discussions are permitted.

Even the bombing was so ridiculous, but the average person doesn’t notice anything suspicious. For example, we bombed the Barzeh research facility that has been inspected and cleared by the OPCW many times, including once in Nov 2017. The fact is that it’s a civilian research and educational center:

Furthermore, the OPCW team had just arrived in Syria on April 13 when the trio of US/UK/France bombed the sites. Wouldn’t it make sense to send the OPCW team to inspect the buildings before bombing them? Also, if the buildings really had chemical weapons, wouldn’t bombing them disperse the chemicals and kill thousands of civilians nearby? The real proof for the civilian nature of these buildings is that within a couple of hours after the bombing, there were Syrian journalists and soldiers walking through the rubble of these lethal “chemical weapons factories.”

Thinking only complicates matters and ruins everything. That’s why propaganda has to keep everything simple.

Rule #4: You have to viciously attack anyone who questions the official narrative. We did a great job of attacking independent journalists and bloggers. Vanessa Beeley, Eva Bartlett and Twitter influencers such as @PartisanGirl and @Ian56789 were all maligned as “Russian bots.” Ian even got banned from Twitter for a few days. Sites such as 21st Century Wire and Russia Insider were brought down by our hackers during the strikes on Syria.

Rule #5: Repetition is key in any successful campaign – selling a product, a politician or a war. Thus the media saturated the airwaves and the Internet with shocking language and pictures and videos. The West really has only one media outlet, but it comes in hundreds and thousands of different names in order to give the illusion of choice and diversity. Thus when the same message is repeated so many times by so many people, it comes becomes the truth.

So, you see, it doesn’t matter if Assad is still in power. The most important thing is that people are gullible and malleable, since that allows us to keep the war going and eventually achieve our goals. I assure you, we will get Syria and then we will get Iran. Yes, it will be a humanitarian disaster of epic proportion, but rest assured that the people of the West will feel good about it. That’s the power of propaganda!

Chris Kanthan
Chris Kanthan is the author of a new book, Deconstructing the Syrian War. Chris lives in the San Francisco Bay Area, has traveled to 35 countries, and writes about world affairs, politics, economy and health. His other book is Deconstructing Monsanto. Follow him on Twitter: @GMOChannel
http://www.activistpost.com

Adding to a growing list of UN reports released recently all showing a surge in Afghan civilian casualties in different manners, a Wednesday report was released showing that civilian deaths are surging from US and Afghan government airstrikes. This has been ongoing through the year, with a decrease in US airstrikes in Iraq and Syria leading to more warplanes committed Read More…

For many people still unaware, there are a variety of “free trade” deals being negotiated and worked on between various swaths of countries all over the world. As we have reported on several times at The Last American Vagabond, TPP is one of those under the radar trade deals that is attempting to be passed Read More…

Thinking About Voting? Read This First

Colin Kaepernick has been abstaining from standing for the national anthem. Self-styled patriots have been losing their minds over it. That is because they are true believers in a cult. The cult is the State. All states are cults: religions. And like all religions, states have sacraments, including holy rituals. The national anthem is one Read More…