Imagine, if you will, a documentary on population control and resource restriction produced by the United Nations.

A documentary that opens with Rue McClanahan of “Golden Girls” fame pretending to be sexually aroused by the prospect of hundreds of world leaders cooped up in a UN conference room talking about the environment.

A documentary featuring that renowned environmental crusader, John D. Rockefeller III, as an “expert” commentator on the dangers of overpopulation.

A documentary narrated by no less a personage than Perry Mason himself, Raymond Burr.

A documentary in which Hugh Downs, standing in front of the UN headquarters as the melodramatic soundtrack swells in the background, tells us that the only hope for the “problem” of humanity on planet earth lies with the UN.

Yes, “Survival of Spaceship Earth” is the UN globalist enviroganda flick that has something for everyone.

Are you a misanthropic curmudgeon who believes human life is a stain upon the planet and needs to be eradicated? Don’t worry, this documentary explains right up front that “the basic cause of the problem is people” and follows that up with one hour of anti-human vitriol and overpopulation fear-mongering.

Are you a fan of John Holdren, the Obama-era science czar who predicted one billion people could die due to climate change by 2020 (spoiler: they won’t) and co-wrote a book with perpetually-wrong Paul Ehrlich advocating adding sterilants to the water supply to reduce the population? Or perhaps you go gaga for the scientific pronouncements of famed Rockefeller researcher Rene Dubos, who helped spearhead the UN’s 1972 Stockholm summit on the environment? You’ll be pleased as punch, then, to know that both Holdren and Dubos were scientific advisors to this very documentary! (Dubos even gets screen time as a talking head!)

And of course there’s the tributes to the United Nations itself, so lovingly portrayed by its very own document as the savior of humanity, the benevolent globalist organization that is the only hope for humanity to solve the people problem. If only we could destroy all sovereignty and hand control over to our wise technocratic overlords! They’d know what to do about the environment!

Oh, and did you say you only watch documentaries that are funded by the foundations of the loving billionaire philanthropists? Then boy do I have some good news for you: 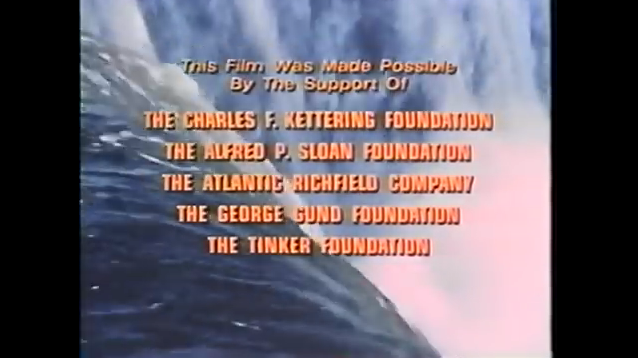 But you didn’t see (because time constraints compelled me to take it out) Dr. Harrison Brown (another of the scientific advisors on the film) telling Perry Mason that the concept of sovereignty has to be discarded so that the UN can save the universe…or the globe.

RAYMOND BURR: “Dr. Brown, if you could address the delegates at the Stockholm Conference, what would you say?”

DR. HARRISON BROWN: “I believe I would say that we are to solve the very crucial problems which are confronting mankind collectively. A higher level of cooperation, a higher level of morality, a higher level of discipline will be necessary for all mankind. And I would hope that the delegates from this conference would emerge with a sufficient understanding of these problems and their seriousness. To express a willingness to delegate a part of the sovereignty which they believe their nations have over these problems to an international organization. To the United Nations.”

But, to be fair, the documentary does broach one other solution to our IMPENDING ECOLOGICAL APOCALYPSE beyond simply giving up control to the wise stewards of the United Nations: “It is only in the controlled use of technology that man can hope to survive.”

“Among the new technologies being developed for agriculture is a remarkable technique for stabilizing the earth with oil to retain moisture and to stop erosion.”

Yes, this gem of a movie was first released in 1972 in preparation for the then-upcoming Earth Summit in Stockholm put together by Maurice Strong, the consummate Rockefeller-backed oil millionaire-cum-environmentalist who should be familiar by now to my regular readers and listeners. It was then exhumed in 1992 and given the Golden Girls intro treatment in preparation for the second Earth Summit taking place in Rio that year. Even then it must have seemed like a ridiculous relic from another era. How much more insane does this 45 year old attempt at environmental fear-mongering look today? (About as ridiculous as An Inconvenient Truth is going to look to our children’s generation, I suppose, what with it’s drowning polar bears and hydraulic-operated CO2 fear porn.)

“In searching for a common enemy against whom we can unite, we came up with the idea that pollution, the threat of global warming, water shortages, famine and the like, would fit the bill. In their totality and their interactions these phenomena do constitute a common threat which must be confronted by everyone together. But in designating these dangers as the enemy, we fall into the trap, which we have already warned readers about, namely mistaking symptoms for causes. All these dangers are caused by human intervention in natural processes, and it is only through changed attitudes and behaviour that they can be overcome. The real enemy then is humanity itself.”

Or, as Survival of Spaceship Earth put it nearly two decades earlier: “The basic cause of the problem is people.”

But I’ve already over-talked it. Time for me to shut my yap and let you get on with soaking it all in. Happy viewing!

Welcome to The Daily Wrap Up, a concise show dedicated to bringing you the most relevant independent news, as we see it, from the last 24 hours (9/14/18). As always, take the information discussed in the video below and research it for yourself, and come to your own conclusions. Anyone telling you what the truth Read More…

Absolute Proof That Our Elections Are Bought

Just how fake are United States elections? We know that the propaganda surrounding the four-year election cycle just gets worse every time. But the revelations of corruption coming from the DNC show next-level orchestration and rigging. The truth is that both sides are bought and paid for. It’s a *S*election, plain and simple. Like chess Read More…

Over the weekend, US warplanes carried out at least six airstrikes against the coastal town of Gandarsh, Somalia. US African Command (Africom) says 62 people were killed in the strikes, and all were “terrorists” from al-Shabaab. 34 people were killed on Saturday, and 28 more on Sunday. The identities of the slain are not clear, and Read More…