If Americans weren’t already aware that they were living in a soft-core police state without consent, between whistleblowers Thomas Drake, William Binney, and the giant himself, Ed Snowden, it’s a wonder the NSA hasn’t been shut down yet. Never before has it been more evident that the events of 9/11 were used as an excuse to initiate an all-encompassing overhaul of American politics. This was a carefully strategized secret reformation of the government pushed for by big bankster families with élite blood lines that likely date back far before this country was ever founded. The fact of the matter is that Americans are dealing with a sinister and infected tumor of a government that has absolutely no integrity or moral fortitude left within itself.

Today, what America stands for is War, Surveillance, and Industry—the freedom, liberty and all those other hollow words have rusted from inaction and been tossed by the wayside because of it. Sooner or later, people will have to realize that the government’s words are nothing but fodder if there are not actions behind them. With often very little but regurgitated brainwash from the Baby-boomer generation, and others conjoined to it, the infrastructure of the American political process has completely eroded and caved in on itself. These days, the Middle Class of America has become everyone in the family working at least one job full-time just to simply put food on the table for a week, and pray that they can make the payment on the house they used to own, or at least have the money for. Meanwhile, as all this occurs, the government continues to “lose” billions of taxpayer dollars annually into the NSA black-budget programs, the NASA black budget, and other secret programs.

The real beauty of Ed Snowden is that—love him or hate him—he completely changed the game. With his whistleblowing, Snowden was able to very clearly and blatantly show every individual in America just how much their political power had eroded and become irrelevant in the eyes of their government, and suddenly, everyone in Suburbia America was allowed just a bit of a closer look as to how they had all been screwed: they had been culled. As they hid behind the hollow words of their freedoms and liberties, their government sneakily took all the assets out of these words and tossed the empty concepts back at the people. More so than before, Snowden and Greenwald are changing the game today, and with all the classified leaks to come, many are in anticipation across the world to see what the “Gatekeeper” Greenwald will be releasing next.

As always, predictions on the internet range from interesting to downright bizarre. But with Snowden still currently nestled in Russia with Putin, and the current state of geopolitical affairs as they are, many still question just what exactly Ed Snowden’s motives are. With Russia’s extensive release of covered-up 9/11 information to the public, their new determination to eliminate ISIS, and the global economic affair straining Russian-American relations even further, one can’t help but wonder what this NSA whistleblower is personally considering within the situation. 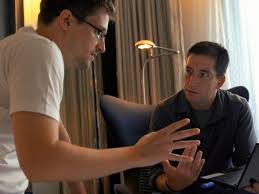 The internet doesn’t exactly need another rehash of the Snowden story, as this has already been shouted by the mainstream media at the top of its lungs for quite some time now. But while a lot of this is slanted cultural half-truths, Laura Poitras’ documentary Citizenfour

(the footage of her, Snowden, and Greenwald meeting for the first time in a hotel room in Hong Kong) is dark and raw and chilling in its simplicity, but also beautiful and captivating for its brutally honest portrayal of human interaction, both in the hotel room and across the globe. However, for those who have learned to villainize the Mainstream Media puppets for what they truly are, it is a bit harder to accept Snowden as this “Savior from Surveillance” that the Mainstream has painted him as, when it is this same Mainstream that is one of the most devious puppets for the elitist shadow government.

While this is an incredibly valid point, it’s really quite hard to imagine any scenario where the US government would deem this type of data leak an appropriate cull of the masses. Also, it’s become almost an unwritten understanding in alternative politics that Putin had his way with all of Snowden’s files for the forty days that he was kept in Russian “holding,” some even speculating that this is where Russia has received its tremendous amount of damning 9/11 data releases, showing the inherent dishonesty in the official story (most if not all of these stories released by Russia Today).

Indeed, some might be inclined to think right off the bat that this makes sense since Snowden has helped bring about a great deal of 9/11 Truth, but in reality, it should be heavily noted that Snowden and Greenwald have never revealed a single stitch of information regarding 9/11 truth, and this has become an incredibly misleading piece to the story. Situationally, it seems a bit more likely that this has been a classic case of the old “telephone game” that simply hasn’t been resolved yet. Some argue that this is where a theoretically two-faced Snowden would show his true colors, because if he really had the access to the info he says he did, and he believes in what he thinks about the people, then why would he not want the people to known about 9/11 Truth? Others might argue that this is because the official 9/11 report is not inaccurate, in which case one should review the website of Architects and Engineers for 9/11 Truth.

So with this in mind, why has Snowden just decided to simply leave this one be? Well, assuming that he’s not playing both sides here, there are three fairly reasonable possible explanations for this. Firstly, in the sense that you could generally consider Ed Snowden as a researcher bringing his proposed findings to the table, as one could also consider of Luke Rudkowski or even Dr. Gabor Mate’ for example, then it would simply make sense that he as a researcher would stick to his field of research. No one sees Rudkowski leading people through intensive shamanic ayahuascha sessions, and nor do they see Mate’ sneaking into any Bilderberg conferences and getting kicked out. So out of the same principle it would make sense that people wouldn’t see anything about 9/11 from Snowden because simply, he’s not the “9/11 Guy.” That’s someone else’s bag of tricks, Snowden is quite blatantly about the internet rights and electronic surveillance. The other two interesting points of note are the fact that Snowden and Greenwald, since they have not released all their information, could theoretically be waiting to release information on 9/11 (however this doesn’t seem very likely); and the second is that, while Snowden has made no effort to advance 9/11 Truth, he has made his stance on terrorism very clear since the beginning: there is violence and bigotry everywhere, and the term “terrorism” is a “red herring”, which is something that misleads or distracts from a particularly important issue.

Lastly, a final addition against this notion that Snowden is still a good ol’ boy of the NSA, is simply the degrees of social interaction that are documented here. If he’s a spy, then that means either he fooled or was colluding with Julian Assange, Glenn Greenwald, Laura Poitras, Sarah Harrison, and more names even still, and that they would all be connected to the NSA to some degree, and this seems beyond far-fetched. If Snowden is a plant, then he deserves an Oscar for his work in Citizenfour, hands down.

However, even if people can consider Snowden a genuine guy, it is still very important for all to remember that there’s a difference between the man and his ideas, and what the media is telling everyone this man and his ideas are. Without any need for examples here, everyone is aware how convoluted, confusing, and technical this game of geopolitical espionage has become. One should rest assured knowing that intense personal research into the matter of Edward Snowden still leaves a great amount of questions, so undoubtedly there will be no satisfying answers from the Mainstream Media.

With tension continuing to raise between Russia and America, largely through Syrian proxy warfare, it becomes more and more curious that Mr. Snowden remains in Putin’s domain. Of course, he doesn’t have very much of a choice at this juncture in time, but even still, one can’t help but wonder what exactly all his time has been spent doing there, and how much of the Russian government he has seen. After all, Russia has had no shortage of confidential files about America to release to the public. With Putin’s agenda now being the termination of the pesky proxy ISIS, the information that can be read in-between the lines of these events continues to grow—although is still quite hazy. Greenwald’s continued progress with big budgets on The Intercept prove promising if he can keep the corporate hands out of his pockets, so to speak, and the controversy that Snowden, Assange, Manning, and the like have sparked is not apt to die down any time soon. In the wake of events Hollywood wished James Bond could touch, citizens across the globe continue to wait in anticipation for the continued unfolding of this story, all of them wondering just what exactly Ed Snowden’s endgame is.

The Israeli army carried out scores of air strikes across the besieged Gaza Strip in the early hours of Saturday, in the highest-intensity offensive on the coastal Palestinian territory since the summer. The Israeli army launched at least 87 air strikes, Israeli news outlet Ynet reported, saying it was in response to some 34 rockets Read More…

Google Is Quietly Recording Everything You Do

Even though this may not come as a surprise to most of you, it is still something that is happening all around us, all the time, and right under our noses: Google is quietly recording everything we do, from conversations we have over the phone and texts to videos we send and create over webcams and Read More…