So many anti-protest bills have been passed since Trump’s election that the ACLU has launched its own interactive map just to track the legislation. At the writing of this article, at least 25 bills have been introduced across 18 different states.

Unsurprisingly, the North Dakota State legislature has the most anti-protest bills of all the States, with six introduced since November. What is striking about the Statewide legislation, however, is not the quantity of the bills, but the similarities between them.

When Anti-Media first began monitoring the trend in November, Washington state Senator Doug Ericksen had announced plans to introduce a bill that would criminalize demonstrators as “‘Economic Terrorists.” In March, North Carolina also passed a bill creating a criminal classification for “economic terrorism.”

By January, five other ‘anti-protest’ bills had emerged in states across the country, including a particularly contentious bill introduced in North Dakota that would exempt motorists from charges if they “accidentally” hit a demonstrator on the freeway. A nearly identical bill was introduced in the Florida legislature on the same day. Later, a version was also introduced in Tennessee.

Other sets of near-identical legislation include Missouri and North Dakota bills that would prohibit the use of masks during protest and bills introduced in Oklahoma and North Dakota that would increase penalties for trespassing on “critical infrastructure facilities” such crude oil pipelines.

This is not to mention the entire crop of ‘anti-obstruction’ bills introduced in seven different states that would increase penalties for protesters who obstruct traffic.

Related Reading: The Comey Distraction, A Voided Constitution And The Million Dollar Protest

While there are some bills that are unique, like an Oregon bill that would require community college or public universities to expel any student convicted of rioting, the majority of the bills share such strikingly similar themes and language that it would appear as though these state legislators are working from the same legal template.

This begs the question, who is making the template?

As Traci Yoder of the National Lawyers Guild explains, it has become such common practice for special interests groups to draft model legislation at both the state and federal level that it can be difficult to say with certainty who or what is behind the current wave of anti-protest legislation.

The “obvious suspect,” Yoder says, would be the American Legislative Exchange Council, or ALEC, the influential lobbying group comprised of corporate representatives and state legislators who vote as equals on model legislation, which they then hand off to lawmakers.

ALEC gained mass media attention when it was discovered to be the driving force behind the controversial “Stand Your Ground” law that was used to justify the murder of Trayvon Martin, but it was working behind the scenes long before that. It drafts a self-proclaimed 1,000 bills per year, 20% of which become laws.

Of the 26 bills Anti-Media examined, ten were authored or sponsored by at least one known ALEC-affiliated politician, often times more.

If ALEC is behind the recent wave of recent anti-protest bills, it wouldn’t be the first time the ‘non-profit’ organization has sponsored such legislation. In 2003, ALEC-crafted legislation for states that would have criminalized animal rights activists protesters as “eco-terrorists” — in conjunction with their push for the federal Animal Enterprise Terrorism Act (AETA), which they had also drafted. AETA was passed in 2006.

“While there is no indication that anti-protest legislation is on ALEC’s current agenda, it is worth noting that the kinds of protests being targeted are all in conflict with ALEC’s anti- worker and anti-environmental platform,” Yoder wrote, referencing ALEC’s 2016 agenda.

“Now more than ever, your focus should be on the states. Right now, we are at a crossroads in American history where an incredible number of important decisions about our future are going to be made—and they are going to be made by the states,”  ALEC Chief Executive Officer Lisa B. Nelson writes.

Other likely suspects, Yoder writes, are police unions such as the Police Executive Research Forum.

“Given the pro-policing approach of the Trump administration, it would be unsurprising if law enforcement organizations prioritized criminalizing protest activity.”

Of the 25 bills introduced since November, seven have been defeated or postponed indefinitely. But this is far from over. In fact, if history is any indicator, the next iteration of anti-protest laws will come — only they will be more subversive.

“As we saw from the AETA/ALEC example, we should expect to see parts of these bills introduced elsewhere should they fail in their current form.”

Here is a rundown of the latest anti-protest legislation around the country: 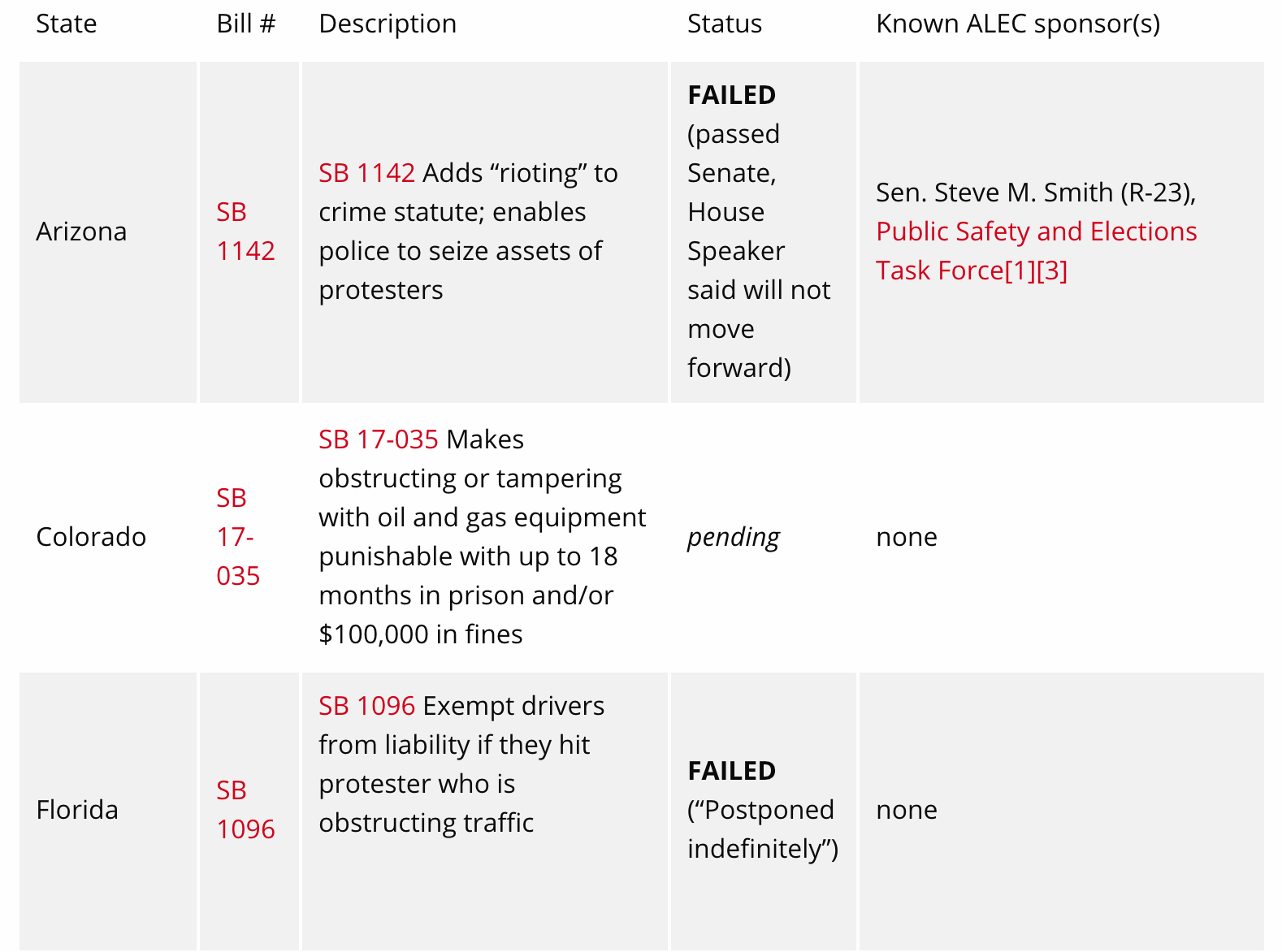 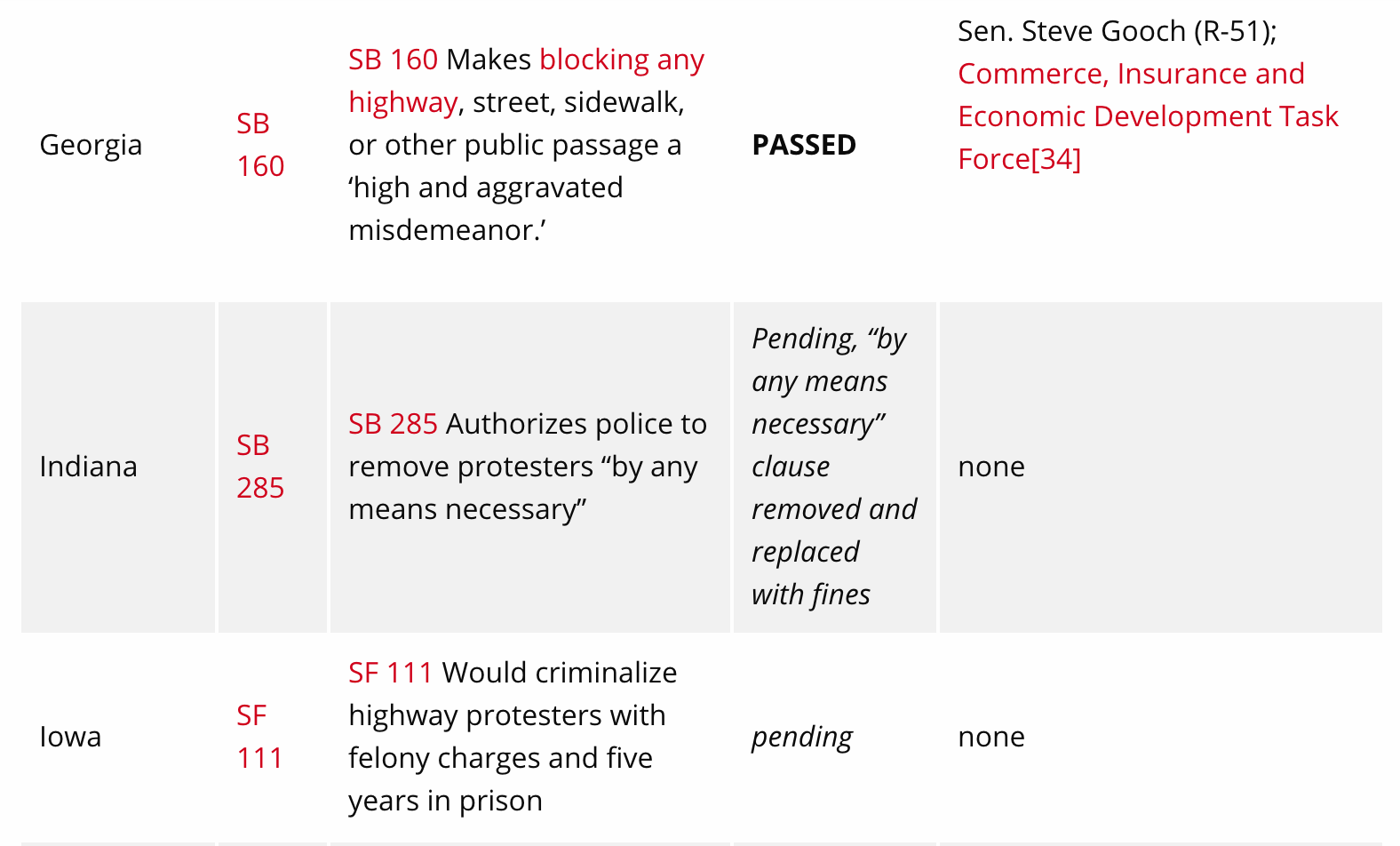 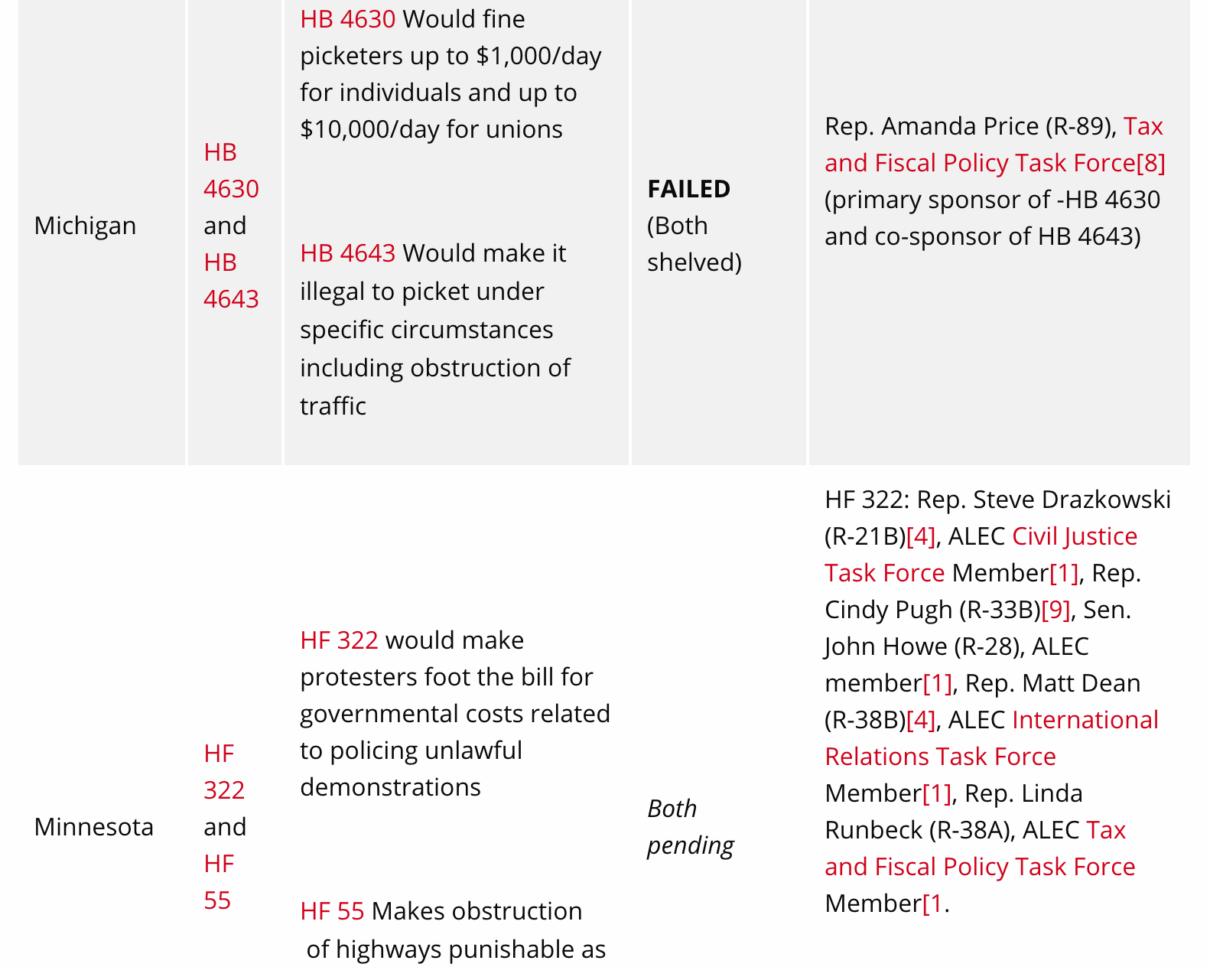 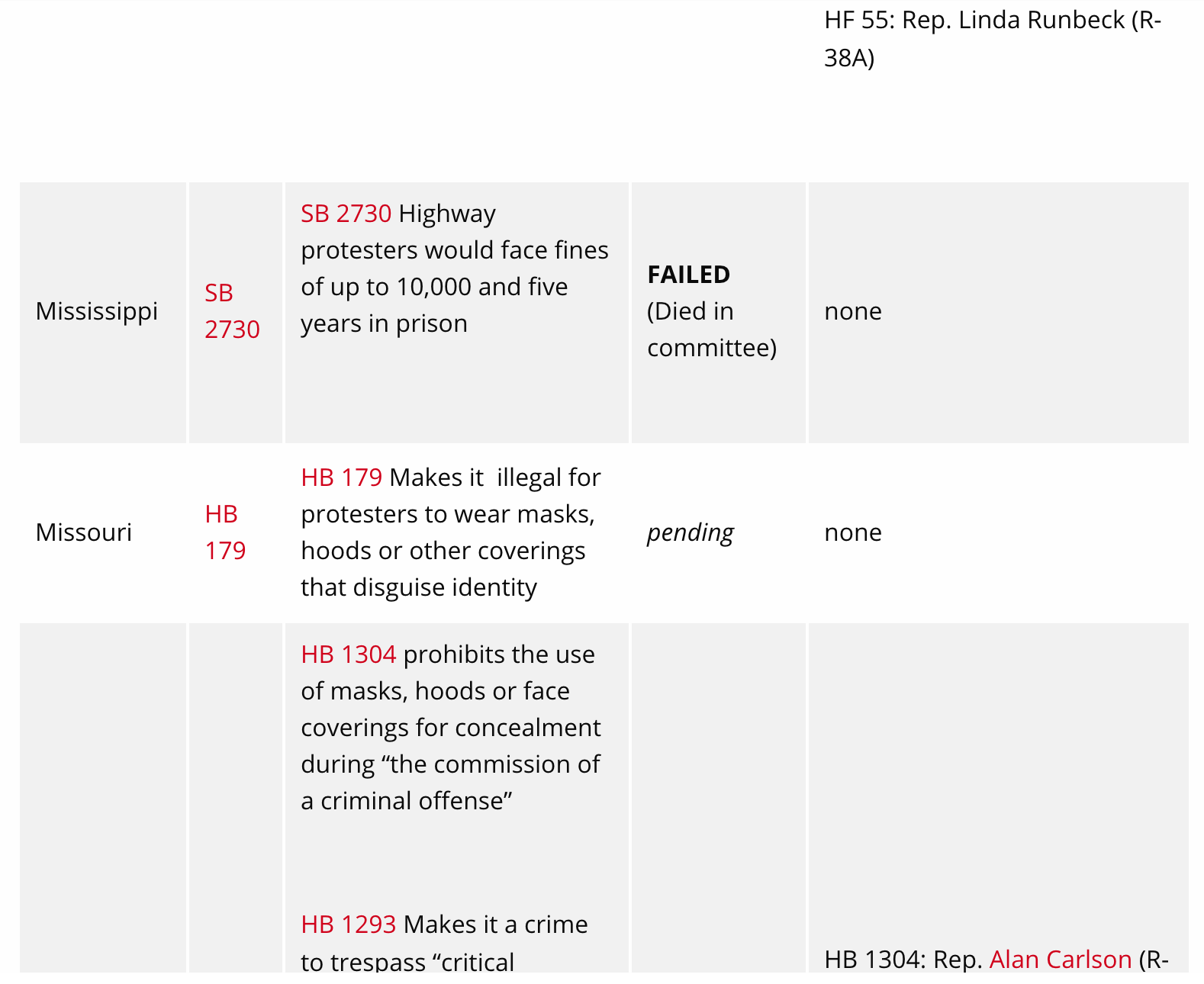 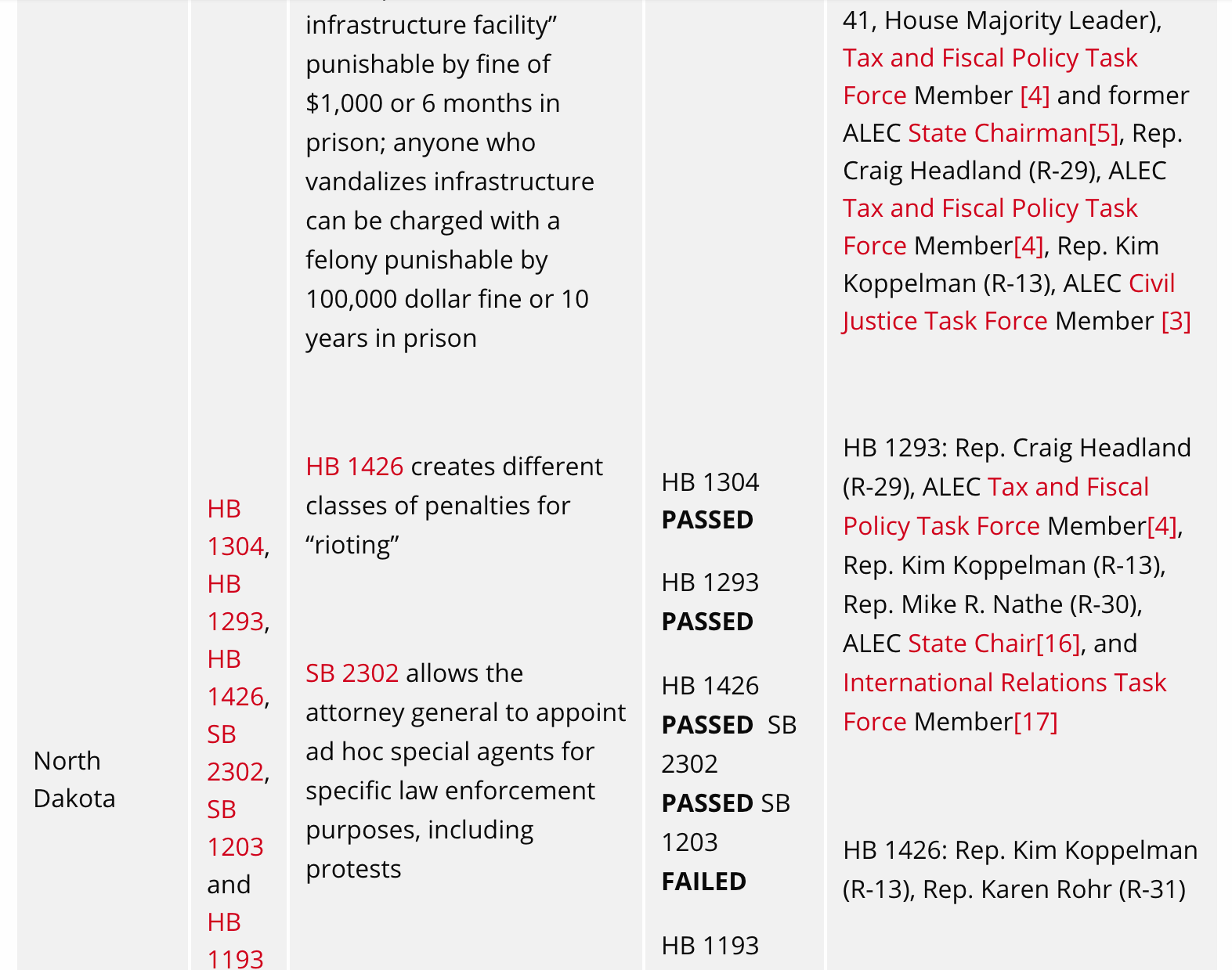 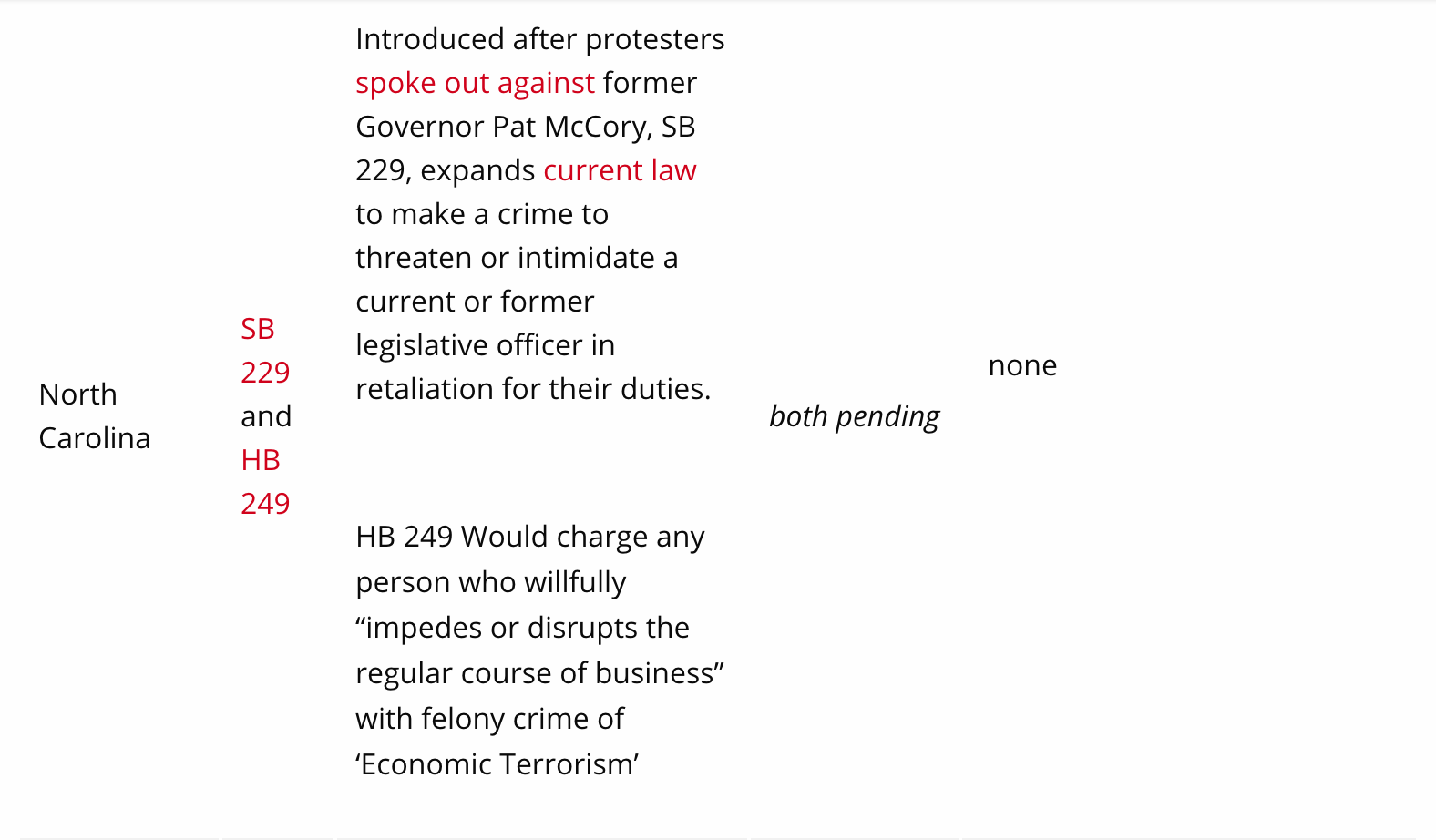 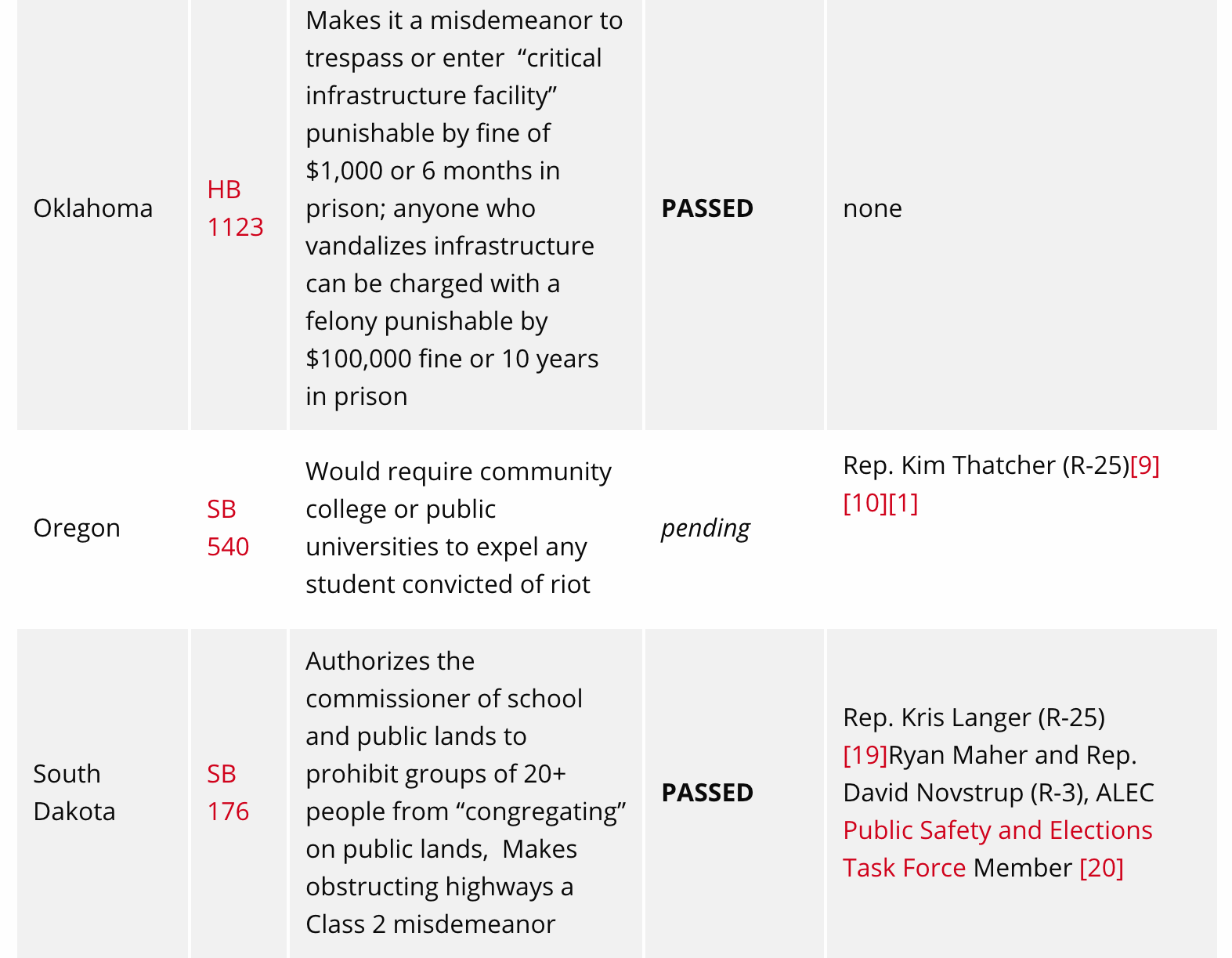 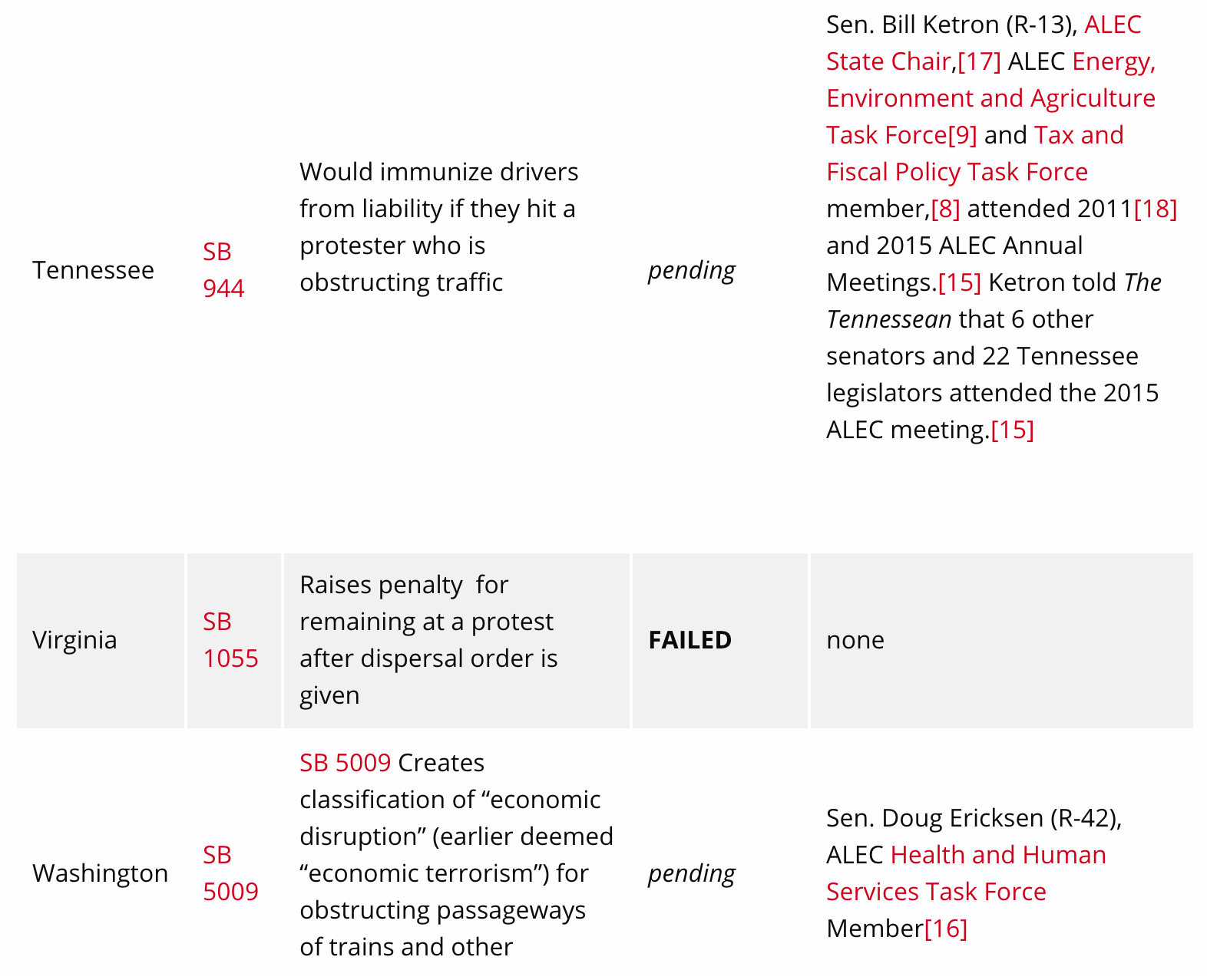 The Truth About Russiagate: What The Media Doesn’t Want You To Know

As the U.S. government doles out tens of millions of dollars to “combat Russian propaganda,” one result is a slew of new “studies” by “scholars” and “researchers” auditioning for the loot. The “Field of Dreams” slogan for America’s NGOs should be: “If you pay for it, we will come.” And right now, tens of millions Read More…

Jeffrey Epstein has agreed to a financial settlement and issued an apology to Bradley Edwards, the attorney representing several of Epstein’s victims. West Palm Beach, Florida  — Jeffrey Epstein has apologized for filing a malicious lawsuit against attorney Bradley Edwards. The apology and a confidential financial settlement officially bring an end to the lawsuit which was peripheral Read More…

In the wake of 9/11, the U.S. government began creating what has now become an “unprecedented buildup” of secret laws, and even the recent public backlash against them has not stopped widespread use of covert rules that impact Americans’ everyday lives without their knowledge, according to a new report from the Brennan Center for Justice. Read More…