It’s official: as of midnight Saturday, the US government has shut down following a failure in the Senate to strike a funding deal. Government funding was due to run out after Dec. 8 but was twice extended, most recently through Jan. 19, at which point the US encountered what’s officially called a “spending gap,” which triggers an official halt to Washington’s work.

In retrospect, this is hardly a novel development, as history shows there have been 18 previous closures starting in 1976, with the last one taking place in September 2013. Almost all of the funding gaps occurred between FY1977 and FY1995. During this 19-fiscal-year period, 15 funding gaps occurred. 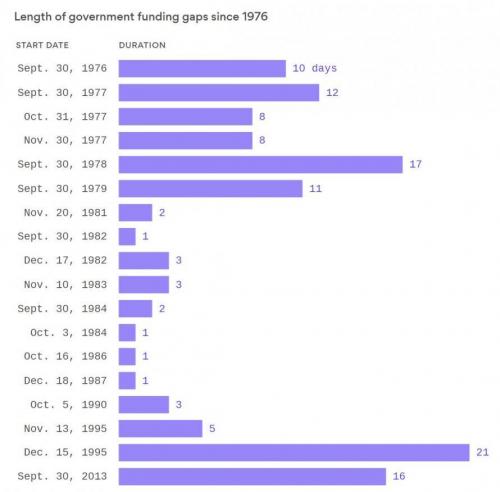 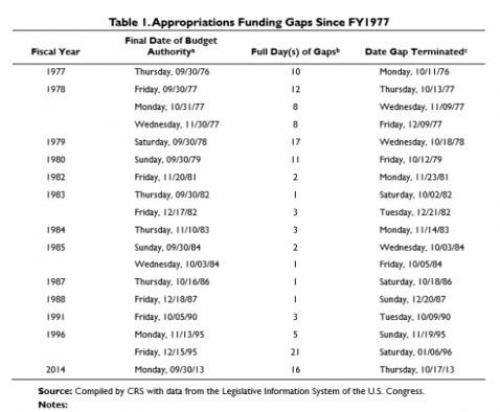 According to the CRO, funding gaps have ranged in duration from one to 21 full days, with six of the eight lengthiest funding gaps, lasting between eight days and 17 days, occurred between FY1977 and FY1980—before the Civiletti opinions were issued in 1980 and early 1981. After the issuance of these opinions, the duration of funding gaps in general shortened considerably, typically ranging from one day to three days. Of these, most occurred over a weekend.

So now that the US government is taking some time off for only the second time this century, here is a summary of what actually is shut down until the funding gap is closed, courtesy of Bloomberg.

1. What happens if the government shuts down?

Many, though not all, federal government functions are frozen, and many, though not all, federal employees are furloughed. Agencies in the executive branch, the one with the largest workforce and budget, regularly review shutdown plans that spell out what work must continue, and how many employees will be retained, during a “short” lapse (one to five days) and one that lasts longer.

The ones that draw headlines are closures of national parks, monuments and the Smithsonian museums in Washington. Other activities that may stop if the shutdown lasts more than a few days include the processing of applications for passports and visas; new enrollments in experimental treatments under the National Institutes for Health; and the maintenance of U.S. government websites, including ones used by businesses and researchers. Mortgage approvals can be delayed by furloughs at the Internal Revenue Service and the Federal Housing Administration. The last shutdown, which lasted 16 days in 2013, delayed release of Labor Department monthly employment reports, Commerce Department data on retail sales and housing starts and a monthly Fed report on industrial production that uses Labor Department data. Also delayed was approval of drilling applications at the Bureau of Land Management, consideration of applications for small business loans and the start of the Alaska crab season, which relies on harvest levels apportioned by the National Oceanic and Atmospheric Administration.

A breakdown by organization:

The Treasury Department, which includes the IRS, will send home more than 83 percent of its 88,268 workers.

The Executive Office of the President will be dramatically pared down, according to a memo released on Friday night.

Operations at the Securities and Exchange Commission are set to be sharply curtailed.

At the country’s main swaps regulator, the vast majority of activity will likewise grind to a halt.

The shutdown is likely to postpone the release of market-moving economic data, depending how long it continues.

Many programs at the Department of Labor designed to help workers will stop. Other federal offices designed to protect workers’ rights will also close their doors.

The law exempts from the shutdown those employees who are deemed necessary to protect life or property. Most types of law enforcement and criminal justice fit into that category.

The effects of a shutdown on foreign and trade policy may be minimal.

About half the staff at the Department of Health and Human Services will be furloughed, according to a plan posted on the department’s website Friday. The resulting changes will reverberate across a range of functions that affect the average person.

Activities related to national security (like the military services), safety and order (air traffic control, law enforcement) and medical care (veterans’ hospitals) are among the essential activities that carry on. So does the U.S. mail, since the Postal Service has its own funding stream. U.S. Treasury debt auctions continue, Social Security and Medicare checks get mailed, food stamps are distributed. Federal courts are open but their work is subject to disruption.

4. How many federal employees stay home?

In the 2013 shutdown, the number of executive-branch employees who were furloughed on a given day peaked at 850,000, or about 40 percent of the workforce.

5. Do federal employees get paid?

Eventually. When a shutdown happens, most federal employees — there are about 2.8 million of them now — are placed on unpaid furlough. Though there “appears to be no guarantee” that they will eventually be paid, in practice they always have been, retroactively, via legislation passed by Congress, according to the Congressional Research Service.

6. How often does this happen?

There have been 12 shutdowns since 1981, ranging in duration from a single day to 21 days, according to the Congressional Research Service. The 21-day one, in December 1995 and January 1996, was a famous budget showdown that pitted President Bill Clinton, a Democrat, and the Republican House speaker, Newt Gingrich. Shutdowns over budget disagreements are different (and less grave) than what would happen if the U.S. breached its debt ceiling and defaulted on some of its obligations. That’s never happened — though its specter, too, will grow if Congress doesn’t reach a budget deal in the next several weeks.

Until then, “funding gaps” didn’t result in shutdowns; agencies operated mostly as normal, and their expenses were covered retroactively once a deal was reached. Benjamin Civiletti, attorney general under President Jimmy Carter, put an end to that. With legal opinions issued in 1980 and 1981, he established that government work generally must cease until Congress agrees to pay for it. His rulings were codified in the Antideficiency Act, which, in theory at least, authorizes fines or prison terms to federal employees who dare work for free during a shutdown.

8. How Does the Market React

Markets have tended to shrug off shutdowns as long as the debt limit is not involved. The 1995, 1995-96, and 2013 government shutdowns had a modest effect on financial markets. The dollar weakened slightly in all three cases in the few days following each shutdown, with a further leg down in 2013 as the debt limit deadline approached. Treasury yields did not react meaningfully at the start of these shutdowns. The equity market reaction was inconsistent, with a slight decline in the early days of the December 1995 and October 2013 episodes, but no real change around the November 1995 shutdowns. 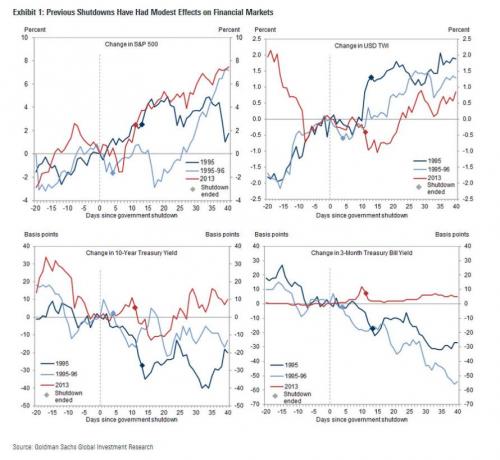 This time around, the debt limit deadline is around six weeks away from the Treasury’s target, and even farther from our own estimate, so unless the shutdown lasts for over a month, the market should largely ignore it.

Weber County, UT — Enedina Stanger is a wife, a mother of two, and now, thanks to the state of Utah, a convict. She also suffers from a rare genetic disorder called Ehlers-Danlo Syndrome (EDS). Stanger, who relies on a wheelchair to move around, has been battling EDS for most of her life. Stanger’s EDS causes her excruciating pain because Read More…

President Trump seems to be impatiently racing toward at least one disastrous war. Maybe two. The big question is who will be first? North Korea or Iran? Over the past several days President Trump has sent two nuclear-capable B-1 bombers over the Korean peninsula to send a clear message that he is ready to attack Read More…

As military drills between allies the United States and South Korea continue in East Asia, North Korea has just released a propaganda video that depicts the North blowing up a U.S. aircraft carrier and a B-1B bomber. “So pathetic. Nuclear aircraft carrier of the Sea is just a creature metamorphoses that would die with a Read More…

One Reply to “Now That The Government Has Shut Down, Here’s What Actually “Shuts Down””